Although 2014 got off to a slow and chilly start, demand for chemicals returned in the second quarter, helping to raise both sales and earnings in the first half of the year at 11 of 18 firms tracked by C&EN. In total, companies saw sales edge up 0.9% and earnings grow 2.0%.

Those figures would have been sunnier without the results from fertilizer producer Mosaic, which suffered from low potash prices. Subtracting Mosaic, sales for the other firms were 1.5% higher and earnings jumped 6.5%.

In fact, seven of the 18 firms posted earnings increases of more than 10%, including industry majors Dow Chemical, Huntsman Corp., Celanese, and Ashland. These diversified firms reported increased demand from end markets such as food, energy, automotive, coatings, and portable electronics. For the most part, earnings met or beat analysts’ expectations. This gave chemical executives the confidence to assure investors that even higher earnings are in the cards for the future.

At Dow, strong growth in several businesses pushed earnings up 16.9% in the first half on a 1.4% increase in sales. The firm saw demand growth from both industrial and consumer-market customers in the second quarter, according to Chief Executive Officer Andrew N. Liveris. Still, in a conference call with analysts, Liveris said Dow isn’t taking its eye off productivity and profit margin growth. “Our unrelenting focus remains on generating returns that exceed the cost of capital, generating cash, and rewarding our shareholders,” he said.

Meanwhile, Liveris is clearing the way for businesses that are in a position to grow. Sales of microbial control products used by the North American energy sector saw double-digit increases. Demand for other functional materials is on a positive trend, he remarked, thanks to the food, pharmaceutical, and personal care markets.

Dow saw higher demand for printed circuit board materials used in smartphones and automobiles built in Asia, and demand for coatings materials, both industrial and architectural, was higher in nearly all regions.

At Dow Automotive, where structural adhesives that enable lighter-weight vehicles are hot sellers, demand was solid. “We expect the automotive sector to remain a source of positive growth for this business and for the performance materials segment overall,” Liveris said. Finally, sales of new crop protection products from Dow increased 18% in the first half of the year, compared with 2013.

Dow rival DuPont did not have as successful a first half with its agriculture business. The company reported slow movement of its seed corn inventory in North America, as many farmers switched to planting more lucrative soybeans. Lower prices for refrigerants and fluoropolymers also contributed to an overall 2.1% decrease in sales compared with last year’s first half. Earnings fell 3.4% to $2.6 billion.

But two of DuPont’s growth segments took off during the second quarter; operating earnings spiked 72% in nutrition and health, compared with the year-ago quarter, and were up 37% in industrial biosciences.

One of several companies restructuring, DuPont is promising to sport a leaner, more productive look in the future. The company is in the process of spinning off its performance chemicals business. In addition, CEO Ellen J. Kullman wrote in a note to investors, “We also have launched the initial stage of a broad initiative to reset our operating model.”

Specialty chemical firm Ashland trimmed down just in time for its second-quarter earnings release. On July 31 it completed the sale of its water technologies business, for $1.8 billion, to private equity firm Clayton, Dubilier & Rice. Ashland also reported on a previously announced restructuring program expected to cut costs by $200 million and eliminate 800 jobs. The effort appears to be bearing fruit. Overall, the company raised earnings 10.2% to $249 million in the first half, despite sales that were off by a slight 0.8%.

Even with the divestiture and strong profit growth, Ashland management is still fending off prods from activist investor group Jana Partners to further focus itself. The firm’s Valvoline motor oil business and chain of oil-change service centers is a prime divestiture target, but in a second-quarter report Ashland CEO James J. O’Brien said the company would not sell the business “at this time.” The decision is supported “by a detailed analysis conducted by outside advisers,” according to the company.

Investors can expect that a similar detailed analysis will be conducted on Air Products & Chemicals’ businesses under new CEO Seifi Ghasemi. He was hired away from Rockwood Holdings by Air Products’ board after activist investor William A. Ackman took a 9.8% stake in the firm and asked for changes.

Air Products, an industrial gases firm, is less profitable than rival Praxair, a fact that weighs heavily on the new CEO. Its specialty chemical business, although profitable, sticks out like a sore thumb, and Ghasemi will either have to put it up for sale or justify keeping it.

Air Products’ profit margin declined a bit in the first half of the year. Sales increased 4.1%, and earnings edged up only 1.9% to $598 million, although second-quarter results were strong. In a conference call to discuss the results, Ghasemi gave analysts a taste of his management style. “We believe that cash is king,” he said in his opening remarks.

His aim is to focus on the per-share value of the stock, rather than sales growth or company size. For now, Ghasemi told analysts, the firm will work to optimize all its businesses and does not yet have plans to divest.

Not all restructurings involved getting skinnier; some firms are growing. Huntsman and Albemarle have effectively divvied up Rockwood, with Huntsman signing a deal last year to take its titanium dioxide business and Albemarle recently agreeing to buy the rest of the company.

Huntsman, which will likely close on the TiO2 deal next quarter, had a particularly strong first half; it raised earnings by 78.6% to $250 million. Demand for the white pigment was higher, particularly in Europe. And its polyurethanes business had a strong second quarter, fetching higher prices in the Americas and Europe.

North America and Europe were mentioned by executives from several firms as regions where demand was strong for various chemicals, a surprising development. Until recently, Europe had been blamed for dragging down the entire global economy, and North America was seen as a bit of a laggard. Developing economies were where the growth was expected to come from for years into the future.

The shift to developed-country growth is clear in figures released by the three chemical firms C&EN tracks that display sales by geographical region in their quarterly reports. At Eastman Chemical, growth was highest in Europe, followed by North America. In Latin America and Asia, sales decreased. The figures from Dow fit the same pattern. DuPont saw slight growth in Europe and flat or shrinking sales elsewhere.

It’s a small sample, but it may be representative. “Advanced economies and emerging markets are assuming unexpected roles,” a recent report by Moody’s Investors Service states, “with the former group leading the global recovery while the latter will weigh on world growth, at least temporarily.”

The report suggests that financial reforms and monetary policies from the recession have finally started to bear fruit in the U.S. and Europe. And pent-up consumer demand paired with an improving job market may be opening wallets in advanced economies.

In contrast, slowing growth in China and other emerging markets is likely a result of government actions to tamp down inflation and temper credit growth, Moody’s says. Economic growth in Brazil, once a leading market, will decelerate to 1.5–2.5% for 2014, according to new estimates.

Chemical firms based in the U.S. should continue to benefit from consistent, steady growth, according to the American Chemistry Council, the trade group representing large chemical firms. The ACC’s leading indicator, called the Chemical Activity Barometer, has increased in a steady march since the beginning of the year, hitting 97.0 in July, up 0.4%. Although the market for construction chemicals is lackluster, ACC says, businesses including pigments, electronic chemicals, and oil-field chemicals will continue to do well. 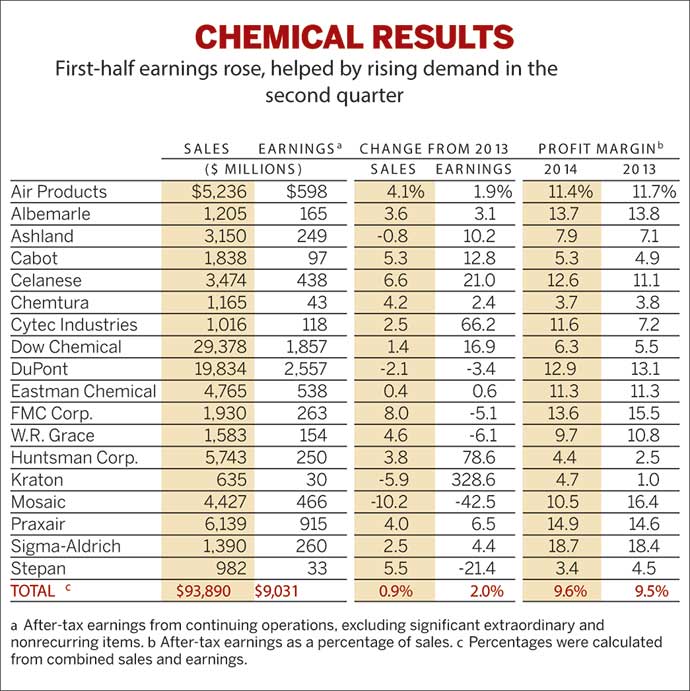