A research team has now combined numerous innovative materials to create a multilayered platform they say could provide the foundation for advanced applications, such as wearable adaptive camouflage. When light strikes sections of the team’s flexible device, those portions turn from black to white without any other external control or input (Proc. Natl. Acad. Sci. USA 2014, DOI: 10.1073/pnas.1410494111).

The synthetic camo is an array of roughly 1-mm2 pixels, each of which possesses a set of optical and electrical components designed to act like biological constituents in cephalopod skin. “We think of it as bioinspired engineering,” says John A. Rogers of the University of Illinois, Urbana-Champaign, one of the leaders of the study. “The overall design strategies and architectures are quite similar to what you see in biology, even though the detailed physics and materials are quite different.” 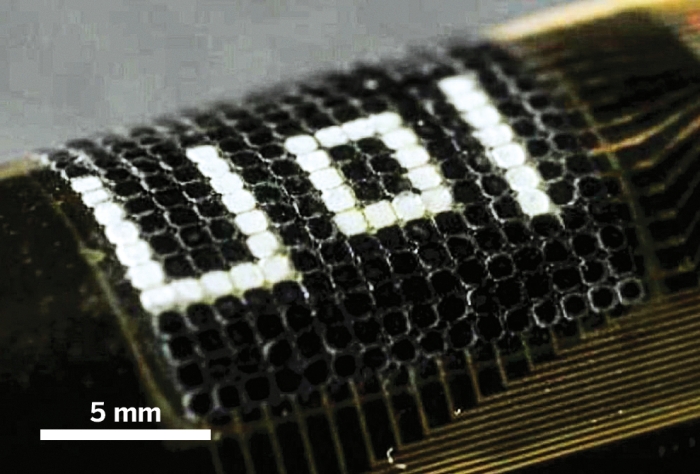 Credit: Proc. Natl. Acad. Sci. USA
Using a light-blocking mask, researchers coaxed their new artificial skin to spell out the initials of the University of Illinois.

For example, cephalopod researchers posit that the aquatic animals rely on skin proteins called opsins to help sense light. The Illinois team bestowed this functionality on its camouflage by putting multiplexed photodetectors in the device’s bottom layer.

When light hits the photodetectors, they pass electronic current upward to an ultrathin layer of silicon diodes. The electrical input heats the diodes, which in turn activate the artificial skin’s uppermost layer, where the color change occurs. Cephalopods use muscle fibers, rather than thermal energy, to help actuate their dynamic chromatic response.

The device’s upper layer consists of a polymer imbued with a thermochromic dye. At room temperature, the dye molecules form a black, opaque coating. But as they receive heat from the diodes, they become colorless and reveal an underlying layer of silver, which appears white.

Rogers acknowledges that the reversible black-to-white transition pales in comparison with the spectacular colors cephalopods display, but he says this device is primed to evolve.

George M. Whitesides of Harvard University, who was not involved in the study, agrees. “That this system is in black and white is not a limitation: It is a problem in engineering, not in concept, to make it multicolor,” he says, adding that the device is “very clever and original.”

Rogers says wearable adaptive camouflage is certainly one application for this system, but faculty from art, design, and architecture departments have also expressed interest in it for clothes, furniture, and building materials. “Camouflage helps you blend in, but this system could also be programmed to do the opposite,” he says.