If David Robert Grimes wasn’t born to rock, he was certainly honor-bound to do so at a young age. Grimes joined the British Scouts as an eight-year-old, which he admits was unusual for an Irish boy, but his scouting options were limited growing up in Saudi Arabia. In particular, he had misgivings about taking the scout pledge and swearing allegiance to the British monarch until his mother suggested a simple semantic work-around. Don’t make the pledge to the Queen, make it to rock group Queen instead.

So perhaps it shouldn’t be a surprise that, years later, the physicist who studies oxygen distribution in tumors at the University of Oxford devoted some of his free time to working out the mechanics behind wailing on an electric guitar. Grimes’s new study—aptly titled “String Theory”—tackles the science behind the techniques guitarists use as they riff, shred, and solo, including string bending (PLOS One 2014, DOI: 10.1371/journal.pone.0102088).

Grimes wanted to know exactly how this happened, so he derived a mathematical formula relating how a string’s pitch should change with bend angle according to physical principles. He checked the expression by driving two nails into the neck of his Gibson Epiphone guitar to hold strings at fixed bend angles while he measured their pitches.

“What surprised me was how well you’re able to quantify it,” says Grimes. He says it helps that he wasn’t trying to work out something more complicated, such as a woodwind or brass instrument that would require invoking the fluid dynamics of moving air. “Thank goodness I didn’t play the trombone.”

Since publishing the paper, Grimes has exchanged e-mails with H. David Politzer, a 2004 Nobel Laureate who studied banjo dynamics earlier this year, but so far, he hasn’t had any luck corresponding with fellow physicist, and Queen guitarist, Brian May.

Although May and his bandmates have little trouble filling arenas with adoring fans, the same cannot be said of the struggling Hanwha Eagles, a professional baseball team in Daejeon, South Korea. Currently in last place, the Eagles are not the champions, nor have they been since 1999. They have lost more than 400 games in the past five years, according to the BBC .

Stateside, fans of feckless franchises must choose from classic coping strategies, such as embracing delusion, donning paper bags, or rooting from the privacy of their own homes. The Eagles, however, have engineered an alternative for the 21st century: robofans.

The team installed a robotic cheering section in their home park, giving fans a new way to engage with the game. Fans who can’t or won’t make the trip to the stadium can upload their cheers and visages to robots over the Internet. The team also programmed the robots to interact with fans who are present. For example, they coax attendants into stadiumwide “slow waves” with their LED signs in the team’s YouTube video.

“We’re clearly behind in the technology,” says John Kuhn, senior director of new business management for the Fort Myers Miracle, a Minor League Baseball team in Florida. Kuhn has been devising ways to give fans a unique experience and fill seats for roughly 20 years. He’s been with teams that have sprinkled mannequins and celebrity cardboard cutouts throughout their bleachers, but never robots, he says; “I wish I would’ve thought of that.” 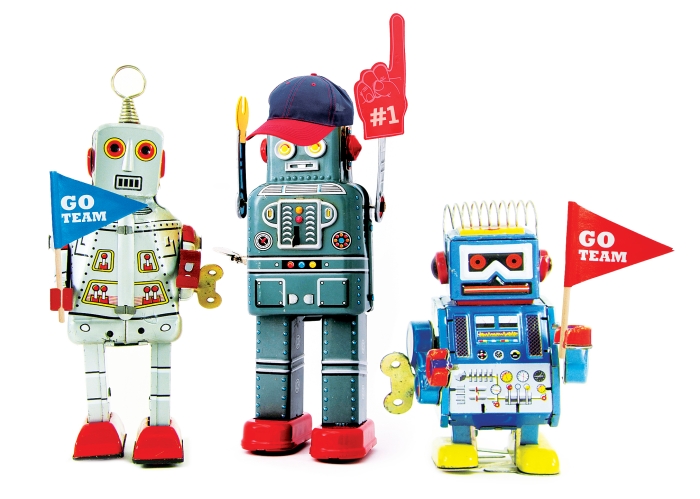 Science Communication
Hammer time on Science Twitter and drummers keeping cool while keeping time
Science Communication
Chemistry spelled out on vanity plates and Barbie gets a science makeover for kids’ meals
3-D Printing
Footwear feats
Share X
To send an e-mail to multiple recipients, separate e-mail addresses with a comma, semicolon, or both.
Title: Guitar Physics, RoboRooters
Author: Matt Davenport
Chemical & Engineering News will not share your email address with any other person or company.