Rethinking The Mole And Kilogram

WEIGHTY TASK
[+]Enlarge
Credit: Curt Suplee/NIST
A new watt balance at NIST will be operational in 2015. 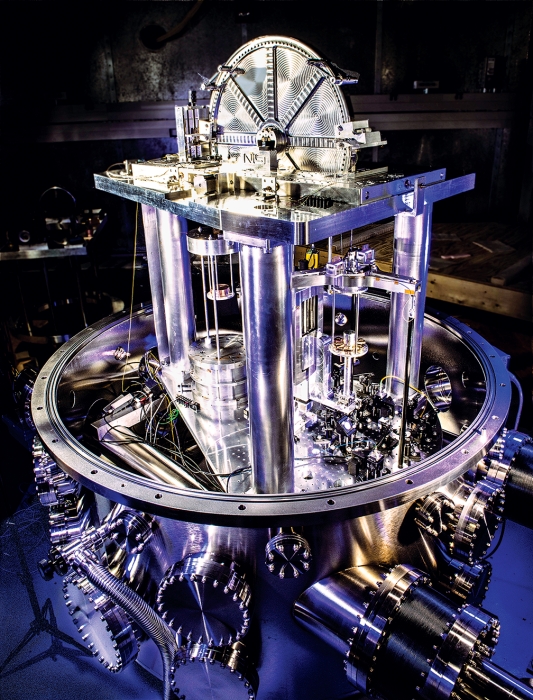 Credit: Curt Suplee/NIST
A new watt balance at NIST will be operational in 2015.

Relics in the form of rods, rulers, and weights go back thousands of years, suggesting that people have long cared about standardized measurements. Today, the International System of Units(SI) defines seven base units of measure: the meter, kilogram, second, ampere, kelvin, mole, and candela. But the system might be getting a makeover.

If international consensus can be reached, by 2018, the SI will instead set seven fundamental constants of nature. The base units will then be derived from those constants.

For example, the period taken up by a second will be calculated from a set frequency, 9,192,631,770 Hz, that describes the ground-state hyperfine splitting of the cesium-133 atom. And the length of a meter will come from defining the speed of light in vacuum to be exactly 299,792,458 m s–1.Other base units would be derived from the Planck (kilogram), Boltzmann (kelvin), and Avogadro (mole) constants; elementary charge (ampere); and the so-called luminous efficacy of specific monochromatic radiation (candela).

Among chemists, redefining the mole and kilogram with this new approach is causing much debate. The subject was the center of discussion during a symposium at the American Chemical Society national meeting in San Francisco earlier this month. The session was sponsored by the ACS Committee on Nomenclature, Terminology & Symbols.

The mole is currently defined as the amount of substance that contains as many specified entities as there are atoms in 0.012 kg of 12C. In the new SI, the Avogadro constant would be defined as exactly 6.022X × 1023 mol–1, where X represents additional digits to be set according to the best value available when the definition is adopted.

Some chemists dislike the fact that the proposed SI labels the Avogadro constant as the official way to measure “amount of substance.” The Avogadro constant and the mole are fine for talking about molecular reactions, but they don’t work across the board. “Auto exhaust emission is in grams per mile, and sulfur in gasoline is in parts per million per gallon,” noted Willie E. May, acting director of the National Institute of Standards & Technology (NIST).

The mole was the last of the base units added to the SI, and some scientists now propose eliminating it from the list of SI constants. Analytical chemists “think in terms of Avogadro’s number, a scaling factor to bridge the atomic to the macroscopic level,” said Paul De Bièvre, an independent metrology consultant. He and others suggested that it would be better to treat Avogadro’s number as a counting number, akin to a dozen or googol.

The kilogram, meanwhile, is the only remaining SI base unit defined in terms of a physical artifact: It is the mass of a plum-sized cylinder of platinum-iridium alloykept in a vault at the International Bureau of Weights & Measures, in France. Established as the official kilogram standard in 1889, the artifact’s mass has diverged over time from the masses of copies of the cylinder by about 50 µg.

Paul J. Karol, a professor emeritus of chemistry at Carnegie Mellon University, insists that using the watt balance to go in the reverse direction to define the kilogram from the Planck constant, is “an absolute mistake.” Besides the conceptual difficulty of connecting electrical current to the kilogram, Karol pointed out, the mass balance approach depends on the local gravitational field, which can vary depending on geographical location, tides, and other factors.

Karol and others would like to see the kilogram defined in terms of the mass of one atom of 12C, another unvarying property of nature. But with this approach, the Planck constant would continue to be derived from the kilogram, something physicists are against.

For most chemists, the proposed SI revisions will go unnoticed: Only the most extreme analytical measurements would be affected. Said NIST’s May, “Our aims are to make sure chemical and biological measurements made around the world are comparable over space and time.”

Analytical Chemistry
New definitions for the kilogram and mole
Materials
Boltzmann and Planck constants remeasured
Analytical Chemistry
Check Your IQ On The SI
Share X
To send an e-mail to multiple recipients, separate e-mail addresses with a comma, semicolon, or both.
Title: Rethinking The Mole And Kilogram
Author: Jyllian Kemsley
Chemical & Engineering News will not share your email address with any other person or company.