Petrochemicals: Companies in Europe and India ready plant conversions to use the cheap feedstock

The U.S. shale gas revolution is going global. At least five chemical companies in Europe and India plan revamps of their petrochemical crackers to run on low-cost ethane imported from the U.S.

India’s Reliance Industries is the latest firm to take the plunge. The company says it has executed agreements for the liquefaction and export of 1.5 million metric tons per year of ethane from North America to feed its Indian crackers. The company has also ordered six ethane carriers that it says will be the largest such vessels ever built. It expects the ships to be delivered toward the end of 2016, when the U.S. export terminal it has contracted with will be ready.

In Europe, Saudi Basic Industries Corp. just disclosed that it will upgrade its ethylene cracker in Teesside, England, to consume shale-gas-derived ethane. Earlier this month the Austrian firm Borealis disclosed upgrade plans for a cracker it operates in Stenungsund, Sweden. The petrochemical giant Ineos has begun a $600 million project to convert plants in Grange­mouth, Scotland, and Rafnes, Norway. And Versalis, part of the Italian oil company Eni, is studying a cracker conversion in Dunkirk, France.

All told, the facilities in Europe that are revamping to take U.S. ethane represent about 10% of the region’s ethylene capacity, according to Hetain Mistry, senior petrochemicals analyst at Platts, a business intelligence firm. But because the plants will likely not convert completely, Mistry estimates that only about 4–5% of the region’s output will be affected.

For the companies involved, the conversions are massive undertakings requiring multiple partners and construction projects. In Stenungsund, for example, Borealis is engaged in a multi-million-dollar upgrade of its cracker so it can run efficiently on the lightweight raw material. It has also hired TGE Gas Engineering to build a refrigerated storage tank at the site that will hold the imported ethane.

Borealis has contracted with the shipping company Navigator Holdings to deliver ethane to the ­Swedish facility. Navigator, in turn, recently hired China’s Jiangnan Shipyard to build a semirefrigerated tanker that will transport the ethane across the Atlantic. Navigator says the ship is one of four it has ordered in anticipation of large-scale ethane exports from the U.S.

The ethane for the Borealis cracker will come from Antero Resources, an oil and gas firm with operations in the Marcellus and Utica shale formations in Appalachia. Antero will transport ethane extracted from the region to a Sunoco terminal in Marcus Hook, Pa., for shipping to Sweden. The first delivery is planned for late 2016.

Infrastructure is also developing on the U.S. Gulf Coast to ship ethane overseas. On the Houston Ship Channel, Enterprise Products is building what it says will be the world’s largest ethane export terminal. Last month the firm announced that the facility signed up another customer, increasing commitments for its capacity to 85%. Although the terminal isn’t set to open until 2016, Enterprise says it is already studying an expansion.

For the European companies investing in conversions, the payoff should be sizable. Even after accounting for the cost of importing ethane from the U.S., Platts’s Mistry estimates that the firms will enjoy an improvement of roughly 20% in a measure of plant profitability called the variable margin.

But Matthew Thoelke, who follows the European chemical industry for the consulting firm IHS, cautions that conversions don’t make sense for most of the region’s companies, many of which are either inland or don’t have the flexibility to use ethane. Referring to shale gas, he says: “It’s not going to be the salvation of the European industry.” 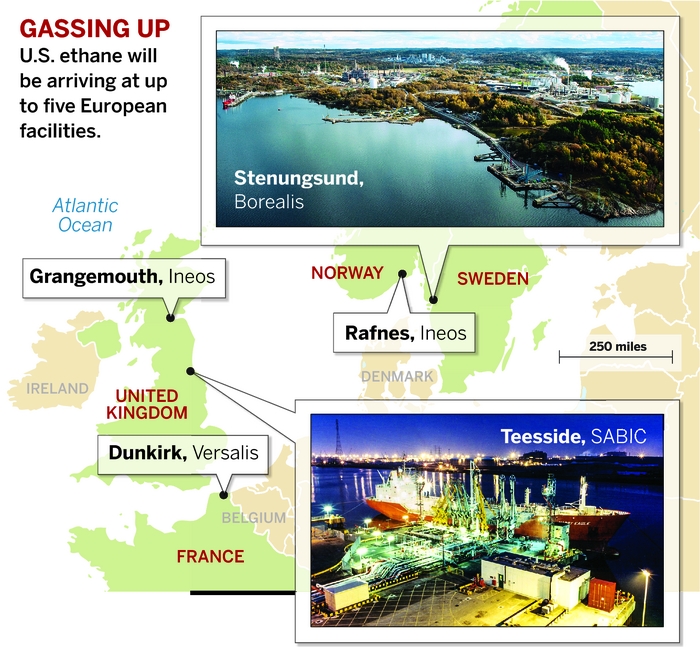