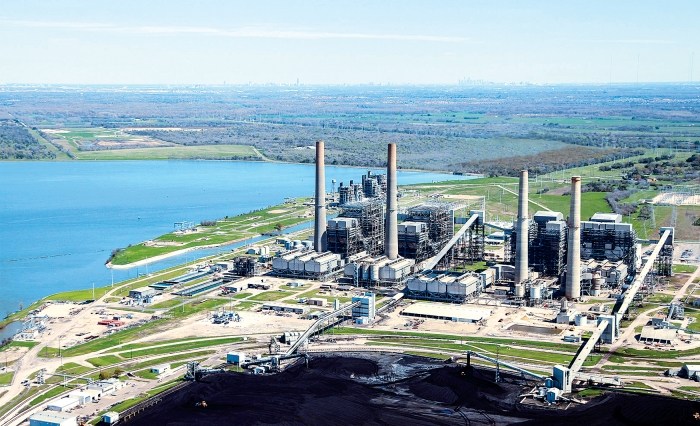 Credit: NRG Energy
Sale of oil recovered through underground injection of CO2 will fund a carbon capture project at this Texas power plant.

An international energy industry partnership and the Department of Energy plan to construct what will be the world’s largest carbon capture and sequestration (CCS) facility at an operating coal-fired power plant. If successful, the project would be a game changer. It would demonstrate a profitable way to retrofit commercial-scale coal-fired plants and allow them to continue burning coal while complying with expected future limits on new carbon dioxide emissions.

The Petra Nova project at an NRG Energy power plant near Houston is a 50-50 joint venture between NRG and JX Nippon Oil & Gas Exploration. The CCS system construction price is expected to hit $1 billion, with the firms contributing $300 million each and the ventureborrowing $250 million. DOE is providing $167 million for what Energy Secretary Ernest J. Moniz says is a first-of-a-kind project. When completed in 2016, it is intended to capture 1.6 million tons of CO2 annually from a 240-MW portion of NRG’s 610-MW W. A. Parish power plant.

The announcement of Petra Nova’s construction, which was made in July, coincided with the start of Environmental Protection Agency hearings on proposed regulations to reduce greenhouse gas emissions from fossil-fuel power plants. EPA’s proposal has angered the coal industry and its coal-state allies that claim the regulation will kill the U.S. coal industry. Debate over the proposed regulations is political fodder for the November congressional elections.

Petra Nova’s CO2 capture capacity is far higher than that of other CCS projects. Without regulations or a CO2 emissions cap to spur the evolution of technology, CCS projects have been stuck at the technology demonstration level, even in NRG’s case. In 2010, the company intended to build a small CCS pilot project for 60 MW of power at the Texas site but canceled plans when Congress’s efforts to put a price on CO2 through an emissions trading program died, NRG spokesman David Knox says. The company began searching for other justification to drive the project.

The power company joined with JX Nippon, an oil and natural gas exploration business, to purchase half ownership of a partially depleted oil field some 80 miles from the power plant, Knox says.

But CO2 captured from 60 MW of power would not recover sufficient oil to economically justify the CCS retrofit, Knox says. So they expanded the project to 240 MW.

“Building the facility to capture CO2 is not our business model,” Knox stresses. “The business model is a CO2 production and delivery system.” But sales of recovered oil will pay to cut CO2 emissions from burning coal, Knox says.

After capture, the plant’s CO2 will be compressed and piped to the oil field and driven underground to force more oil from the field. It is expected to boost oil-field production from 500 barrels per day to 15,000 daily. With oil at $100 per bbl, project construction costs could be paid off in a few years, Knox says. He would not comment on the operational costs.

The CCS system is separate from the power plant’s operations, he says. “The price of electricity, the amount generated, and the plant’s efficiency will not change.” Electricity and steam to run the capture, pressurization, and piping system will be supplied through a separate 75-MW natural-gas-fired power plant.

Petra Nova will use an amine-based solvent CO2 capture technology developed by Mitsubishi Heavy Industries and used at the James M. Barry plant, a pilot-scale coal-fired plant north of Mobile, Ala., owned by Southern Co. This capture technology is tried and true, says Howard Herzog, a senior research engineer at the MIT Energy Initiative. The Barry plant, however, captures only 150,000 metric tons of CO2 annually. NRG’s proposed unit is 10 times as large.

Knox says that because some 6 billion bbl of oil in the Gulf of Mexico could be recovered with enhanced oil recovery, NRG is considering using a similar approach at a half-dozen other power plants.

The plan to use captured CO2 to produce oil, a fossil fuel that when burned releases CO2 and contributes to global warming, has brought opposition. But because of enhanced oil recovery’s potential to fund CCS projects, it is backed by environmental groups including the Clean Air Task Force.

John Thompson, director of the task force’s Fossil Transition Project, applauds the project. “This is an international problem that calls for international solutions,” he says.