HOW TO MAKE A MACARON
Credit: Khanissaphat Srivajirasastrin
In this video, which the UC Davis team submitted to enter the C4 contest, a student discusses the scientific ins and outs of preparing the perfect green tea avocado macaron.

Anyone who’s a fan of Bravo’s “Top Chef” or the Food Network’s “Chopped” will tell you that making risotto during a high-stakes cook-off is a bad idea. The creamy rice dish, which requires careful attention and some serious stirring to get the texture just right, has drawn the ire of many a TV judge.

Undeterred, a team of students from California State University, Fresno, cooked the dish last month during a kitchen chemistry competition held at the American Chemical Society national meeting in San Francisco. The four-member group described how starches and sugars were critical to their grape risotto’s flavor and consistency before serving the concoction to about 50 spectators and a panel of three celebrity judges.

Although the students got major points for their creative presentation—they demonstrated sugar breakdown by busting open a “sucrose piñata” filled with hand-drawn glucose and fructose structures—the group didn’t manage to lift risotto’s cook-off curse. A team from the University of California, Davis, edged past Fresno State to take top prize at the Communicating Chemistry: California Cuisine (C4) contest. The winners made green tea avocado macarons, sandwichlike meringue confections with a creamy filling.

This isn’t the first time the C4 contest, affiliated with the Division of Agricultural & Food Chemistry, has been listed in the program at an ACS national meeting. The competition made its debut during the spring 2013 conference in New Orleans, where C4 stood for “Communicating Chemistry: Cajun Cooking,” and student teams presented dishes such as crawfish étouffée and pecan pie. 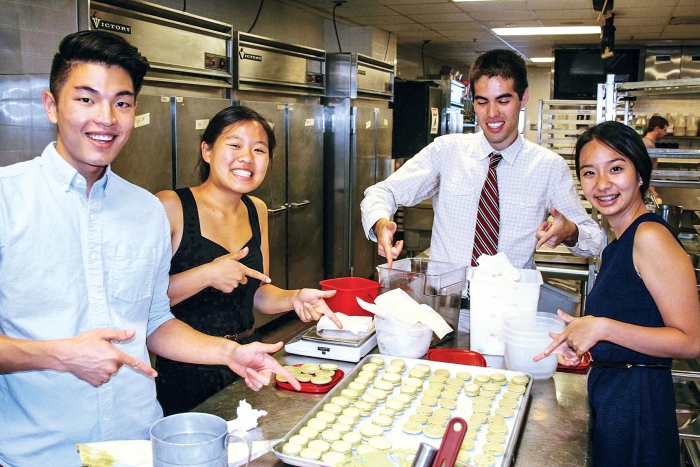 “Our goal is to glorify the chemistry of food,” said Justin Miller, one of the contest’s organizers. “We want students to see why communicating food science is important—to enjoy it, to revel in it.”

The idea for C4 sprung from a 2011 episode of “Top Chef Masters,” in which contestants chose a scientific concept, such as the Maillard reaction, and then prepared a food, such as steak, to showcase the concept. The master chefs later set up booths and served samples to attendees at a science fair.

After watching the episode, Miller’s wife, Julianne, encouraged him to incorporate an edible science fair into the advanced food chemistry course he teaches at Hobart & William Smith Colleges, in upstate New York. Miller gave it a try, inviting friends, local schoolteachers, and others in the community to quiz his students and have some snacks.

One friend who attended Miller’s fair was Gavin L. Sacks, a food scientist at nearby Cornell University. Noting the event’s success, Sacks approached Miller about taking an edible science fair national, and C4 was born.

To enter C4, teams of undergraduate and graduate students must submit a written report and a three-minute video explaining a food science concept. “They don’t have to describe exactly what they would present at the ACS meeting,” Miller told C&EN. “The video is just meant to show us a snippet of what they’re capable of doing.” 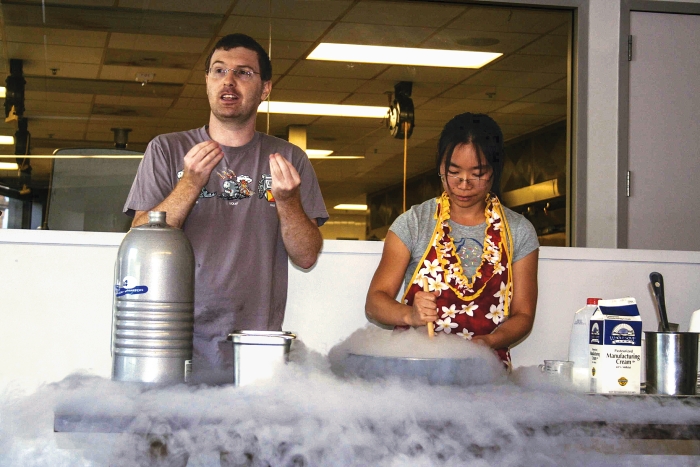 From these submissions, Miller and Sacks choose three finalists to compete at the conference. There, the teams give a 10-minute presentation about the chemistry behind their dishes—which must feature local cuisine—and afterward offer bites at an interactive science fair booth.

During C4’s first year, Sacks applied for an ACS Innovative Projects Grant to help fund the contest. Some of the money he received went toward registering the student finalists and bringing them to New Orleans. This year, the organizers, who included Donnie Golden of Fresno State, operated on more of a shoestring budget, but they hope to attract a sponsor and continue C4 in the future. 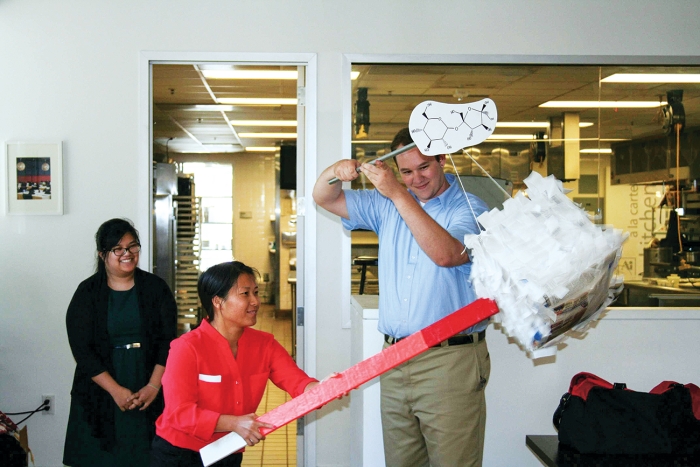 In San Francisco, one of the reasons the team from UC Davis beat Fresno State and a duo from Stanford University who made liquid nitrogen ice cream was because “they picked one of the hardest recipes,” said Mark Davis, a C4 judge this year. “Even professionals struggle at making macarons,” added Davis, a chef and academic director at the Art Institute of California, where the contest was held.

Although it’s nice if a team’s dish tastes good, Miller added, it’s more vital that the students know their science and present it articulately.

Guy A. Crosby, C4 judge and science editor for PBS’s “America’s Test Kitchen,” especially appreciated the UC Davis team’s explanations. Even more important, he said, “they didn’t try to snowball us if they couldn’t answer a question.”

For instance, the winners, who took home embroidered professional chef hats, prepared two types of macarons: one in which they used confectioner’s sugar to make the meringue sandwich shells, and one in which they used granulated sugar. The latter came out crispy, and the former were chewy. The students admitted to judge Harold McGee, author of “On Food and Cooking: The Science and Lore of the Kitchen,” that they weren’t sure of the reason behind the phenomenon.

McGee suggested that the difference in texture might arise from the fact that confectioner’s sugar contains up to 3% cornstarch and would therefore absorb water differently than granulated sugar. The students settled on a 60:40 ratio of confectioner’s to granulated sugar to make their final macarons both chewy and crisp.

“The time is ripe for these types of competitions,” Miller said. Shows like “Top Chef” are still quite popular, he added, and if they help educators get students excited about science, it’s a good thing.

McGee agreed, saying of the current kitchen chemistry movement: “Frankly, it’s something that should’ve happened a long time ago.”

Comments
Monica Carrillo (November 25, 2014 1:08 PM)
This kind of events are excellents to awake and feed scientific curiosity. Chemistry is everywhere, and the use of cooking as a learning tool give very good results.
Is it possible to make this kind of competitions in Mexico, having your support??
Thanks in advance.
Reply »