Buckets Of Money For ALS Research 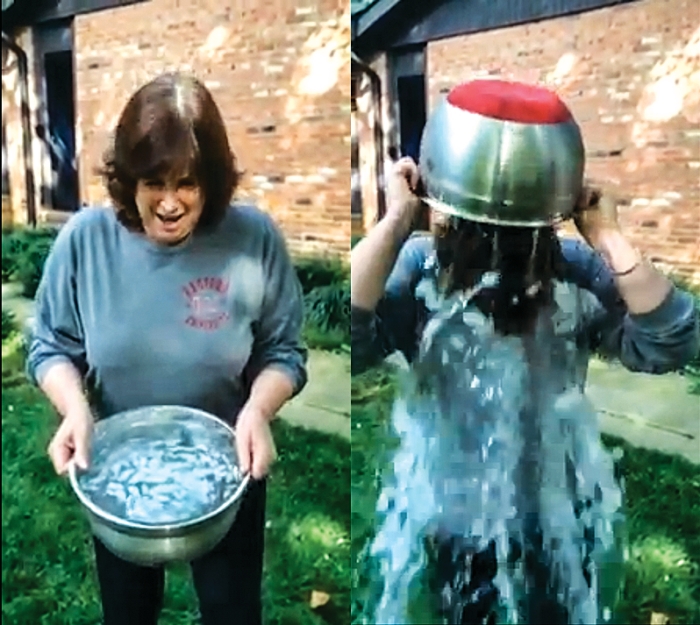 We’ve all seen the videos. Someone stands in a backyard, declares that they’ve accepted a friend’s ice bucket challenge, and then gives three more people 24 hours to take the plunge. Next comes the struggle to hoist a bucket of ice water overhead. The scene ends with a shriek and a shiver.

The point of the ice bucket challenge, which went viral in July and peaked in August, is to raise awareness for amyotrophic lateral sclerosis, a neurodegenerative disease that strikes about 5,600 Americans a year. If you’re given the challenge and don’t do the ice dump, you’re supposed to donate $100 to an ALS organization. As the phenomenon gained steam, many folks chose to both take the ice bath and make a donation. Overall, more than $100 million has been raised for ALS-focused nonprofits.

But the runaway success of the campaign has elicited gripes. Some people argue that the message is buried by the stunt, while others say folks shouldn’t be coerced into giving to charity. Still others worry the uptick in donations to ALS organizations will siphon funds from other charities, particularly from ones for diseases that impact more people.

To someone who has covered rare disease research for more than a decade, these criticisms seem like sour grapes. Every disease could benefit from more research, so arguing over which one deserves more is unproductive. And the ice bucket challenge has brought awareness and much-needed cash to a disease that devastates, lacks treatments, and has attracted little attention from the drug industry.

Instead, the focus should be on spending the cash wisely. Rather than gripe about fairness, critics should watch to ensure that ALS nonprofits make the most out of the windfall.

The ice bucket challenge has “changed the ALS landscape forever,” says Steve Perrin, chief executive of ALS Therapy Development Institute (ALS TDI), a nonprofit biotech firm. “ALS has always been an orphan disease, and now it’s become a household name that everybody has an affinity to because everybody did the challenge.”

Indeed, the ALS Association (ALSA), the primary beneficiary of the campaign, has seen more than 2.1 million new donors since the ice bucket challenge began. Those donors might not have known anything about ALS before taking a public ice bath.

And then there’s the money. Since July 29, ALSA has netted more than $100 million, compared with just $2.8 million in donations during the same period last year. ALS TDI, meanwhile, has pulled in more than $3 million, and Project ALS has collected about $500,000. To put those figure in perspective, the National Institutes of Health estimates it will spend $40 million on ALS in 2014.

The new funds might not forever alter the ALS research landscape, and they don’t guarantee a new drug will make it to market, but they do have the potential to have an impact on ALS R&D.

“It’s a huge amount of money and a tremendous opportunity,” says Lucie Bruijn, ALSA’s chief scientist. Although ALSA has not provided specifics about how it will spend the money, Bruijn says the nonprofit has identified research projects it can move quickly on, including several developed with the hope that funding would emerge. The idea isn’t to put small amounts of money across multiple programs, she adds, but “to really commit to a direction that will push treatments into the clinic.”

Although ALS TDI’s haul from the ice bucket challenge is more modest, it’s still enough to make an impact. The nonprofit has identified two programs that will immediately move forward. About $1.5 million will be used to start human tests on a drug candidate—the nonprofit declines to identify it because its biotech partner is still reviewing the plan—that showed promise in animal studies.

Another $1 million will be spent on expanding a precision medicine program aimed at stratifying ALS patients according to how their disease progresses and how they might respond to various treatments. “If we have 12 patients in my office, all newly diagnosed, I can’t tell if they’ll succumb to this in nine months or nine years,” Perrin says.

For each participant, ALS TDI will sequence the whole genome, create an induced pluripotent stem cell line from a skin biopsy, and look for biomarkers from blood samples. Before the ice bucket challenge money, ALS TDI planned to enroll 20 people in the program by the end of the year—not enough to really draw conclusions, Perrin says. Now, it plans to enroll 300 people, which is enough to allow scientists to actually see patterns in the data, he says. The first patient is slated to start the study this week.

As the ALS nonprofits decide how to maximize the ice bucket challenge money, they are also quick to note that the overall cost of bringing a drug to market can reach $1 billion. “It’s easy to spend that money fast,” Bruijn says. “Small clinical trials can cost up to $25 million. A few studies can quickly absorb those funds, and we need to be strategic.”

The ice bucket hype will surely fade. After the world has moved on to the next meme, let’s remember to keep an eye on just how strategically that $100 million is spent.