A popular management strategy for delivering bad news is to sandwich the unsavory information between tidbits of good news. Daniel Daly, who chairs the ACS Division of Business Development & Management, doesn’t subscribe to this theory, at least when it comes to discussing the status of the U.S. manufacturing sector.

Although Daly, director of the University of Alabama Innovation & Mentoring of Entrepreneurs center, didn’t soften the blow with a sunnier fact, he is still optimistic for the future of manufacturing in the U.S.

He believes that the technologies for creating custom three-dimensional parts, called 3-D printing or additive manufacturing, can help the U.S. reclaim lost jobs and create new opportunities. But engineers and scientists must first convince American industries that 3-D printing, known for generating prototypes and trinkets, can produce reliable, valuable, and functional parts.

Some companies and organizations are already demonstrating this capability. GE Aviation, for instance, recently announced it will use 3-D printed parts in some of its jet engines starting in 2016. Still, Daly believes that for additive manufacturing to become truly disruptive, innovative tools and materials will have to permeate to smaller businesses, where the players don’t have access to General Electric-level R&D capital.

In a recent report, about two-thirds of surveyed manufacturers said they were adopting 3-D printing technologies, but only about 10% were using the techniques to go beyond prototyping and to manufacture final products. More than 100 manufacturers participated in the survey, which was published by the professional services network PricewaterhouseCoopers.

That’s why Daly and Rigoberto C. Advincula, chair-elect of the ACS Division of Polymer Chemistry, organized a symposium in San Francisco on additive manufacturing and advanced polymer materials. “This session is really an effort to make the broader community aware of industry’s need for new materials and innovation,” said Advincula, a professor of polymer science at Case Western Reserve University. He told C&EN that this may be the first additive manufacturing session held at an ACS national meeting and that it is certainly the first to be cohosted by the polymer and business divisions.

“We’re sort of issuing a challenge,” Daly said. “We’re saying, ‘Don’t sit there and fret about these jobs going offshore. Let’s come up with these new polymers.’ ”

Additive manufacturing refers to techniques that build 3-D objects one layer at a time. Current commercial 3-D printers can selectively extrude thermoplastics; cure photosensitive resins; and sinter metallic, ceramic, or polymer powders to produce virtually any object that can be drawn with a computer-aided design program.

Although metals and ceramics are attractive for industrial applications, Freedonia Group, a business research firm, projects that plastics will remain the most-printed materials over the next several years. Polymers are easy to work with, and the machines that can print them are simple and affordable. But part of the problem behind innovating printable plastics is the printers themselves, said Jennifer A. Lewis of Harvard University.

“There’s a real challenge in formulating materials that can be used in commercial printers,” said Lewis, who has been developing new methods and materials for additive manufacturing for about 10 years. “If you want to use an existing method, you’re confined to a limited set of materials.”

Extrusion printers force thermoplastics through a heated aperture, similar to a hot glue gun, to build up 3-D structures. The melting temperature and liquid-phase viscosity of a polymer must therefore fall within a limited range to be printable.

Stereolithography, a form of 3-D printing that’s been around for nearly three decades, hardens photosensitive resins layer by layer with patterned light. This technique isn’t compatible with composites that contain light-scattering particle fillers, however.

Such composites are of particular interest to Lewis. Her group recently demonstrated that the mechanical properties of printed epoxies can be tailored when the feedstock is filled with microscopic carbon fibers (Adv. Mater. 2014, DOI: 10.1002/adma.201401804). The researchers have also printed 3-D circuits from conductive oil emulsions of carbon microparticles. By printing these inside an elastomer, the team constructed flexible electronics for wearable sensors (Adv. Mater. 2014, DOI: 10.1002/adma.201400334). 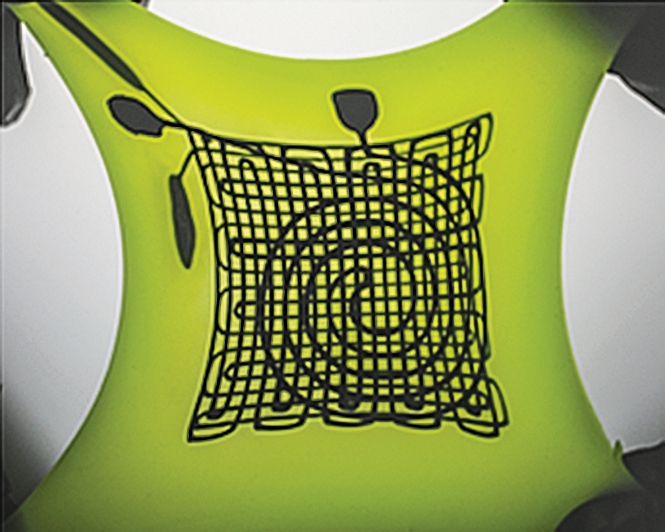 Lewis said the techniques used in these projects could easily be extended to other composite materials because of her group’s flexible 3-D printing platform. The printhead is simple. It’s a no-frills nozzle—sometimes just a fine-tipped plastic syringe—which puts the onus of complexity on the materials. The group may have to cure their parts with postprocessing steps after the printing is complete, but she said there are virtually no restrictions on the materials up-front.

“We’ve turned printing on its head,” Lewis said. “That opens up a lot of material innovation space.” She believes a materials-centric approach to 3-D printing will pave the way to its broader adoption in industry in the next five to 10 years.

“We’re in the infancy of making finished, functional products,” she said. “That’s where the growth is. If that happens, it’ll be a huge win for the materials and chemical communities.”

At the additive manufacturing session in San Francisco, the speakers were of a similar mind that, to entice U.S. manufacturers into adopting 3-D printing, scientists would need to develop designer materials. Fortunately, they had a few ideas on how to get there.

John Texter of Eastern Michigan University presented his nanofluid inks as a versatile class of materials that could introduce functional flexibility to 3-D printed products.

These inks, first developed by researchers at Cornell University, are viscous liquids made entirely of surface-functionalized nanoparticles: They contain no solvent. Surface groups are linked to a core nanoparticle, thereby offering two direct levels of materials tuning. The core can bestow certain optical, magnetic, or electronic properties, and an ink’s surface coating controls its chemical reactivity.

Metals, magnetic nanoparticles, and semiconductors are among the materials historically used as cores. Texter’s team introduced reactive surface groups such as ureas, acrylates, and urethanes that control the strength of the cured ink.

Texter even gave the audience in San Francisco a glimpse of polysiloxane supramolecules that he’s dubbed “core-free nanofluids,” which are tumbleweed-like structures that lack a rigid core and could further expand the materials palette of polymer researchers.

Whatever is at the core of Texter’s nanofluid inks, he and his team have found ways to incorporate reactive moieties on the surface groups so that the particles can cross-link with each other or a substrate when they’re exposed to the right stimulus, such as humidity or ultraviolet light. The inks dry with predetermined color and clarity, and Texter’s group is now investigating core and coating combos that would yield materials with improved mechanical toughness.

THE WRITE STUFF
[+]Enlarge
Credit: Angew. Chem. Int. Ed.
Nanofluid inks such as this one can be deposited using direct-write technologies, such as ink-jet printers. 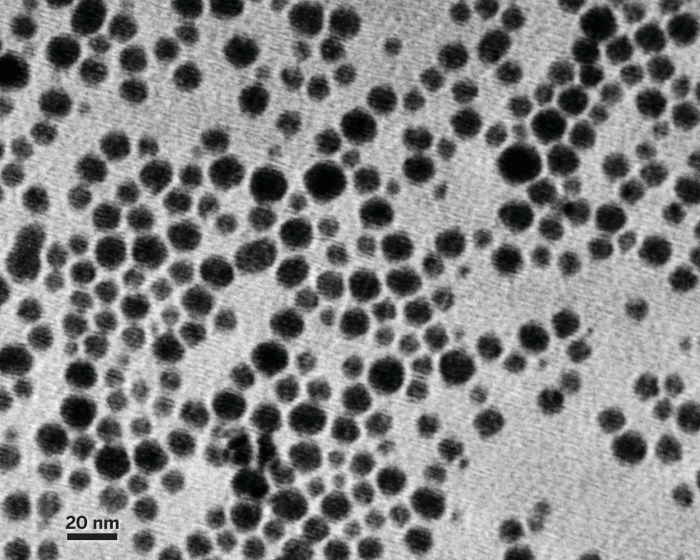 Credit: Angew. Chem. Int. Ed.
Nanofluid inks such as this one can be deposited using direct-write technologies, such as ink-jet printers.

“We didn’t get into this thinking about additive manufacturing, but you can print the inks on demand,” Texter said. In theory, different inks could be printed upon each other, one layer at a time, giving manufacturers fine control over their final product’s properties. “You’d start at the bottom and do the chemistry as you work up.”

About 50 miles east of San Francisco, at Lawrence Livermore National Laboratory, researchers are also developing new materials and techniques for additive manufacturing. Christopher M. Spadaccini, an engineer at LLNL, said that the lab’s work isn’t directly tied to the commercialization of 3-D printing, but it can still offer unique and valuable insights.

“The areas where you will see inroads for additive manufacturing in industry are where there’s a need for high-complexity, high-value, low-volume components,” he said, which includes sectors such as aerospace, automotive, and medical devices, including dental implants and prosthetics. At LLNL, a national lab with responsibilities ranging from developing large-scale biosensors to helping maintain the U.S. nuclear stockpile, “we’re very familiar with high-value, low-volume products for many national security applications,” Spadaccini said.

LLNL is also home to one of the few supercomputers that’s capable of simulating 3-D printing methods and materials from the nanoscale to the macroscale. “Controlling materials at that scale is going to be essential, but industry isn’t really taking that up yet,” Spadaccini said. “We really hope to understand the materials and processes” with simulations.

The University of Alabama’s Daly believes industry will adopt the charge once it’s shown how. And new materials and methods will become commercially viable. The “when” is murky, Daly said, but the sooner researchers can coordinate their efforts, the better.

“The ramification that will have on the chemistry community is huge,” he said. “We’ll distribute the ability to manufacture; that’s the paradigm shift.”