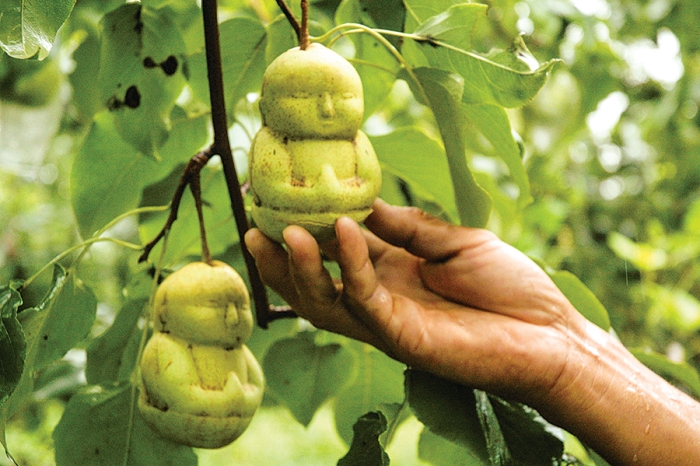 Buddhism teaches its followers that the cause of suffering is desire. Yet, it’s tough not to crave some fruit when there are Buddha-shaped pears in the world.

The unique produce is the creation of Fruit Mould, a Chinese manufacturer of eclectically shaped polycarbonate molds. The molds are easy to use. Simply place them around infant crops, give the plants time to form to the molds’ contours, and before you know it you’ll be harvesting baby-shaped apples, heart-shaped watermelons, and star-shaped cucumbers.

According to the company, the molds are more than just a fun way to eat a healthy diet. They’re also a valuable business asset. “Investing in fruit and vegetable molds will truly open up a lot of opportunities,” says Fruit Mould’s website, citing the fact that differentiated produce commands “higher market value.”

Mollie Woods, an agricultural economist at Michigan State University, believes Fruit Mould’s claim, particularly as it relates to the markets in Asia. “Consumers there are much more likely to buy fruit for gift giving and are willing to pay a premium for the fruit,” she tells Newscripts. “Fruit consumption in these markets is high and growing.”

To capitalize on this popularity, Fruit Mould offers worldwide shipping. U.S. consumers interested in sinking their teeth into their own ripe Buddha can shell out $3.00 for a mold—plus $30 for delivery costs.

Fruit Mould may understand the shipping needs of its customers, but a computer system in Bangladesh understands the moods of its users. The empathic computer, designed by researchers at the Islamic University of Technology (IUT), in Gazipur, recognizes human emotions with up to 87% accuracy.

Computers have made tremendous advances over the years, “but in the case of interactions with end users, a lot more should be done,” the IUT researchers write in a recent issue of Behaviour & Information Technology (2014, DOI: 10.1080/0144929x.2014.907343). To build a system capable of improving such interactions, the researchers asked volunteers to identify their emotional states when typing on a computer. From this, researchers were able to associate keystroke attributes, such as typing speed, with particular emotions. The research team then combined keystroke attribution data with a previously created database that associates particular words and sentences with the emotions of joy, fear, anger, sadness, disgust, shame, and guilt. This combination led to the creation of software capable of identifying what a user is feeling on the basis of that user’s keystroke dynamics and the content of his or her typing.

The research team hopes that its findings will lead to the development of word processing, user authentication, and online teaching systems that are better able to adapt to users’ needs. In a world of customizable fruits and vegetables, such efforts to create a more personalized computing experience are certainly appreciated.