[+]Enlarge
Credit: Courtesy of Samantha Arnett
After a training session for veterinarians in southern Afghanistan, Arnett visits with goats. 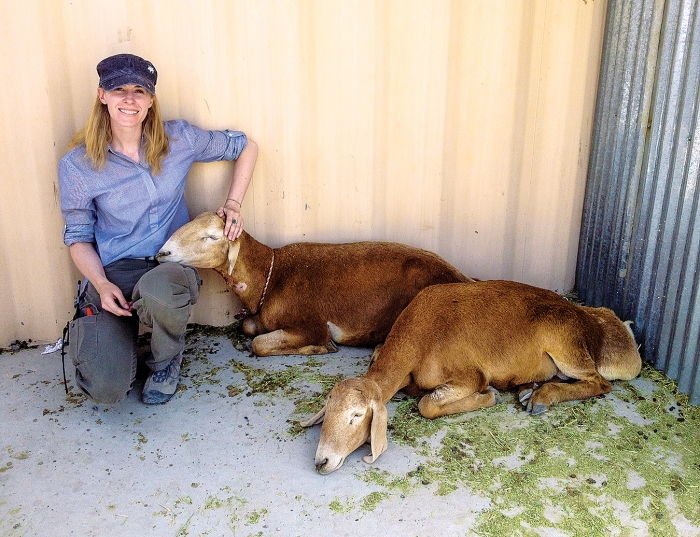 Credit: Courtesy of Samantha Arnett
After a training session for veterinarians in southern Afghanistan, Arnett visits with goats.

Infectious pathogens take an enormous toll on public health worldwide—and in the wrong hands, they can also become weapons. Samantha Arnett’s job is to reduce that threat.

Arnett, a Ph.D. chemist, works in a part of the U.S. State Department that aims to keep terrorist organizations or unstable governments from making or acquiring weapons of mass destruction. She is acting deputy team chief and program officer for Iraq and South Asia in the department’s Biosecurity Engagement Program (BEP).

Arnett directs international strategies to prevent terrorists from exploiting dangerous pathogens such as anthrax. This involves securing so-called dual-use technologies—facilities and equipment that have legitimate industrial applications but could be used to turn pathogens into weapons. She and her colleagues also support research and public health efforts to detect and control infectious disease, such as monitoring outbreaks.

She regularly travels all over the world, most often to Afghanistan but also to Albania, Indonesia, and the Philippines, among other countries. In each, she develops strategies in collaboration with a variety of partners including government officials, laboratory scientists, field technicians, animal and public health officials, and law enforcement personnel. Together they have implemented safe and secure practices for the handling of biological agents in labs. They’ve also provided training to lab workers in molecular diagnostics and taught law enforcement agents how to spot weapons of mass destruction. And they’ve sharpened the clinical skills of veterinarians. For example, in Afghanistan, where anthrax and foot-and-mouth disease are endemic, BEP has helped train veterinarians to identify and control these diseases in ruminants.

No two days are alike for Arnett. “I remember one particularly polarized week last year that took me from a business suit in D.C. to ballistic body armor and a headscarf in Afghanistan,” she says. “I left D.C. on a Friday evening after working all day to fix a budget issue and draft briefing material” for senior officials. She arrived in the southern province of Kandahar, Afghanistan, on Tuesday afternoon.

Arnett, 34, completed her Ph.D. in bioinorganic chemistry in 2008 at Johns Hopkins University in Craig A. Townsend’s lab and then worked on HIV vaccine development as a postdoc at Scripps Research Institute with Dennis R. Burton. She says she is surprised when people ask her if she misses science because it is a big part of her job. “My background in molecular biology, microbiology, and vaccine design put me in a unique position to help reduce the risk that dual-use technology and expertise is exploited for nefarious purposes,” she says. With her lab expertise, she has also built trust with scientific partners internationally. She gained the respect of a lab director in South Asia, for example, by fixing a polymerase chain reaction machine that had been broken for several years.

Arnett also draws on her scientific training daily to solve problems in some of the most challenging countries in the world. “My ability to analyze any situation and identify a number of possible approaches, explanations, or solutions is a direct result of my scientific training,” she says.

She didn’t set out to pursue a career in government. “The underlying driver behind my journey has been the need to pursue a profession that helps people,” Arnett says. As a postdoc, she began exploring career opportunities outside of academia and attended an American Association for the Advancement of Science conference. There, she met a scientist who inspired her to apply for the association’s Science & Technology Policy Fellowships, which place Ph.D. scientists in various government agencies for up to two years.

“My now-colleague described this amazing job at the Department of State where he applied his biological expertise to national security issues through the development of cooperative programs with partner countries around the world. Sold!” she says.

She recommends the experience highly, calling it a “welcomed dramatic change from the lab. I learned a whole new style of briefing, writing, and managing my time.” After finishing her fellowship in 2013, she oversaw BEP in Southeast Asia before taking on her current roles.

Arnett says she has found her niche in the national security sector and encourages other scientists to consider a career in government. Many government agencies want to hire scientists, she says. “We are sought after for the way we think, our stepwise approach to problem solving, and our ability to synthesize large amounts of information quickly.”