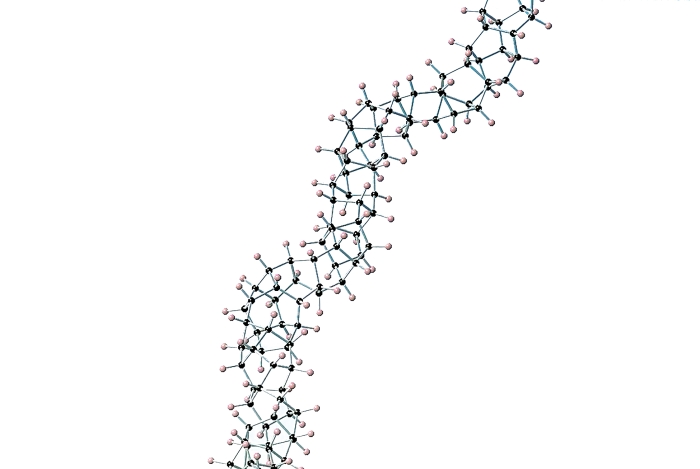 Using a high-pressure device at Oak Ridge National Laboratory, graduate student Thomas C. Fitzgibbons recently transformed a few cubic millimeters of liquid benzene into a white, crystalline powder. The solid was made of a substance never before observed: ultrathin threads of carbon atoms bound to one another in a pattern resembling diamond (Nat. Mater. 2014, DOI: 10.1038/nmat4088).

The threads, Fitzgibbons and colleagues hope, might one day be used to make strong, lightweight materials for vehicles and other objects.

Creating ordered nanomaterials from organic molecules such as benzene has been a longtime goal of the group, says John V. Badding, who is Fitzgibbons’s Ph.D. adviser at Pennsylvania State University. In the past, when Badding and his team put the squeeze on benzene, they produced only disordered substances, though. This time, crystalline order seems to have arisen because “the apparatus Tom used required us to compress and decompress slowly,” Badding explains.

Fitzgibbons ramped up to a pressure 200,000 times that of Earth’s atmosphere and back down over 20 hours. This glacial pace, the team proposes, allowed stacks of benzenes to poly­merize slowly enough to form the 6-Å-thick ordered threads (structure shown).

“This is pioneering work,” says Roald Hoffmann, a theoretical chemist at Cornell University. Hoffmann, who collaborates with Badding, predicted a structure related to that of the nanothreads while studying benzene polymerization a few years ago.

Ionic Liquids
Chemistry in Pictures: Papa’s got a brand new solvent
Materials
Fluorescent materials are the brightest ever made
Biomaterials
Fruit’s metallic blue caused by lipid nanostructures
Share X
To send an e-mail to multiple recipients, separate e-mail addresses with a comma, semicolon, or both.
Title: Diamond-like Nanothreads Form Under Extreme Pressure
Author: Lauren K. Wolf
Chemical & Engineering News will not share your email address with any other person or company.

Comments
Pamela B Kamga (October 2, 2014 8:12 AM)
Great! this could be the future of cheaper but more protective cars and vehicles. Pamela
Reply »

laurenkwolf (October 5, 2014 5:19 PM)
Hi Pamela, thanks for writing in! I agree that this could definitely have an impact on transportation. The next challenge for these folks (aside from better understanding how the threads form) is to figure out how to make more of the material.
Reply »