All Eyes On Chemical Education

Last month, approximately 1,600 chemical educators gathered on the campus of Grand Valley State University, in Allendale, Mich., for the 23rd Biennial Conference on Chemical Education (BCCE). The four-day conference, which was sponsored by the American Chemical Society’s Division of Chemical Education, featured symposia and workshops on various aspects of chemical education. Here are some of the highlights. 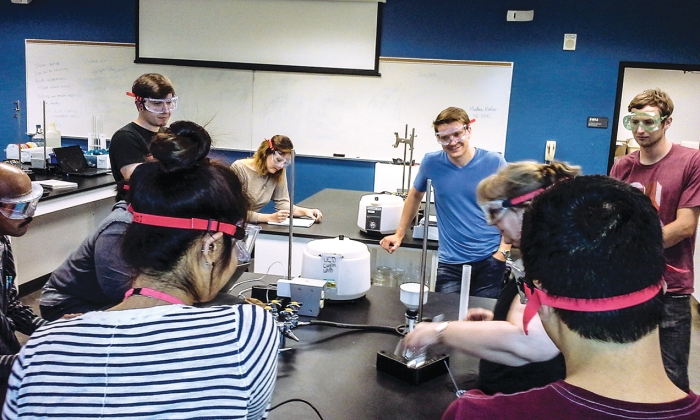 Undergraduate enrollment in the chemistry department at the University of Colorado (CU), Denver, has more than doubled in the past decade. That surge is a result of increasing overall enrollment of students at the university, many of whom are premed or training for other health-related careers. That rapid growth placed the small master’s-granting department in a bind. With few graduate students, who would teach the extra lab sections?

As is increasingly the case in such situations, the department turned to some of its seasoned undergraduates. To prepare those students and incoming graduate students for their new roles as teachers, the department developed a “boot camp” for its teaching assistants (TAs) in 2012, said Vanessa Fishback, one of the two chemistry faculty members who oversee the program.

The weeklong boot camp is run by Priscilla Burrow, who oversees the general chemistry portion, and Fishback, who oversees the organic chemistry portion. It is held immediately before the fall semester starts. The boot camp familiarizes the novice TAs with department protocols and the labs they’ll be teaching. It gives them a chance to practice their presentation skills. It helps establish uniformity in grading among TAs and lab sections. Most important, it helps forge a collaborative team among the TAs, the laboratory staff, and the supervising faculty.

Undergraduate TAs are recruited at the end of their sophomore year. They can teach up to two lab sections, but those new to teaching are limited to one section in their first semester so they have a chance to familiarize themselves with their new role. Nearly 10% of the nearly 300 CU Denver chemistry undergrads who complete organic chemistry each year are now cycling back into teaching, Fishback said. This fall they have 17 organic TAs, all of whom are undergrads, and 14 general chemistry TAs, eight of whom are undergrads.

The hardest part of online science courses is giving students a good laboratory experience. Safety concerns and equipment costs limit what students can do with kits in their own homes. But wet laboratories that students control over the Internet could give students the opportunity to carry out real experiments with real equipment, from a distance. The North American Network of Science Labs Online (NANSLO) is giving students at its member institutions the chance to do just that.

Participating professors can choose from a menu of biology, chemistry, and physics experiments, Branan said. The menu currently includes chemistry-related activities designed to teach students about enzyme kinetics, the Beer-Lambert law, the charge-to-mass ratio of an electron, emission spectroscopy, and gas chromatography.

For example, for a Beer-Lambert law experiment, students determine the light absorbance of standard and unknown substances using robot-controlled syringe pumps and spectrometers. “In the past, we premade the standards, but making the standards is an important part of the puzzle,” Branan said. “By integrating some syringe pumps, one with distilled water and one with stock solution, the students can make those standards.”

Students will soon be able to do titrations, too. One reservoir has an unknown acetic acid solution that they can add to a beaker and titrate with standardized sodium hydroxide using other pumps. But robotic control doesn’t guarantee perfect titrations. “They can add either a drop of titrant or a predefined amount,” he noted. “They can overshoot it for sure.” The setup helps students working remotely get a feel for what a titration really means, Branan said.

Students sign up to use the equipment at available times that fit their schedule, Monday through Saturday, 4 PM to midnight. The Colorado lab can handle 30 students simultaneously, with five students working at each of six stations, Branan said. “Right now, we’re serving hundreds of students a semester, but we could easily serve thousands with the capacity we have.”

In Colorado, the beefed-up online lab component helped pave the way to getting students credit toward their major if they transfer to four-year schools in Colorado. So far, the remote labs are available only for the first semester of the introductory courses, but the NANSLO team is developing activities for second-semester courses as well. The group hopes to expand to other courses such as environmental science, Branan said.

NANSLO is catching the eye of other university systems. “People are hearing about it, and we’re getting calls,” Branan said. He’s already spoken with representatives of the California State University and State University of New York systems. 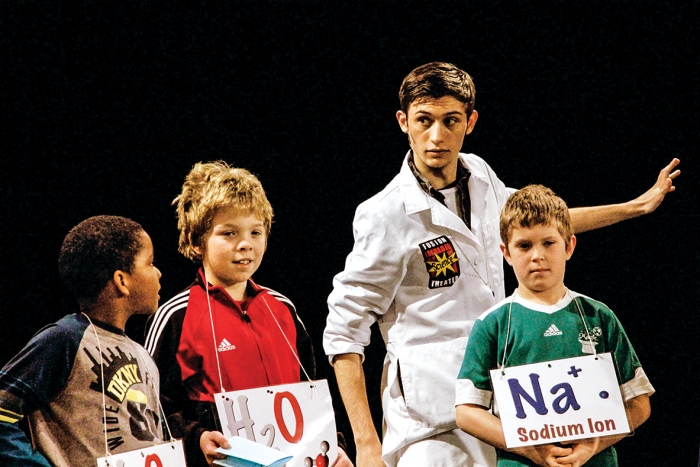 Since 2006, Fusion Science Theater has been using the dramatic arts to make science demonstration shows go beyond entertainment to deeper understanding. The group’s shows use a dramatic arc that presents an investigation question and then helps the audience answer it via related demonstrations and by getting audience members to act out a model of what’s happening. FST techniques are designed to hold interest and help the audience grasp and apply the underlying concepts.

Now everybody can get in on the act.

At BCCE, FST founder Holly Walter Kerby announced that FST has begun selling kits so anybody can perform its plays. Three kits are available—“If I Were An Atom,” a dramatization of how atoms move in the solid phase; “Bouncemania!” a one-person street-style show featuring a wrestling match between “happy” and “sad” balls that looks at the relationship between molecular structure and polymer properties; and “Will It Light?” an exploration of conductivity and the flow of electricity through different substances.

Each kit comes with a script, a video of a live performance, a props and materials list, instructions for assessing results, and the FST handbook for training and performance tips. Anyone who adequately prepares can lead an FST show—acting experience isn’t needed. However, presenters need to memorize lines, which have been carefully scripted to ensure educational effectiveness and scientific accuracy and to foster audience interaction.

FST kits are being distributed through the Institute for Chemical Education. Ordering information is available at http://ice.chem.wisc.edu/FST.html.

A small liberal arts college and a maximum security prison might not seem to have a lot in common. But during the spring semester of 2013, a group of students from St. Lawrence University, in Canton, N.Y., made the two-hour round-trip to take a chemistry class with inmates at a nearby prison.

Chemistry professor Samantha Glazier had just been granted tenure and was looking for a new challenge. “I teach at a well-off liberal arts college, and sometimes I felt too immersed in privileged society,” Glazier told C&EN. “The inmate population had the appeal that they were clearly not a privileged group of people.” The opportunity to teach a class to both “inside” students (students inside the prison) and “outside” students (St. Lawrence students) was just what she was looking for.

She taught a nonmajors chemistry course for 17 students—10 inside students and seven outside students. All the inside students had at least the equivalent of a high school education. They all had perfect behavior records, and because they would be interacting with female students, they couldn’t be sexual offenders. Glazier suspects that the outside students were attracted by the idea of helping prisoners.

The class met once a week for three hours. Glazier would lecture for five to 20 minutes. Then the students would work in groups on hands-on activities such as chemical model building or synthesizing nanoparticles. Afterward, they would discuss the findings as a group. Over the semester, the students wrote six papers and made a presentation. Her goal with the papers and presentations, which were based on readings, was to connect the fundamental science to aspects of society.

Glazier will get another chance to teach an inside-outside chemistry class during the spring 2015 semester. She doesn’t know whether it will be at the same prison or one of the others within an easy drive of St. Lawrence.

Next time she plans to include an environmental justice component. For example, she might include a unit on Love Canal, a neighborhood in Niagara Falls, N.Y., that was found, in the 1970s, to be sitting atop a toxic waste dump. “I want to organize it in a story format where there’s a problem followed by a climax and resolution,” she said.

Although she enjoys hands-on activities, Glazier plans to sharply curtail the number she does next time. Getting the necessary supplies through the gate wasn’t always easy.

“Some of it was using familiar terminology for the gate agents—instead of calling something acid, calling it vinegar,” she said. “I never lied about what I was bringing in.” The only thing that was outright refused entrance was M&M’s, which she wanted to use in a simple activity about atomic structure. “It turns out candy is highly regulated,” she said.

So she’s planning to minimize the amount of stuff she brings in. “It’s very difficult, and it puts a lot of strain on the people helping me,” she said. “I’m going to trend away from that as much as I think I can.”

Undergraduate Education
Block plan compresses one class into a few weeks for deeper learning
Undergraduate Education
C&EN talks with Joshua Ring, organic chemistry educator
Education
Preceptors Knit Classes Together
Share X
To send an e-mail to multiple recipients, separate e-mail addresses with a comma, semicolon, or both.
Title: All Eyes On Chemical Education
Author: Celia Henry Arnaud
Chemical & Engineering News will not share your email address with any other person or company.