Acquisition: Deal will create a powerhouse in lab products 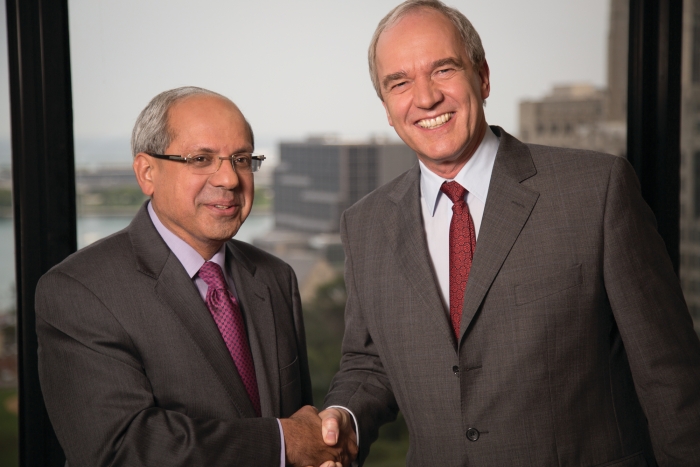 Sigma-Aldrich has agreed to be acquired by Germany’s Merck for $17.0 billion. The deal will join two of the largest suppliers of laboratory chemicals and ingredients for drug manufacturing into a business with more than 300,000 products, 2 million customers, and annual sales of more than $6 billion.

The acquisition “will secure stable growth and profitability in an industry that is driven by trends such as the globalization of research and manufacturing,” said Karl-Ludwig Kley, chairman of Merck KGaA’s executive board. It will also provide greater scale in the $130 billion life sciences market, particularly in the U.S., he said.

Merck views the deal as a way to build its Millipore life sciences business, which, alongside pharmaceuticals and performance materials, is one of three divisions at the $14 billion-per-year company. In 2010, Merck spent $7.2 billion to acquire Billerica, Mass.-based Millipore, which now employs about 10,000 people.

“The deal seems like a natural fit and takes Merck deeper into biology, with the Sigma business fitting well with Merck’s legacy chemical businesses and the acquired Millipore business,” Mizuho Securities USA stock analyst Peter Lawson told clients in a report on the deal.

The deal unites two firms with storied histories. Merck is a 350-year-old family-owned company that lost its U.S. business, Merck & Co., after World War I. Sigma-Aldrich was formed in 1975 from the merger of Aldrich Chemical, founded in 1951 by legendary chemist Alfred R. Bader, and Sigma Chemical. The company grew to have revenues of $2.7 billion in 2013. It employs about 9,000 people, including 3,000 scientists and engineers.

Together
[+]Enlarge
Merck and Sigma-Aldrich complement each other in major markets. SOURCE: Companies 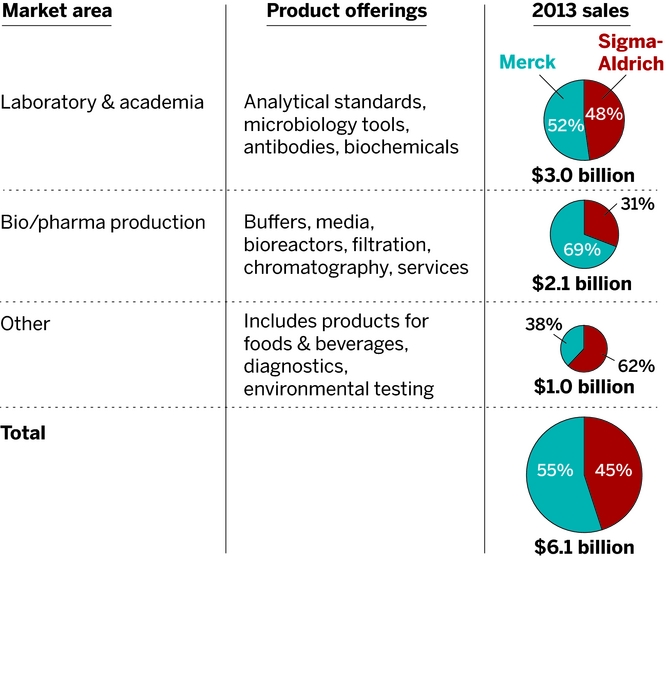 Merck and Sigma-Aldrich complement each other in major markets. SOURCE: Companies

With its offer of $140.00 per share in cash, Merck is offering a hefty 36% premium to Sigma-Aldrich’s recent stock price. “We believe this is a very positive outcome for our shareholders, who will receive a significant premium, and our employees, who will benefit from enhanced opportunities as part of a larger, more global organization,” Sigma-Aldrich CEO Rakesh Sachdev said.

Sachdev also cited benefits to customers, but for some scientists the deal brings uneasiness about Sigma-Aldrich’s future. Merck anticipates finding about $340 million in annual cost savings within three years, in part from consolidating manufacturing and optimizing sales and marketing. Merck says it will keep a significant presence in Sigma-Aldrich’s home city of St. Louis and in Billerica.

“I hope the company that I have come to know and really appreciate doesn’t end up changing,” said J. Gregory Reid, a chemist and industry consultant. As the main supplier to a firm he founded and later sold, Sigma-Aldrich “was key to our success because they really figured out how to be valuable to their customers.”

Reid reasons, however, that Merck is unlikely to make changes to such an established business. “They paid a premium because Sigma-Aldrich is a very strong brand,” he added.

Merck’s Kley seems to agree. “If you want to buy a Rolls-Royce, you don’t get it at a bargain price,” he told investors in a conference call last week. Kley acknowledged the strength of Sigma-Aldrich’s brand, even among Merck’s own scientists, and praised its industry-leading e-commerce system. “This is a platform that is heavily used by researchers and scientists all over the world, and to catch up with that is difficult for a competitor,” he said.

Compared with other large life sciences combinations, such as Thermo buying Fisher Scientific in 2006 and then Life Technologies in 2013, the price Merck is paying for Sigma-Aldrich is at the “high end of historical life sciences M&A,” Lawson said. Sigma-Aldrich shareholders must still approve the deal; no more approvals are required from the Merck side.

Comments
Fenton Heirtzler (October 2, 2014 8:07 PM)
I am nevertheless crossing my fingers for the careers of all those Sigma Aldrich chemists.
Reply »