Credit: Courtesy of Robert Ben
These ice crystals were grown in the absence (left) and presence (right) of a carbohydrate-based cryoprotectant.

In the freezer, there’s a fine line between preservation and destruction. Take, for example, a carton of ice cream. Left in the freezer too long, this cold, creamy treat transforms into a grainy, gritty disappointment.

Inferior ice cream isn’t exactly one of the world’s most pressing problems, but Matthew I. Gibson says old ice cream illustrates one of the major difficulties faced by anyone trying to store blood, stem cells, or other biological material via freezing. “Ice wants to grow bigger over time,” explains Gibson, a chemistry professor at England’s University of Warwick. “As the ice crystals grow bigger, they cause a lot of mechanical damage to the cells.”

Nature has figured out a way around this problem. Certain fish that live in polar regions are equipped with proteins that prevent them from freezing solid. Known as antifreeze glycoproteins, they lower the freezing point of fish blood and keep the ice crystals that do form from growing larger via recrystallization and damaging cells.

Proteins that prevent freezing have also been identified in certain plants and insects. But harvesting or synthesizing such molecules, also known as cryoprotectants, is both expensive and impractical. That’s why scientists have been searching for compounds that have the same antifreeze properties but are easy and inexpensive to make. Some small molecules already fit that bill, such as glycerol and dimethyl sulfoxide (DMSO), and are currently being used to preserve biological samples, but these compounds can be toxic to cells. So the hunt is still on for better cryoprotectants.

“A protein is just a polymer of amino acids,” Gibson continues. “So we thought, ‘Why can’t we just use a synthetic polymer as a cryoprotectant?’ ”

Previous work had shown that polyvinyl alcohol, or PVA, could slow the formation of ice crystals. The polymer is generally regarded as safe by the Food & Drug Administration for a wide range of applications, and feeding studies with animals have shown it’s possible to ingest large amounts with no adverse effects. So even though the molecule looks nothing like an antifreeze glycoprotein structurally, Gibson says it was an obvious choice for further study.

The key to PVA’s cryoprotectant properties is its size, Gibson’s group has found (Biomacromolecules 2013, DOI: 10.1021/bm400217j). Antifreeze properties seem to switch on when the PVA chain reaches a length between 10 and 20 repeat units, he says. “That’s really small for a polymer.”

And although the researchers still aren’t sure how the polymer is working, they can see that it does work. For example, Gibson says that when you freeze and thaw red blood cells without a cryoprotectant, all of them basically pop. But add in tiny amounts of PVA—about 0.1% of the blood’s weight—and many of those cells survive the freezing process (Nat. Commun. 2014, DOI: 10.1038/ncomms4244).

“Adding less material is what you want in the clinic,” Gibson says. Even if a cryoprotectant is biocompatible, you don’t want to put it into people—it needs to be washed away, he adds. “PVA doesn’t enter the cells, so it’s very easy to wash it away.” 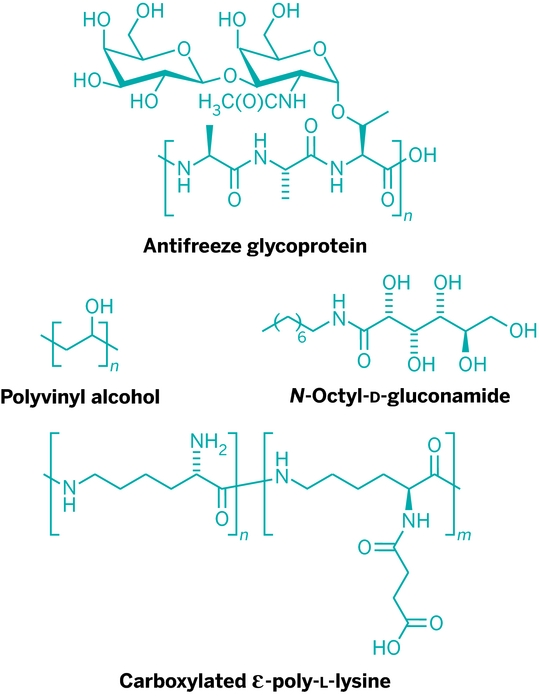 Kazuaki Matsumura, a polymer chemist and biomaterials scientist at Japan Advanced Institute of Science & Technology, in Ishikawa, has also been looking at polymers as cryoprotective agents. Originally, Matsumura tells C&EN, he wasn’t aiming to come up with a new cryoprotectant. But in the course of his research he had been cryopreserving cells with DMSO, which he learned had cytotoxic effects, particularly with regard to stem cells. “Some researchers in tissue engineering fields don’t want to use DMSO,” he says, “but there is no choice.”

Scanning the literature, Matsumura saw that there were very few studies about novel cryoprotectants, so he recognized an opportunity. He decided to look into polymers because he reasoned they would be unlikely to penetrate cell membranes and would therefore be less likely to damage cells.

He began by investigating polypeptides, starting with ε-poly--lysine, an inexpensive polypeptide that’s used as a food additive. But it showed toxicity because of its high positive charge, a phenomenon commonly observed for polycations. “I needed to neutralize the charge,” Matsumura says, “so I used succinic anhydride to introduce carboxylate groups.” The resulting carboxylated poly--lysine has pendant carboxylate groups on 50% or more of its lysine units, which turned out to be enough to confer cryoprotective properties and make the polymer safe for cells (Biomaterials 2009, DOI: 10.1016/j.biomaterials.2009.05.025).

Solutions of cryoprotective agents developed in Matsumura’s laboratory are commercially available from BioVerde Inc. A 100 mL solution costs about $110. Matsumura has also been working to apply the technology to cell sheets, with the goal of eventually being able to preserve tissue (BMC Biotechnol. 2013, DOI: 10.1186/1472-6750-13-58). “Cryopreservation is a key fundamental technology for industrializing regenerative medicine,” he says.

Several years back, Robert N. Ben, a chemistry professor at the University of Ottawa, was studying which structural features of antifreeze glycoproteins impart ice recrystallization inhibition. He was able to link the phenomenon to hydration of the glycoproteins’ carbohydrate region. Then his group found that carbohydrate-based small molecules had the same ability to inhibit ice recrystallization. Not every carbohydrate possesses the cryoprotectant property though, so Ben’s lab began rationally designing small molecules for use as cryoprotectants.

“What it boils down to is a hydrophilic component and a hydrophobic component, and there’s a delicate balance between these two properties within the same molecule that seems to correlate nicely with the ability to inhibit ice recrystallization,” Ben says. For example, his team recently showed that N-octyl--gluconamide, a carbohydrate with a hydrocarbon tail, could at low concentrations inhibit ice recrystallization, thereby keeping ice crystals small (Chem. Sci. 2012, DOI: 10.1039/c2sc00885h). Furthermore, Ben says, these carbohydrate-based compounds are inexpensive and easy to make from commercially available starting materials.

Ben says he’s particularly interested in developing these molecules as cryoprotectants for red blood cells and other blood products. Blood banks freeze red blood cells all the time, he points out, but they usually use glycerol to protect the red blood cells during the freezing process. Removing that glycerol when it comes time to give the cells to a patient can take up to 90 minutes for each unit of blood.

“When you need that blood right away, you can’t wait the hour and a half for that process to occur,” Ben says. And once the glycerol’s been removed, there’s a 24-hour window during which the blood must be used. “Groups that manage disasters and military field hospitals use a lot of blood products,” he adds. “And they tend to use a lot of frozen blood products because it’s hard to manage a supply of fresh blood that has to be stored at 6 °C.” For these people, better cryoprotectants for blood could mean the difference between life and death.