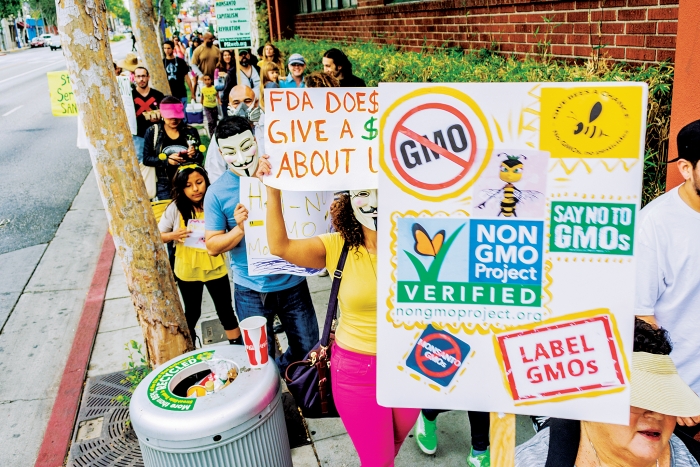 Enthusiasm for genetically modified (GM) crops appears to be waning. Opponents of the technology, which was once hailed for reducing the use of pesticides, say the benefits are rapidly disappearing. Many weeds and insects are now resistant to the limited number of traits that have been commercialized.

Consumers in the U.S., who paid little attention to government oversight of GM crops when they first hit the market in the 1990s, are beginning to question the safety of foods that contain GM ingredients. A growing number of advocacy groups are calling for mandatory labeling of GM foods so consumers know what they are buying and eating.

Farmers are also raising warning flags about the technology. They are concerned because some traits that are approved in the U.S. are not approved in other countries, including China, which was once a large export market for U.S. corn. China is now rejecting shipments of U.S. corn and soybeans that contain even a trace of the genetically engineered traits that are not approved there, causing the price of these crops in the U.S. to plummet.

Genetically Modified Crops By The Numbers

◾ Acres planted with biotech crops in developing countries: 232.5 million in 2013

◾ Acres planted with biotech crops in developed countries, including the U.S.: 200.4 million in 2013

SOURCE: International Service for the Acquisition of Agri-biotech Applications

Large chemical corporations and food companies, however, still see huge benefits and potential in GM crops. They argue that such technology has led to reductions in pesticide use, soil erosion, and water pollution when combined with no-till cultivation practices. They also say these crops have fewer pests, better yields, and reduced spoilage and produce more nutritious food.

To help sort through the conflicting information that is swirling around GM foods, a National Research Council (NRC) committee is reviewing available information on transgenic crops. The committee, which is expected to complete its work in early 2016, held its first public meeting last month to discuss the biggest barriers facing GM crops and lessons that can be learned from experiences with the technology so far.

The panel got an earful from those calling for increased government oversight and mandatory labeling of GM foods. Committee members also heard from industry that regulations are too stringent and that the high cost of gaining federal approval for products is prohibiting researchers from commercializing promising new transgenic traits.

Just two traits dominate the GM crop market. One allows crops to tolerate herbicides such as glyphosate, also known as Roundup. The other gives crops the ability to produce Bacillus thuringiensis (Bt) toxin, which acts as an insecticide against pests such as corn ­borers.

Some participants at the meeting highlighted the potential for genetic engineering to produce crops that require less nitrogen fertilizer or ones that are resistant to drought or salinity. But, said Major Goodman, a corn breeder at North Carolina State University, “Those are all things that are well beyond our current abilities.”

Goodman said that he is unimpressed with the traits that have been commercialized so far. These are useful, but they will likely only remain so for 10 to 15 years because weeds and insects are becoming resistant to them, he said.

Likewise, R. James Cook, a plant pathologist, said researchers at small seed companies and land-grant universities have shelved hundreds of improved varieties of genetically engineered crops because of the high cost of obtaining regulatory approval. Among them is a variety of barley that was genetically engineered to improve fermentation for beer making, said Cook, a professor emeritus at Washington State University.

In the U.S., GM crops are regulated by several government agencies. The Department of Agriculture ensures that these products are not plant pests. The Environmental Protection Agency reviews the safety of these crops when they incorporate a pesticide, such as Bt toxin. The Food & Drug Administration has jurisdiction over the safety of foods that contain GM products.

Compared with regulations in Europe, those in the U.S. are lenient, particularly with respect to field-testing crops with new traits, pointed out Ian T. Baldwin, an ecologist and plant biologist at the Max Planck Institute for Chemical Ecology, in Germany. When Baldwin planted transgenic seeds in research field plots in Germany, the plots were attacked twice by people who are opposed to GM food. Then legislation was adopted that made it “basically impossible to do field releases,” he said.

So Baldwin, for the past 14 years, has been testing crops with new traits at the Lytle Ranch Preserve in Utah, owned by Brigham Young University. He makes regular trips back and forth between Germany and the U.S. It would be “simply wonderful” if Europe would adopt U.S. regulations regarding GM crops, he said. The current situation in Europe is stifling, he added.

Not only do researchers have to navigate complicated regulations to get GM traits approved, they also have to convince the public to accept the technology for it to be successful. And that is becoming more difficult because public skepticism over the safety of GM food is growing, particularly in the U.S. Such suspicion has long been a barrier in Europe.

A prime example of a product that was not successful because of social acceptance issues in Europe was Monsanto’s NewLeaf potato, which was engineered to make a toxin that repels the Colorado potato beetle. Monsanto pulled the product off the market in 2001 because of poor sales. The main reason it didn’t catch on is because fast-food giant McDonald’s told its french fry suppliers to stop using GM potatoes, Cook said. McDonald’s was concerned about repercussions in Europe if it tried to market french fries made from GM potatoes, he said.

Today, a growing movement in the U.S. is questioning the safety of GM foods, despite the lack of scientific evidence that these products pose a health risk or have caused any human health effects. Protesters have marched through many U.S. cities this year, calling for mandatory labeling of GM foods.

According to data from the advocacy group the Center for Food Safety, 64 countries currently have labeling laws. The U.S. is not one of them.

In the absence of a federal mandate, lawmakers in several U.S. states have introduced legislation that would require labeling of GM foods at the state level. Vermont, Connecticut, and Maine have passed such bills. Vermont’s law is scheduled to go into effect in July 2016. Effective dates in Connecticut and Maine are contingent on neighboring states passing similar bills.

These state food-labeling laws are facing fierce opposition, however, particularly from large food corporations and the trade associations that represent them, including the Grocery Manufacturers Association. Shortly after Vermont’s bill was signed into law, GMA sued the state. That lawsuit is ongoing.

Mandatory food-labeling measures are also popping up on state ballots. Such initiatives failed to garner enough votes in California in 2012 and in Washington last year. In early November, voters in Colorado and Oregon will cast ballots on labeling initiatives.

Large food and chemical corporations, including Monsanto, DuPont Pioneer, Dow AgroSciences, and Bayer CropScience, have poured tens of millions of dollars annually over the past few years into campaigns against mandatory labeling of GM foods.

Those in support of mandatory labeling include food-safety activists, small-scale producers, organic farmers, and the Organic Consumers Association. These groups have also spent millions of dollars to campaign for mandatory labeling.

The push for labeling is being driven by consumers who want to purchase products that reflect their social, environmental, and ethical values, said Carmen Bain, a sociology professor at Iowa State University. “For many people, the issue is not a scientific issue,” Dietram A. Scheufele, a professor of science communication at the University of Wisconsin, Madison, said at the meeting. “It is an issue that has ethical, legal, and social implications.”

In addition, GM foods “are the least well studied and have the most lax regulations of any major technology that has come along,” said Charles M. Benbrook, a research professor at the Center for Sustaining Agriculture & Natural Resources at Washington State University. In the early 1990s, FDA decided not to require a label on GM food unless the food was substantially different from its conventional counterpart in nutrient and allergen content. The agency chose not to regulate the new traits as food additives, which are rigorously tested for safety. Rather, it deemed them as “generally recognized as safe” ingredients, which do not require premarket testing.

Benbrook urged the NRC committee to lay the foundation for new research to confirm the safety of GM foods. Once those tests have been conducted, “I would expect that most of the technologies are going to test out fine and that there will be a broad consensus that there is no reason for concern,” he said. “But until the science is done, there’s going to be this skepticism.”