Another Run At Worker Protection 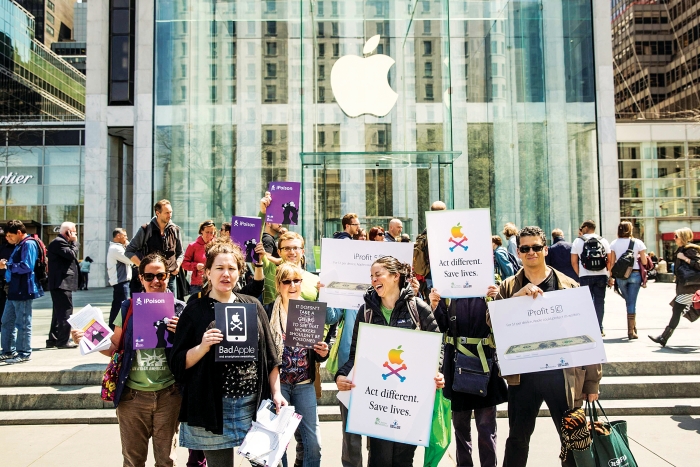 Credit: Newscom
Protesters earlier this year called for Apple to protect workers who make its products from exposure to n-hexane, which can cause nerve damage. The company has since banned the use of the substance.

Federal regulators are trying to reshape a moribund and ineffective system to protect workers from toxic airborne chemicals. As part of this effort, the Occupational Safety & Health Administration is seeking input from chemical and pharmaceutical companies that have workplace exposure standards that in some cases are more stringent than OSHA’s.

The focus is on OSHA’s permissible exposure limits (PELs) for airborne chemicals in U.S. workplaces. PELs are the cornerstone of how the federal government manages workers’ exposure to hazardous chemicals, says David Michaels, who heads OSHA, an agency within the Department of Labor. Yet after decades of failing to write new PELs or update old ones, OSHA says the regulatory system is not protecting workers.

Each day, U.S. workers use tens of thousands of chemicals at levels that are suspected of causing harm—and their exposures to these substances are not regulated by the federal government, Michaels says. OSHA has set exposure limits for fewer than 500 chemicals used in workplaces.

“New chemicals are being introduced into work sites every year,” he explains. “OSHA is struggling to keep pace with the potential hazards.” As a result, in the 40 years after the creation of OSHA, thousands of American workers have become ill or died from exposure to hazardous chemicals. He calls long-term exposure to workplace chemicals a “silent killer.”

In addition, many existing PELs are inadequate to protect workers and are based on information that is decades out of date, the agency acknowledges. Nearly all—95%—of today’s PELs are based on data collected in the 1950s and ’60s, according to OSHA. Since Congress founded the agency in 1971, OSHA has successfully established or updated the exposure limits for about 30 chemicals. The agency has issued only one new PEL since 2000.

As a result, many U.S. workers are currently being exposed to levels of chemicals that are legal, but not safe, Michaels says.

Earlier this month, OSHA announced a “request for information” about PELs. Michaels stresses that the agency is not seeking data for new regulations. Instead, it wants ideas from stakeholders, including chemical makers and labor unions, on how to overhaul and streamline the entire system that sets workplace exposure limits.

“We need more efficient, effective ways to protect our workers,” he says, and the information request is the first step.

Over the years, OSHA has made several attempts to issue and update workplace chemical exposure limits. The most significant attempt was in 1989, when the agency, through a single regulation, tried to add or update nearly 400 PELs for a number of industries. The rule analyzed risk to workers as well as economic and technological feasibility of putting the new limits in place. At the time, OSHA estimated the changes would prevent 683 fatalities each year.

Industry and labor groups challenged the rule, according to OSHA background material. A federal appeals court struck down the rule in 1991, saying it lacked the necessary detail that OSHA had put into previous PELs and the agency needed to do more involved analyses. The court also ruled that the agency must set a PEL for each individual chemical and each industry, rather than establishing several limits in one regulation.

The upshot of the court’s decision is that PELs take years and a huge investment of OSHA staff time to develop. The agency must generate hundreds, if not thousands, of pages of analysis for each chemical and for each industry, Michaels says.

OSHA returned to the drawing board on PELs in the mid-1990s. It held meetings with labor and companies, eventually developing a new approach for setting PELs. It selected seven chemicals for analysis: glutaraldehyde, carbon disulfide, hydrazine, perchloroethylene, manganese, trimellitic anhydride, and chloroprene.

While OSHA developed the PELs, the years ticked by, and companies trimmed use of the seven chemicals or limited workers’ exposure. In some cases, the cost to OSHA was too great to justify the review, and the process stalled.

Meanwhile, many chemical and pharmaceutical manufacturers instituted their own worker exposure limits that are frequently tougher than OSHA’s, Michaels says.

“When I go to meetings with industry managers, I ask how many use OSHA PELs for limits in the workplace, and a small number of hands, if any, go up,” Michaels says. “Their environmental, health, and toxicology departments had already set their own limits, which are safer than OSHA’s. In many cases, they have even required companies that buy their chemical products to set limits tougher than OSHA’s.”

Although some companies set stricter exposure standards, others abide by federal PELs. This means that U.S. workers exposed to the same substance may have inconsistent and contradictory levels of protection.

Michaels cited n-hexane, a solvent widely used in workplaces in the U.S. and elsewhere. Facing consumer protests about adverse neurological effects from n-hexane exposure in Taiwanese workers assembling its products, computer giant Apple earlier this year announced that it was halting use of the substance. A study of Hong Kong workers reported an outbreak of peripheral neuropathy in an offset printing factory where workers were exposed to between 63 and 132 ppm n-hexane.

Under an OSHA PEL, U.S. workers can legally be exposed to 500 ppm n-hexane. That’s 10 times as high as workplace safety and toxicology professional organizations recommend.

OSHA’s review appears to enjoy backing from both unions and companies.

“The question is how to update PELs,” notes Michael J. Wright, director of health, safety, and environment for United Steelworkers. “The substance-by-substance approach is, at best, capable of addressing one or two chemicals a year.” The possibility of Congress revising the Occupational Safety & Health Act so OSHA can establish more than one exposure limit at a time is unlikely, he says. “There are a lot of other ideas floating around,” Wright says, adding that United Steelworkers will present some to OSHA.

American Chemistry Council officials point out that its member companies have developed their own occupational exposure limits, which are similar to PELs, to address site-specific workplace concerns. The chemical industry association also notes that its members comply with state requirements for workplace chemical exposure limits, such as those in California, that are stricter than federal PELs.

The group says OSHA should retain PELs as the core element of a comprehensive, risk-based approach to controlling occupational exposures. But ACC says it too will offer ideas to OSHA in response to the agency’s information request.

One alternative idea that Michaels, the OSHA chief, promotes is encouraging employers to substitute a less hazardous chemical for a more toxic one. Another is a hazard assessment and management practice called control banding, which many pharmaceutical and chemical manufacturers use. It involves determining the type of exposure control, such as ventilation or use of personal protective equipment, based on the type of hazard posed, such as skin irritation or carcinogenicity, and the level of exposure, for example high or low. Control banding applies generically to all chemicals in the workplace. Adoption of other approaches could protect workers faster than the existing regulatory system does. ◾

Safety
COVID-19 pandemic has spurred materials researchers to develop antiviral masks
Industrial Safety
The chemistry behind the Beirut explosion
Consumer Safety
Do we know enough about the safety of quat disinfectants?
Share X
To send an e-mail to multiple recipients, separate e-mail addresses with a comma, semicolon, or both.
Title: Another Run At Worker Protection
Author: Jeff Johnson
Chemical & Engineering News will not share your email address with any other person or company.