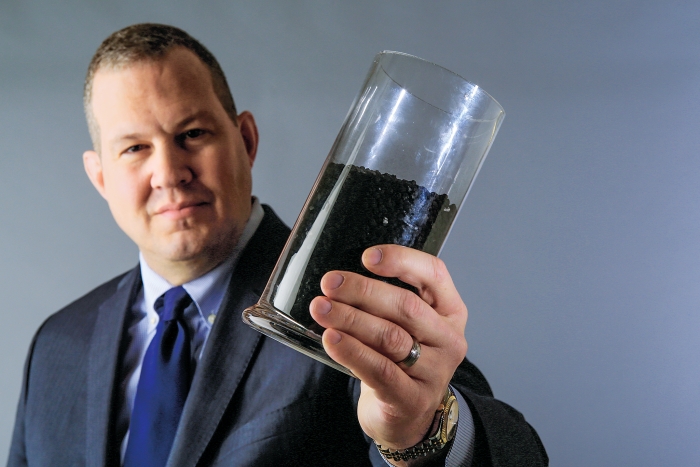 In the two years since he became chief executive officer of Calgon Carbon, Randall S. Dearth has had to tackle potentially big growth opportunities while also confronting a vocal shareholder that had its own ideas about improving company earnings.

The stock market, at least, seems to think Dearth has been succeeding. Calgon’s share price has risen more than 40% since Dearth became CEO on Aug. 1, 2012, better than the Standard & Poor’s 500 index, which is up 35%.

Dearth, 50, who came to Calgon after stints at Bayer and more recently Lanxess, where he was CEO of U.S. operations, attributes the firm’s good stock performance to “focusing on the bottom line, emerging markets, and a good balance sheet.” That focus helped the firm satisfy the activist investor Starboard Value without adopting the master limited partnership structure that Starboard was urging.

Calgon’s main business, accounting for about 85% of its $548 million in 2013 sales, is activated carbon, a form of carbon that has been processed with oxygen to create millions of tiny pores.

One gram of activated carbon has a surface area equivalent to five tennis courts, or nearly 13,000 sq ft. The large surface makes activated carbon an ideal absorption medium for purifying water, gases, chemicals, and air, according to Kerry Satterthwaite, a senior analyst at the U.K. minerals consulting firm Roskill.

Calgon makes 150 million lb per year of activated carbon, all of it from coal. A focus on the bottom line­—including bringing down the price it pays for coal and eliminating a large number of small-volume activated carbon products—has saved the firm $40 million since Dearth came on board, he says.

New Environmental Protection Agency regulations set to go into effect next year will create a $1 billion-per-year market for mercury removal equipment and consumables such as activated carbon, says Robert McIlvaine, president of the consulting firm that bears his name.

But other activated carbon sellers including Cabot, Albemarle, and ADA Carbon Solutions are also looking for a share of the market, and that could limit profits, McIlvaine says. In addition, mercury removal technologies incorporating bentonite and kaolin clay will compete against activated carbon, he adds.

STACKED
[+]Enlarge
Credit: Luminant
Removal of toxic mercury emission from coal-fired power plants such as this one in Texas is a big, developing market for activated carbon. 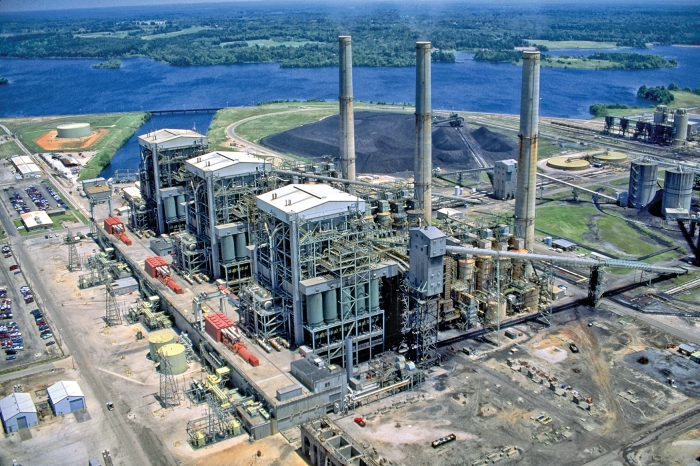 Credit: Luminant
Removal of toxic mercury emission from coal-fired power plants such as this one in Texas is a big, developing market for activated carbon.

Dearth is not rushing to increase capacity in anticipation of the mercury opportunity. Calgon won’t know until later this year what piece of the pie it has, he says. Until Calgon has firm orders in hand, it is tweaking existing production lines for incremental capacity increases.

Calgon is also eyeing China as a potential market for mercury removal. Heavily dependent on coal for power, the country could ultimately be a mercury removal opportunity many times larger than the U.S. market. “Given the environmental situation that China finds itself in, this could be an easy win” for activated carbon, Dearth observes.

Longer term, Calgon is considering the addition of production lines, grassroots plants, or even acquisitions to get capacity when it is needed, Dearth says. The firm is also looking at growing demand from its municipal water treatment market, where new EPA regulations to remove chlorine by-products offer opportunities.

Also emerging as a business for Calgon is a system that kills microorganisms in ship ballast water with ultraviolet light. Part of the firm’s $54 million-per-year equipment business, the system helps prevent the spread of nonnative aquatic species in lakes, rivers, and coastal waters.

Like many of the uses for activated carbon, the ballast water treatment market depends largely on regulatory actions. Dearth explains that the International Maritime Organization, a United Nations agency, has drafted regulations requiring treatment. But they will not come into full force until 35% of member nations sign on; 33% have signed so far, and Dearth is hoping that the threshold will be crossed by the end of this year.

Some of those ships will be equipped with chemical treatment systems, Dearth acknowledges, but he hopes many will adopt Calgon’s UV system.

“The ballast water treatment business has tremendous growth potential,” agrees Daniel Mannes, an analyst at Avondale Partners who covers Calgon. But he cautions that the treaty implementation period will stretch over 10 years. “They have a good system, but the market will be very competitive,” Mannes says.

Although Calgon anticipates growth ahead, it remains cautious on spending. “The firm has a very good balance sheet,” Dearth points out: Its long-term debt at the end of 2013 was just $32 million. Calgon is also nicely profitable, with an operating profit margin of 17.6%, compared with an average of 14.6% for the top 50 U.S. chemical firms C&EN tracks.

Despite Calgon’s strong financial condition, Starboard Value, which once held a nearly 10% stake in Calgon, thought the firm could do better. In November 2013, Starboard wrote a letter to Dearth urging the firm to restructure as a master limited partnership (MLP). Such a structure, mostly adopted by energy and transportation firms, could cut corporate income taxes and increase dividends to investors, Starboard argued.

Dearth wasn’t the only CEO to hear from activist investors in recent years. Dow Chemical, DuPont, and Ferro, to name a few, have tangled with activists. Unlike CEOs who took on a defensive posture when targeted by activist investors, Dearth did not assume an adversarial tone with Starboard.

“I’m not against something that will create value for shareholders,” Dearth says. “I don’t know MLPs. I’m a chemist for God’s sake.” So Calgon hired bankers to explore Starboard’s suggestion, and they concluded that the structure didn’t make sense.

In the meantime, Calgon continued a stock buyback program and its cost-cutting effort. Seemingly placated, Starboard has cut its stake in Calgon to less than 5%.

With its strong balance sheet, Calgon could afford to buy a competitor. But Dearth is cautious about aggressive merger and acquisition moves. “I spent 24 years in the chemical industry prior to coming to Calgon. I know that if they aren’t done properly, mergers don’t work,” he says.

Whatever growth initiatives Calgon takes will be carefully evaluated. Dearth is leery about predicting what Calgon will look like five years from now. “I’ve been here only two years. Give me a little more time,” he says.

What Dearth is certain of is that Calgon has good assets in the right markets for growth. “We are a company in positive transition right now,” he says.