A look at recent patenting activity in metamaterials, brought to you by C&EN and CAS

[+]Enlarge
Credit: Kyoungsik Kim/Yonsei U
A red ball pushed under a cloaking metamaterial deforms its repeating structure (black-and-gray grid). The deformation locally changes the material’s refractive index (color gradient) such that incident light is reflected as if there were no deformation, rendering the red ball effectively invisible. 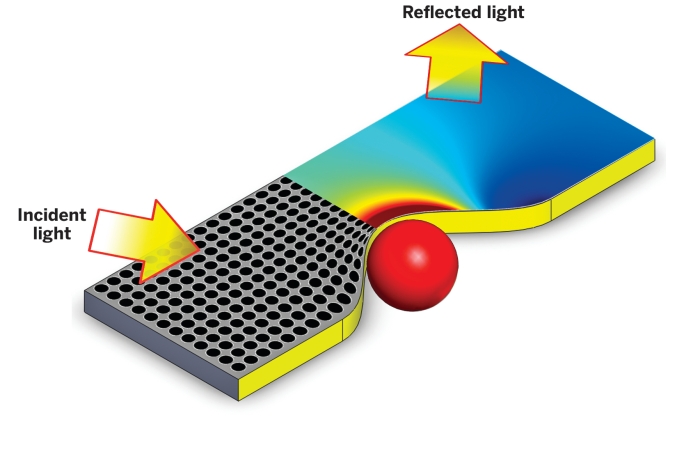 Credit: Kyoungsik Kim/Yonsei U
A red ball pushed under a cloaking metamaterial deforms its repeating structure (black-and-gray grid). The deformation locally changes the material’s refractive index (color gradient) such that incident light is reflected as if there were no deformation, rendering the red ball effectively invisible.

Metamaterials promise to control electromagnetic radiation in ways once thought impossible: They could bend light to hide soldiers from prying eyes, move light efficiently through the circuits of optical computers, focus sound such that it can destroy tumors, and enable ultrasound imaging of areas of the body that are normally obscured. The properties and behaviors of these composites depend on the precise positioning and orientation of their component parts. In particular, the size of these building blocks is critical to steering radiation in new ways; to manipulate visible light, for example, engineers need to make parts in the 10–20-nm range. Constructing materials to such exacting tolerances is a challenge, but patenting activity in Chemical Abstracts Service databases shows that researchers are making progress. Four such patents are featured here.

To easily produce the nanomeric structures necessary for metamaterials that can manipulate light in the visible region, researchers recently described the use of a genetically modified viral protein shell as a template for forming metamaterial structures (US 20140194602). Banahalli R. Ratna and her colleagues at the Naval Research Laboratory’s Center for Biomolecular Science & Engineering modified the protein shell of a cowpea mosaic virus so that it presents cysteine thiol groups on its surface. Metal nanoparticles self-assemble at these thiols to form nanostructured metamaterials. The researchers demonstrate the strategy’s power by using it to rapidly grow plasmonic nanostructures that can control visible light, but they suggest it promises a high-throughput route to other novel metamaterials, too.

“Invisibility cloaks” are one of the most commonly mentioned applications for metamaterials. Such an invisibilty cloak would cause incident light to bend around the object it covers so that it appears that no object is there. But in general, an effective cloak must fit snugly around the object—so rendering an object invisible requires designing a custom cloak. In a 2014 South Korean patent (KR 1435892), Yonsei University’s Kyoungsik Kim, Duke University’s David R. Smith, and colleagues show a way around the need for that rigidity: They made a one-size-fits-most cloak from an elastic metamaterial that makes objects appear flattened out. They demonstrate the cloaking effect for a wide band (2–20 GHz) in the microwave region and suggest the principle will extend to other kinds of radiation as well.

The ability to image structures within cells is of great utility to both biological research and medical diagnosis. But techniques used for this purpose have drawbacks: Optical microscopy requires fluorescent labeling, which can alter the physiology of the cells, and surface plasmon resonance microscopy requires the use of complex optical coupling elements. A simplified, label-free intracellular imaging alternative comes from National Tsing Hua University’s Ta-Jen Yen, Cheng-Kuang Chen, and Yueh-Chun Lai (US 20140131559). In this patent application, the researchers describe the construction of a metamaterial that can reveal the detailed inner structure of organelles within human stem cells grown on its surface.

Managing heat in semiconductor devices is always a challenge; heat tends to build up where it’s least wanted. In a recent patent, Yannick C. Morel and Igor I. Smolyaninov of BAE Systems describe a way to use metamaterials to improve the thermal conductivity of lasers (WO 2014039518). The strategy relies on layering materials that have dielectric constants of opposite signs. Using this architecture, the researchers were able to select materials so that the structures could efficiently transmit both light and heat. The researchers use the resulting metamaterials to build solid-state lasers that conduct heat away from where it’s not wanted.

Share X
To send an e-mail to multiple recipients, separate e-mail addresses with a comma, semicolon, or both.
Title: Patent Picks: Metamaterials
Author:
Chemical & Engineering News will not share your email address with any other person or company.