Computational chemistry generally tries to reproduce experimental reality, but a new study suggests that in the future, the situation may be reversed. The study is one of the first to meet a long-standing goal of theoretical chemistry: its use as a discovery tool to find new reaction products and mechanisms. The technique could lead to a better understanding of complex reactivity and reaction pathways in catalysis, biochemistry, and other areas.

REACTIVE MOVIES
Credit: Courtesy of Lee-Ping Wang & Todd Martínez
The Stanford group demonstrated the capabilities of their new ab initio nanoreactor by simulating reactions with different levels of molecular complexity: Acetylene polymerization (top) and the classic 1953 Urey-Miller reaction. The simulations generate products found experimentally in those reactions as well as others that have not. The acetylene simulation yielded nearly 100 distinct products, including methane, ethylene, cyclopropene, benzene, and larger polymeric species with aliphatic or aromatic character. The Urey-Miller simulation generated over 600 products, including urea, ethylene glycol, isocyanic acid, glycine, an alanine analog, and the unnatural amino acids α-hydroxyglycine and α-aminoglycine.

In the study, Todd J. Martínez and coworkers at Stanford University report an “ab initio nanoreactor” that uses molecular dynamics to model chemical reactions from first principles (Nat. Chem. 2014, DOI: 10.1038/nchem.2099). The nanoreactor finds reaction products discovered in the laboratory previously, but it also finds some new products. And it can trace the steps leading to the formation of each compound.

The nanoreactor computationally shakes up and compresses molecules in reaction mixtures and then solves quantum mechanical equations to simulate the resulting breakage, formation, and rearrangement of chemical bonds. It identifies reaction products and traces minimum-energy pathways between reactants and products to determine mechanisms.

“It is not difficult to find a number of issues in this work that are easy to criticize,” comments computational chemistry expert Bernd Ensing of the University of Amsterdam. For example, he mentions the study’s “inaccurate and low level of theory” and its “crude manner” of accommodating longer reaction times by changing reactor volume to simulate unusually high pressures and temperatures. Nevertheless, Ensing adds, the new study “is an important pioneering milestone that may lead to a paradigm shift and a new way of thinking about performing in silico experiments.”

Computational approaches have generally simplified reaction simulations by following experimentally determined pathways or steps. The ab initio nanoreactor instead lets reactions proceed on their own, Ensing points out. Without the usual experimental guidance, “the molecular system is free to do unexpected chemistry, which could lead to interesting discoveries,” he says.

Martínez and coworkers used the system to simulate two reactions. The first, the polymerization of acetylene, produced nearly 100 products. Some of these have appeared in previous high-pressure experiments on acetylene, but others have not, including aromatic rings, allenes, and antiaromatic, highly strained rings.

“There may be a natural partnership between the theoretical methods reported and high-pressure chemical investigations,” says high-pressure experimentalist John Badding of Penn State University. “The prediction that more is happening than merely formation of single and double carbon-carbon bonds will likely stimulate interest in exploring the high-pressure chemistry of acetylene in greater detail.”

In the second reaction, compounds proposed to exist in the atmosphere of early Earth reacted to form biomolecules, similar to the classic 1953 Urey-Miller experiment. The simulation yielded more than 600 products. Again, some of these were not observed experimentally.

“With the continuous increase of computer power and improved algorithms, it was inevitable that one day scientists would be able to simulate chemical reactions in a reactor at a molecular level,” Ensing says. “As such simulations get more accurate and realistic, they will become more and more important to supplement and eventually replace parts of experimental chemistry.” 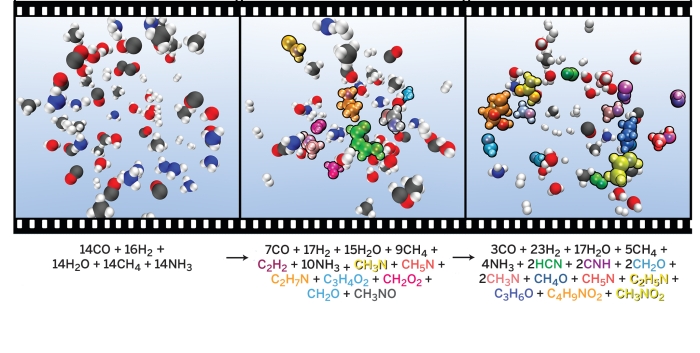 Computational Chemistry
Machine learning predicts electronic properties at relatively low computational cost
Physical Chemistry
Computational Models Of Multistep Reaction Are Called So Flawed They Are ‘Not Even Wrong’
Physical Chemistry
Reaction Modeling Enhances Experiment
Share X
To send an e-mail to multiple recipients, separate e-mail addresses with a comma, semicolon, or both.
Title: Simulation Technique Finds Reaction Products Not Seen In Experiments
Author: Stu Borman
Chemical & Engineering News will not share your email address with any other person or company.

Comments
E. CHINNARAJA (November 8, 2014 6:09 AM)
By practical, is it possible for isolating individual compound from mixture of 100 compounds?
Reply »