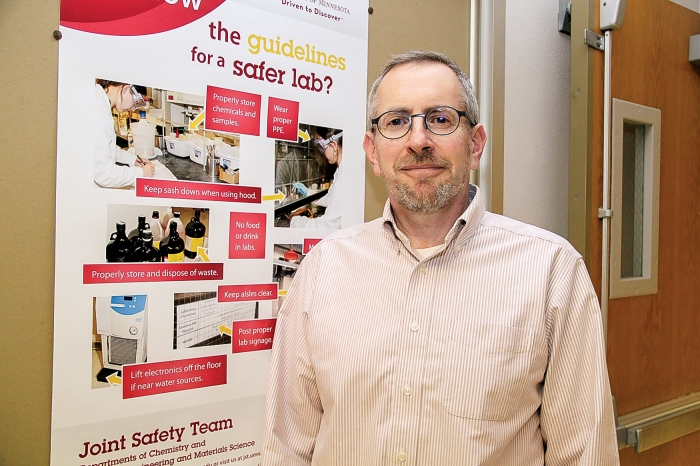 Earlier this year, a graduate student was attempting to make 200 g of azidotrimethylsilane when an explosion occurred. The June 17 blast destroyed the fume hood in the University of Minnesota chemistry lab where the student was working and sent the student to the hospital.

The basic cause of the incident was lack of hazard awareness, says department chair William B. Tolman. The student has recovered from his injuries, but the department’s response is ongoing. Tolman has implemented several measures focused on identifying hazardous processes in the lab and improving communication about safety matters.

The student’s research group had scaled up the azido compound synthesis, which started with the reactants chlorotrimethylsilane and sodium azide, from previously published methods (C&EN, Oct. 27, page 2). The researchers also changed the solvent because of clumping problems. The reaction involves a heterogeneous mixture, and some literature indicated that switching the solvent to polyethylene glycol (PEG) would help the reactants mix better. But PEG is hygroscopic, raising the risk that azide could react with water to produce explosive hydrazoic acid. Additionally, PEG is protic, so azide could also have reacted with the solvent to yield hydrazoic acid.

“There was a real reason to use PEG,” Tolman says. But the researchers hadn’t thought through the risks, which included possible detonation from hydrazoic acid formation or sodium azide overheating.

“Overall, there was clearly a lack of proper hazard assessment,” Tolman continues. “They didn’t stop and say, ‘This is a really dangerous procedure. Should we be doing this at all, or should we be taking extra precautions?’ ” The lab became complacent after doing the reaction several times without incident, he believes. And warnings included with literature protocols were “pretty lame,” he says.

Tolman notes that no lab in his department has the proper equipment to allow the reaction to be performed safely at the 200-g scale. He has now set a limit of 5 g for any procedure involving azide.

Tolman announced that limit and other follow-up actions in a department-wide meeting in July at which he discussed the incident investigation findings. What he calls a “lively” 45-minute discussion ensued. Such meetings are important for leaders to publicly acknowledge the importance of significant incidents and show support for discussing safety concerns, Tolman says. “The emphasis was not on assessing blame,” he adds, “but rather on what we should all do to improve risk assessment.”

In addition to limiting the scale of azide reactions, Tolman ordered lab groups in his department to assess their standard operating procedures and update them if necessary. The goal was to get everyone to stop and think about whether they’re doing anything that is potentially hazardous, whether they have a procedure for that activity, and whether that procedure is correct, he says. That lab self-assessment was completed in August, and the department’s safety committee is now working out how to do a peer review of the methods.

Chemistry lab groups at Minnesota must also now use safe operation cards on hoods to communicate who’s running a reaction, what it is, the chemicals it involves, and its associated hazards. Safe operation cards are something that the department learned about through interactions with Dow Chemical to promote lab safety (C&EN, Oct. 29, 2012, page 21), but logistical challenges had held up department-wide implementation. According to Tolman, “This incident spurred me to say, ‘Enough. Let’s stop dithering.’ ”

Another mandate Tolman put in place is that groups must now hold monthly meetings at which safety is discussed. “Larger groups seem to be communicating effectively. They have regular group meetings and safety moments and discussions,” Tolman says. “Smaller groups were perhaps not doing this as well.” He defines a large group as one with more than his department’s average of eight people.

Overall, though, it is the hazard assessment piece that Tolman thinks is the take-home lesson for the broader academic chemistry community. Departments and faculty need to do a better job of ensuring that young researchers perform risk assessments to identify what might go wrong and to consider the limits of available safety controls, he says. Also, researchers should not assume that journals include complete safety information; researchers need to consult multiple sources.

“I think our safety culture has improved a lot” in recent years, Tolman says about his department. “But like any culture, there’s variable adhesion to it, so you have people who are strong players and leaders who are ahead of the game, and people just going along for the ride.” It’s a challenge to ensure that all 300 people are fully tuned in, he says, but that’s where the community as a whole has to step up. “We have to look out for each other.”

Safety
Creating a strong safety culture
Safety
How educators are teaching students to assess risk in the lab
Safety
Chemistry Professors Promote Lab Safety
Share X
To send an e-mail to multiple recipients, separate e-mail addresses with a comma, semicolon, or both.
Title: C&EN Talks Safety With Minnesota Chemistry Chair William B. Tolman
Author: Jyllian Kemsley
Chemical & Engineering News will not share your email address with any other person or company.

Comments
John Gladysz (November 12, 2014 9:15 PM)
I wish the publisher would make it possible to make a nice PDF file of this article. Right now the "print" command carries all of the advertisements and peripheral information with it, which detracts/distracts from the important core safety message, which is the reason I would like to make a "clean" PDF for distribution to my research group. Said differently, if the publisher is reporting this to promote safety, it would be more useful to the community in a cleaner print/pdf format.
Reply »

Robert Buntrock (November 18, 2014 4:23 PM)
Excellent response to an unfortunate and preventable incident. Regular safety meetings have been required in most if not all industrial research labs for decades and should also be done in academia. If a group is too small to support regular meetings, they should combine forces with other small groups or the larger groups conducting them

While still an undergrad, I worked with HN3, with great caution. We were using the Schmidt Rearrangement to convert cyclic ketones into amides as precursors for novel amino acids. The method involved slowly adding, dropwise, acid into the reaction flask containing a solution of the ketone and sodium azide. To avoid buildup of the very dangerous hydrazoic acid, the addition was done slowly. The main indication of too rapid addition was, even though the reaction was run in the hood, if the operator started to get a typical headache (you knew it when you got it), the addition was ceased and the operator took a break and walked away from the hood.

I'm not familiar with this prep but the best way to handle HN3 is by the method above or similar. Any scale-up is dangerous. This safety information is well known and should have been known by the chemists involved.
Reply »

Pengju Ji (December 15, 2014 7:42 AM)
I just cannot believe how the student could come up with the idea to make 200g of this azido compound without checking the MSDS? Did his supervisor know this in the first place? Apparently not.

I used the sodium azide to make azidonitrobenzene, only in several hundred mg scale, the solvent was DMF. Even so, my supervisor was not very happy with the storage of azidonitrobenzene in the lab.

Cautions must be taken when using azide and azido compounds.
Reply »