The Gladiator Diet, Bridge For Sale

[+]Enlarge
Credit: Wolfgang Pietsch/Austrian Archaeological Institute
Wounded warrior: Skeletons like this one, unearthed at a site in Turkey, are the remains of Roman gladiators.

Credit: Wolfgang Pietsch/Austrian Archaeological Institute
Wounded warrior: Skeletons like this one, unearthed at a site in Turkey, are the remains of Roman gladiators.

Forget the Paleo Diet. Noshing on meats and vegetables once eaten by the humble caveman is so last year. The ancient nutritional fad that’s trending now is the Gladiator Diet.

A team of forensic scientists reported last month in PLOS One that Roman gladiators—the athletic superstars of their day—likely kept in shape by chugging a drink made of plant ash (DOI: 10.1371/journal.pone.0110489).

What’s left behind after burning trees or plants is a high-mineral-content ash, explains Fabian Kanz, one of the team’s leaders and a forensic anthropologist at the Medical University of Vienna, in Austria. So the finding isn’t all that strange: Gladiators imbibing charred greenery, he says, are like people today taking drugstore calcium or magnesium supplements.

Kanz and coworkers arrived at the idea that these gladiators had their own sports drink after analyzing skeletons excavated from a cemetery in what was once the Roman city of Ephesus. The burial site, uncovered in Turkey in 1993, contained what archaeologists believed were the remains of more than 60 gladiators. Kanz and his group confirmed this was a grave for gladiators on the basis of the skeletons’ patterns of injury. For example, some of the individuals had clearly been wounded with a trident.

Using inductively coupled plasma atomic emission spectroscopy, the team also studied the gladiators’ diet by examining trace elements in the skeletons’ bones. The forensic scientists found an unusually high strontium-to-calcium ratio in the remains, compared with those of regular Roman citizens found in a cemetery nearby.

Organisms lower in the food chain typically retain more strontium, Kanz says, so he and his team concluded that the gladiators probably ingested copious amounts of plant matter. Their finding is bolstered by a passage in Pliny the Elder’s 2,000-year-old tome Naturalis Historia indicating that gladiators used a beverage made of stove ash to heal after combat.

Luciano Arruda has a bridge he’d like to sell you. No really. He’s got a good-as-new pedestrian bridge, and it’s for sale.

Arruda works for Silicon Valley Disposition, a company that helps businesses sell off high-tech equipment and other assets. Recently, he was touring a Foster City, Calif., building owned by Thermo Fisher Scientific, getting an idea of the inventory to be sold, when the plant manager tapped him on the shoulder. The man said, “There’s one more asset you need to sell—I’ll have to bring you outside to show you,” Arruda recalls. 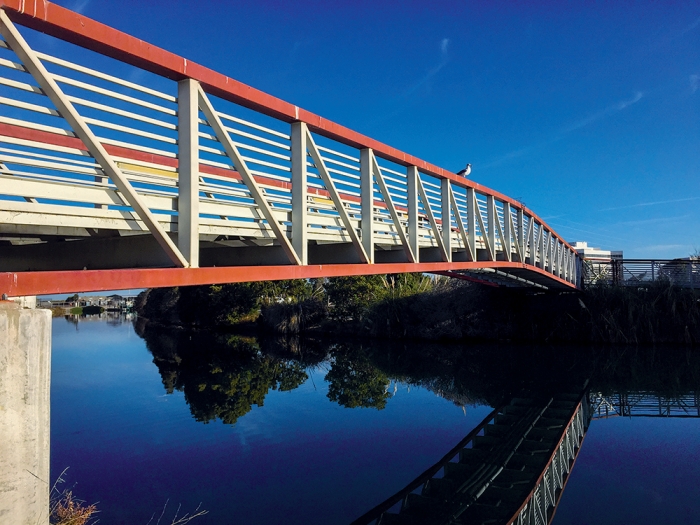 Once outdoors, rather than pointing to a run-of-the-mill generator, the plant manager gestured toward a 440-foot-long, 10-foot-wide bridge crossing a drainage canal.

The bridge, dubbed “The Bridge to Success” and erected in 1998, originally connected two regions of a rapidly expanding industrial complex owned by Applied Biosystems, maker of the DNA-sequencing instruments used by the Human Genome Project.

This is definitely the first time Silicon Valley Disposition’s been asked to sell a bridge, Arruda concedes. But he doesn’t see it as anything out of the ordinary. He sees it as just another test of the company’s business model to find buyers for unique assets.

Nine parties have come forward and expressed interest so far, Arruda says. But two of them—towns that have need of a bridge—are the lead contenders.

The next test of Arruda’s business model? “I’m somewhat involved in selling 10,000 trees for a landscaping company in the desert,” he says.

Mergers & Acquisitions
With the majors knocking, independent analytical labs face the temptation to sell
Art & Artifacts
Chemical clue suggests spurned account of Indian yellow’s origins might be right after all
Education
Fossil-Infused Beer, 75 Million-Year-Old Turtle Bones
Share X
To send an e-mail to multiple recipients, separate e-mail addresses with a comma, semicolon, or both.
Title: The Gladiator Diet, Bridge For Sale
Author: Lauren K. Wolf
Chemical & Engineering News will not share your email address with any other person or company.