The race is on for a reliable, low-cost test that can rapidly detect whether a person is infected with the Ebola virus. Ideally, such a test could be performed where patients are being treated for Ebola, or in airports where passengers are being screened, using only a drop of blood, saliva, or urine.

The current gold standard for confirming that a person has contracted Ebola is reverse transcriptase polymerase chain reaction, or RT-PCR. The method, which involves amplifying and detecting viral nucleic acid material, requires a full test tube of blood and costs about $100 per sample. Results can be confirmed in two to six hours once a sample arrives at a laboratory, but in West Africa, where the Ebola outbreak is centered, it can take several days for samples to reach those labs.

TEMPORARY LAB
[+]Enlarge
Credit: CDC
U.S. government agencies and global partners are working to increase the number of mobile laboratories, such as this one in Liberia, to test specimens for Ebola. 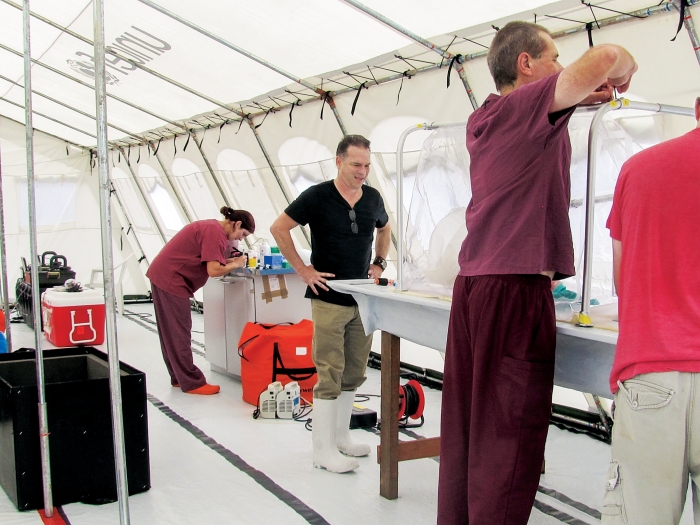 Credit: CDC
U.S. government agencies and global partners are working to increase the number of mobile laboratories, such as this one in Liberia, to test specimens for Ebola.

Since October, the U.S. Food & Drug Administration has authorized the emergency use of six diagnostics for Ebola, all of which rely on RT-PCR. Although RT-PCR is accurate when performed by skilled technicians on sophisticated machines, it is not well suited for use in countries where laboratories are few and far between.

A faster, easier-to-use diagnostic test is critical to containing the current Ebola outbreak, according to the World Health Organization (WHO), the public health arm of the United Nations. Such tests are needed to confirm suspected cases, guide clinical decisions, aid contact tracing, and facilitate early detection of new cases, WHO says.

Companies showed little interest in developing Ebola diagnostics before the current crisis in West Africa because demand for them was scant. But recent efforts by WHO, the U.S. Agency for International Development (USAID), and other government entities around the world have stimulated a flurry of innovative ideas for getting rapid, sensitive, and simple Ebola tests into West African countries—within months instead of the years it usually takes to get a medical diagnostic approved.

For its part, WHO released in October a detailed profile of what its officials think would make an “ideal” diagnostic. Examples of sought-after characteristics include having one or two steps, producing results in fewer than 30 minutes, and having no biosafety requirements beyond personal protective equipment. WHO is also inviting manufacturers to submit new Ebola diagnostics for review through an emergency mechanism that accelerates the review process.

As of mid-November, WHO had received 17 applications from diagnostics companies hoping to get their Ebola test kits cleared for use by UN agencies in West Africa. Of those tests, 13 are based on RT-PCR. The remaining four are rapid diagnostics that rely on antigen detection and can produce results within minutes from just a finger prick’s aliquot of blood.

Experts from Australia, Belgium, Germany, and the Netherlands are currently reviewing the 17 diagnostics for safety, quality, and performance. WHO says it hopes to get some of them into West Africa within the next few months. The organization will gather additional input from experts on the innovative diagnostics at a meeting later this month in Geneva.

Meanwhile, USAID and the White House Office of Science & Technology Policy also launched an initiative in October to produce better tools for fighting Ebola, including improved diagnostics. That effort relies on crowdsourcing ideas on an open innovation platform where anyone in the world with access to the Internet can collaborate and comment on solutions to the Ebola crisis.

By mid-November, the open platform had received more than 1,250 responses. Providers of the strongest ideas were invited to submit proposals to USAID for funding. The agency held a “pitch” day before a committee of experts last month to evaluate the best proposals. Some of the winning technologies may be in the field within months, according to testimony presented by USAID Administrator Rajiv Shah at a congressional hearing in mid-November.

Government efforts, as well as heightened awareness of the situation in West Africa, have prompted numerous companies to begin working on rapid Ebola tests that rely on antigen detection. It remains to be seen, however, whether such tests will be finalized in time to make a difference in the current outbreak.

One of the tests is being developed by Corgenix Medical and members of an academic-industry partnership called the Viral Hemorrhagic Fever Consortium and led by Tulane University. Earlier this year, the group began developing the test, which relies on antibodies that bind to proteins of the Ebola virus. The work is being supported by a three-year, $2.9 million grant from the National Institutes of Health. Corgenix hopes the test will be able to detect Ebola from a drop of blood on a test strip in about 15 minutes.

The company emphasizes, however, that the test has not been finalized. “This is a new three-year project, building off work commenced in 2010. We do not currently have an Ebola test, nor will we likely have a final one in the near future,” Corgenix CEO Douglass T. Simpson said in response to inaccurate media reports in August that the company’s device was nearly ready for prime time.

Corgenix and other companies say they are doing everything they can to get a reliable and rapid diagnostic kit for Ebola into West Africa. Although such tests may not be available in time for the current outbreak, company officials are hopeful that they will be ready for the next one.