Materials: Technique could enable the fabrication of components for batteries or even tissue scaffolds 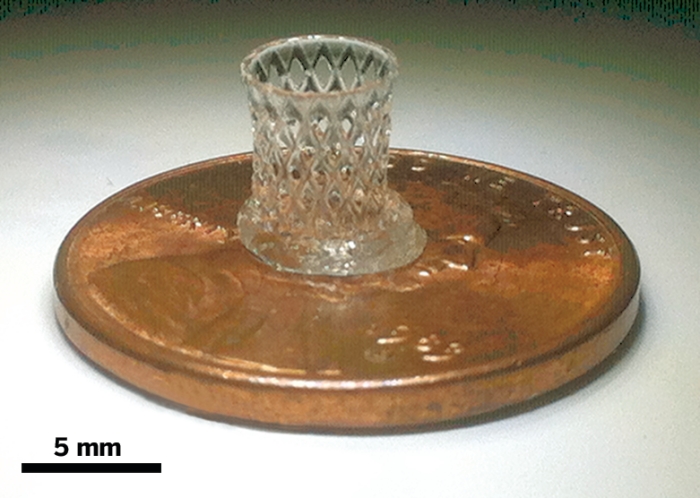 Three-dimensional printing may revolutionize how industries, such as aerospace and even fashion, create products. So scientists have tried to move beyond simple plastics and metals and expand the range of materials used by this type of manufacturing. Now a group has printed 3-D objects from a conductive polymer made with an ionic liquid (ACS Macro Lett. 2014, DOI: 10.1021/mz5006316).

The new technique is both “cool” and important, says Joseph M. DeSimone, a chemical engineer at the University of North Carolina, Chapel Hill. “I think this particular class of materials will trigger many ideas in a whole host of applications.” For example, with these materials, 3-D printers could someday build ion-conducting membranes for batteries and fuel cells, electromechanical actuators, or scaffolds for growing cells.

In the new study, chemist Timothy E. Long, mechanical engineer Christopher B. Williams, and coworkers at Virginia Tech built millimeter-sized objects with the ionic liquid 4-vinylbenzyl trioctyl phosphonium bis(trifluoromethanesulfonate)imide. They mixed it with a diacrylic monomer, such as 1,4-butanediol diacrylate or poly(ethylene glycol) dimethacrylate, both of which can be cured by ultraviolet light. When hit with light, the diacrylic monomers and phosphonium ions in the ionic liquid form cross-linked polymer networks.

The researchers used stereolithography to create their 3-D printed objects, initially exposing a layer of the ionic liquid mixture to UV light in a pattern determined by a computer-aided design system. They then repeated this process, adding another coating of the mixture and shining light on it, to build their desired object layer by layer.

The objects the team printed had features as small as 25 µm, making them ideal for tissue scaffolds. Because of the material’s conductivity, such a polymer framework could grow human cells for generating skin or bone grafts.

Long believes this is the first example of a 3-D printed ionic liquid. Although the researchers didn’t create any functional devices, they did test the conductivity of their objects and found that the cured polymer retained the conductive properties of the ionic liquid.

Other researchers have worked with polymer ionic liquids outside of 3-D printing, but those fluids were nitrogen based, containing ammonium or imidazolium ions. Phosphonium ionic liquids, which have only recently become widely available, have higher thermal stability, remaining intact up to at least 300 °C, compared with 200 °C for ammonium ionic liquids. Higher stability is important in industries with high-temperature needs, such as aerospace. Even if 3-D printed devices don’t have to survive those temperatures, their enhanced stability means they’ll last longer at lower operating temperatures.

Long’s team plans to explore variations of the phosphonium ionic liquid material, trying different cross-linking monomers or charge concentrations. These variations could change characteristics of the printed materials such as mechanical and conductive properties.

Polymers
Hydrogel stays strong and flexible even at freezing temperatures
Materials
Ionic liquid gel gives supercapacitors a boost
Materials
A flaky solution for improving coverage of 2-D materials
Share X
To send an e-mail to multiple recipients, separate e-mail addresses with a comma, semicolon, or both.
Title: Engineers Combine 3-D Printing With Ionic Liquids To Make Conductive Materials
Author: Neil Savage
Chemical & Engineering News will not share your email address with any other person or company.