Confusion Over Scientific Nomenclature Is Par For The Chemistry Course

Every disagreement is different, but they all can be teaching and learning exercises

Find out how well you know your chemistry terminology with our quiz at http://cenm.ag/words.

Graduate students with Brent L. Iverson on their thesis committees know better than to mention “π-stacking” during their candidacy exam. Department lore makes clear that the University of Texas, Austin, chemist will grill anyone who dares invoke the term. “I always ask, ‘What do you mean by that?’ ” Iverson says, which inevitably leads to a heated back-and-forth. Iverson wins every time, though, because “the student realizes that they’ve been making assumptions that they shouldn’t,” he says. 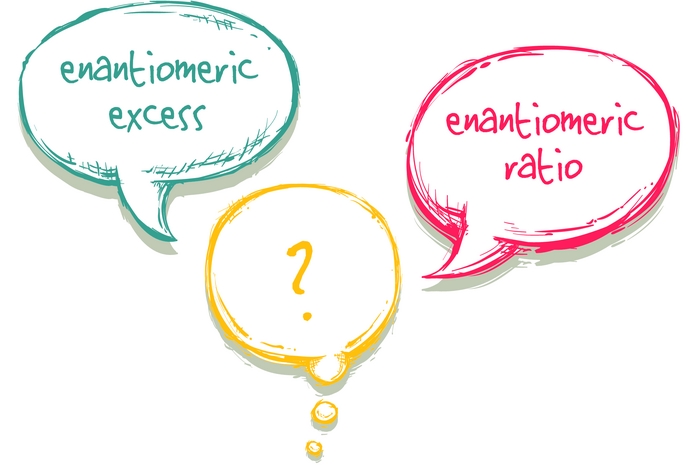 When it comes to the debates, friendly or otherwise, that chemists have over nomenclature, no two are exactly alike. Yet they can be classified to an extent (see box “You Say Tomato …”). According to Jay A. Labinger, an organotransition metal chemist at California Institute of Technology who conducts research on the culture of science, terminology confusion comes in a few different flavors. No matter the flavor, these verbal fisticuffs can be valuable teaching and learning exercises.

In some cases, researchers use multiple words that mean different things interchangeably. Different camps advocate using different terms for the same chemical entity. Sometimes, the debate is not about what terms mean but about which is more useful or appropriate for the scientific community. And sometimes chemists and students use terms colloquially in ways that are misleading.

π-Stacking falls squarely into the latter category, Iverson says. “The problem with π-stacking as a term is that students read into it,” assuming it invokes a chemical interaction between the π-electron clouds of aromatic rings, Iverson explains. Physical organic chemists have found no basis for such an interaction, with the possible exception of very large aromatic ring systems (Chem. Sci. 2012, DOI: 10.1039/c2sc20045g). The word “π-stacking” simply describes a geometric arrangement aromatic rings can take in certain circumstances. “The confusion comes when students infer that π-clouds must be squishy and polarizable enough to stick together,” he says. In the majority of cases “that is just not true.” 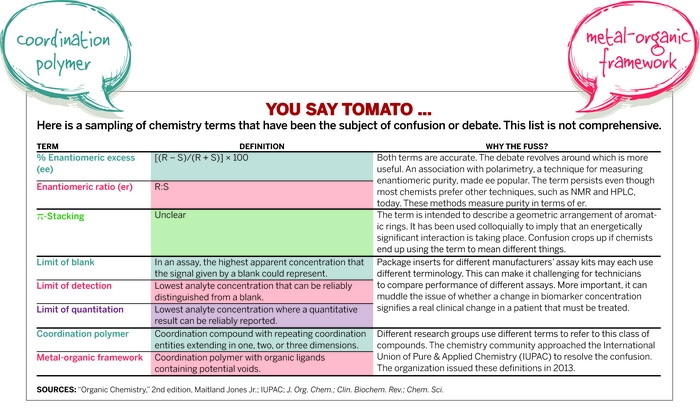 Here is a sampling of chemistry terms that have been the subject of confusion or debate. This list is not comprehensive.

Bruce C. Gibb claims he’s seen the term “hydrophobic interaction” similarly misused to describe what happens when non-water-soluble parts of biomolecules aggregate in water. Like π-stacking, people sometimes use the phrase to invoke a force, in this case a “hydrophobic force,” says Gibb, a supramolecular chemist at Tulane University. In reality, he says, hydrophobic interactions are spatial arrangements. No special hydrophobic force drives these arrangements. They result from a phenomenon chemists call the hydrophobic effect, which is driven by electrostatic (hydrogen bonding) and dispersive (van der Waals) forces that affect all sorts of molecular interactions.

At times the debate isn’t pretty, as Jeffrey Aubé has observed. The University of Kansas, Lawrence, chemist is a former student of the late University of Arkansas, Fayetteville, chemist Robert E. Gawley, a prominent er advocate (J. Org. Chem. 2006, DOI: 10.1021/jo052554w). At meetings, Aubé always presents his team’s results in terms of er. The criticism he hears is that chemists use er to exaggerate their products’ purity. An er of 95:5 is equivalent to a 90% ee, for instance, but the higher number sounds better.

Fans of er aren’t trying to game the system, and chemists who continue to use ee have good reasons for doing so, says Tehshik P. Yoon, an organic chemist at the University of Wisconsin, Madison. Chemists have been reporting ee’s since at least the 1970s, he says. “Being part of that intellectual tradition is important to me, so I continue to report ee’s,” he adds. It’s possible to interconvert the terms, a task he considers neither time-consuming nor difficult. What’s more, he explains, colligative properties of chiral molecules tend to track with ee. For instance, the maximum yield of enantiopure compound chemists can get from a recrystallization is typically the ee of the material, Yoon says. “I don’t really see why the difference between ee and er is a big deal.”

Having multiple words to describe chiral purity is not a life-or-death situation for organic chemistry. Researchers who design and run clinical chemistry assays, however, have important reasons to standardize their vocabulary. David A. Armbruster, director of global scientific affairs at Abbott Diagnostics, wants to ensure that when clinical chemists talk about an assay’s sensitivity, everyone is on the same page.

Things get complicated, for instance, when a scientist delves into an assay’s analytical sensitivity and learns that different companies describe the sensitivity of their assay products in different ways, Armbruster says. For instance, the terms “limit of blank,” “limit of detection,” and “limit of quantitation” are all interrelated. But they are not necessarily synonymous (see box).

For many of the molecules clinical labs monitor, such as cholesterol, glucose, or creatinine, what happens at the very limits of assay detection is unimportant. That can change in a biomarker research setting. Suppose a patient is tested for a biomarker with two different assays at two different hospitals, Armbruster posits. If the patient’s analyte concentration increases, does that discrepancy call for a change in a patient’s care, or is it an expected variation in assay data? At that point, it becomes important to know tests’ limits of blank, detection, and quantitation. Armbruster put forward definitions of those terms in a 2008 report (Clin. Biochem. Rev.,29, S49).

Many times, individuals’ efforts aren’t enough to standardize a field’s lexicon. That’s when the community calls for the nomenclature experts at the International Union of Pure & Applied Chemistry (IUPAC). For example, the organization recently issued recommendations in a case for inorganic materials chemistry.

By the early 2000s, chemists had become confused about what to call a certain type of repeating, multidimensional structure that can accept guest molecules, recalls Lars Öhrström, a coordination chemist at Chalmers University of Technology, in Sweden, who chaired IUPAC’s working group on the matter (Pure Appl. Chem. 2013, DOI: 10.1351/pac-rec-12-11-20). The spat was between the words “coordination polymer” and “metal-organic framework,” he says. “There were two fairly small communities with fairly strong views, and a large majority of scientists in the middle who simply wanted to know what they should call such structures,” Öhrström says.

IUPAC’s task group sought input from all stakeholders and, after public comment and peer review, published recommendations in 2013 (see box). But Öhrström cautions that new guidelines alone don’t make confusion disappear, nor is there any guarantee that guidelines will be followed uniformly.

“Language is a living beast,” says Shawn C. Burdette, a chemist at Worcester Polytechnic Institute. Words that catch on do so “whether a governing body wants them to or not,” he adds. Burdette and Brett F. Thornton, a postdoctoral researcher at Sweden’s Stockholm University, have published perspectives and letters urging IUPAC to clarify how it wants new elements to be named (Nat. Chem. 2013, DOI: 10.1038/nchem.1610). The organization’s 2002 guideline included a new requirement that all new element names should end with the suffix “-ium,” as does element 116, livermorium. Burdette and Thornton think the names should take into account elements’ properties and places within the periodic table; for instance, all halogen elements end in “-ine.”

“I’m a person who likes consistency,” Burdette says. Retaining a pattern to periodic table nomenclature may have a positive effect on chemistry teaching, where students can associate similar names with similar properties.

IUPAC encourages chemists to propose terminology topics that need addressing, Öhrström says. Even with IUPAC, though, it’s impossible to create a perfect system of words, he cautions. Making definitions too restrictive makes them less adaptable to future discoveries and trends, Öhrström points out. “You have to leave things a little messy at the edges,” he says.

Expression messiness, it seems, is an inevitable part of doing chemistry. While individual conflicts may clear up, others will take their place.

Labinger thinks chemists should embrace the mess as an educational and cognitive tool. “The language you use to talk about something influences the way you think about it,” he says. “If the chemistry you’re talking about is truly something new, then a fight over terminology may be quite an important part of getting to understand that chemistry better,” he says.

That viewpoint would be familiar to one of the fathers of modern chemistry. Antoine Lavoisier wrote something very similar in “Elements of Chemistry,” his now-classic tome from 1789: “As ideas are preserved and communicated by means of words, it necessarily follows that we cannot improve the language of any science without at the same time improving the science itself.”

Origins Of Life
New evidence against a popular theory about life’s preference for chirality
Environment
Teaching IUPAC recommendations
Education
The Importance Of Being Ignorant
Share X
To send an e-mail to multiple recipients, separate e-mail addresses with a comma, semicolon, or both.
Title: Confusion Over Scientific Nomenclature Is Par For The Chemistry Course
Author: Carmen Drahl
Chemical & Engineering News will not share your email address with any other person or company.