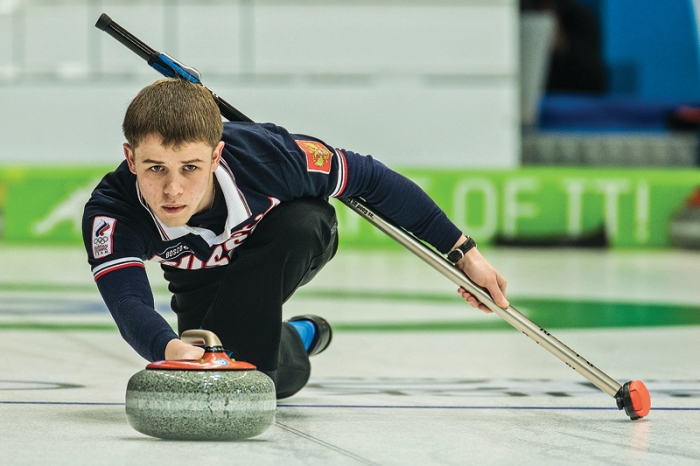 Rick Olson got his first taste of curling at the age of five when his father, charged with an evening of child care, took the Olson kids to the local curling club. Olson remembers the spot as cold, dark, and full of silly guys whacking brooms against the ice.

In the past few years, however, Olson, a mechanical engineer with Battelle, has become something of a curling enthusiast. As part of the curling club in Columbus, Ohio, he regularly slides 44-lb stones across the ice.

An engineer to the core, Olson has also been learning about the science behind curling, which he’ll be lecturing on at Battelle this week to mark the Winter Olympic Games in Sochi, Russia.

Understanding the pressure-temperature phase diagram for water, he says, is critical to understanding chemistry’s role in the sport. “Curling is played in a very unique spot on that diagram,” Olson says. “You are perilously close to being in the regime of water, but you’re still in the regime of ice.”

The icy sweet spot is at −4.5 °C, Olson says. Just half a degree warmer or colder, and play deteriorates. If you’re too close to water on the phase diagram, he explains, the friction between the stone and the ice goes up dramatically. If you’re too far into the ice portion of the diagram, the stones won’t take a curved trajectory, or, in the parlance of the game, curl.

Olson says he’ll be watching the ice quality in Sochi with some envy. “An average curler like me doesn’t often get to play on ice that good,” he says. Club curling also differs from Olympic play in terms of the stakes, Olson notes. “We curl for two hours, and then we drink beer for two more hours with the same guys we just played against. The winners buy the first round, so our motto is, ‘What’s the worst that could happen? They buy the beer.’ ”

If you notice that Team USA’s luge sled is a little speedier in Sochi, it might just be because of some materials science. The folks at USA Luge teamed up with Dow to create better kuffens through chemistry. Kuffens are the curved bits of the sled that hold the pod, where the athlete rests, to the steel blades that contact the ice. 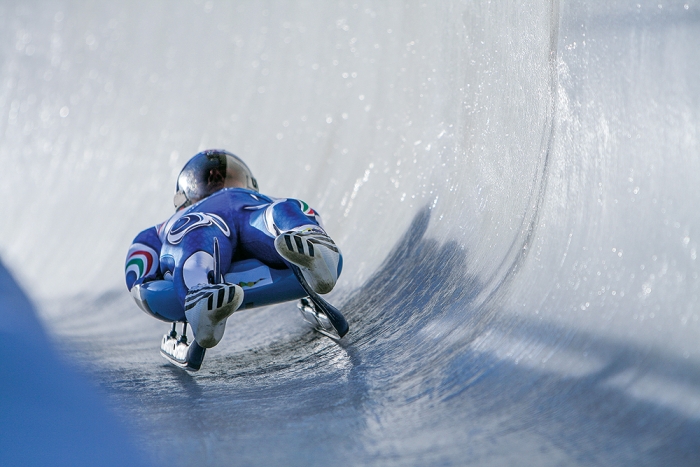 The kuffens that USA Luge used previously were handmade out of laminated wood with a fiberglass wrapping. Dow Chemical thought they could do better both in terms of materials and manufacturing.

“When we started working with USA Luge to identify what makes a successful kuffen, we didn’t know exactly what we wanted to engineer into it,” says Scott Burr, a Dow researcher who worked on the project. Although the ultimate goal is simply to go faster, some of the things the firm had to take into consideration were friction, the vibration of the sled as it whizzes down the track, aerodynamics, and the steering ability of the athlete.

“What we’re using now is a mixture of different materials,” says Jay Tudor, another researcher on the Dow team. Although he’s pretty secretive about precisely what those materials are, Tudor says the new kuffens contain a polymer composite and a carbon fiber composite. The researchers also say they used three-dimensional printing in the kuffen-making process.

Ultimately, Burr says, the new-and-improved kuffens don’t trump the athletes’ abilities. “If a technical solution makes a huge difference in the course of a run, it accounts for maybe 20- to 30-thousandths of a second,” he says. “If the sliders don’t point their toes or they lift their head in a corner, it means a tenth of a second.”

Materials
BASF, partner rethink the bicycle seat
Polymers
What's in baseballs, and can materials explain a spike in scoring?
Materials
Covestro’s on the (soccer) ball
Share X
To send an e-mail to multiple recipients, separate e-mail addresses with a comma, semicolon, or both.
Title: Curling Chemistry, Speed For Sliders
Author: Bethany Halford
Chemical & Engineering News will not share your email address with any other person or company.