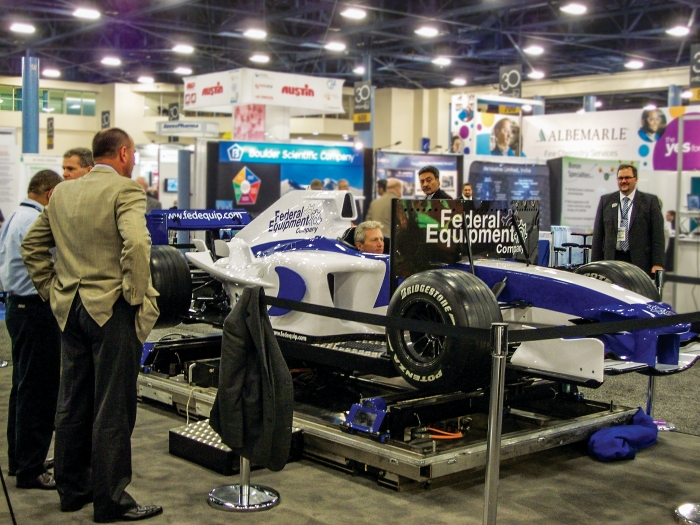 Like the racing simulator that one intrepid company set up, the engines of industry were humming at Informex USA, the annual fine and custom chemicals trade show that was held in Miami Beach last month. Although foot traffic among the exhibit booths was slow, many fine chemicals suppliers were upbeat about business and came to the event sporting capacity and technology expansions.

With a positive view of the coming year, contract manufacturers are investing, according to Kevin Bottomley, managing director of the London-based consulting firm Results Healthcare. Companies would like to buy facilities, such as the abundant former pharmaceutical plants on the market. But they haven’t been finding what they need.

“What is coming out of pharma doesn’t always make sense from a fit and financial perspective,” Bottomley said. “There are specializations where people simply are not finding enough capacity, and now the only alternative is to build it.” Among the needed specialties are filling facilities for sterile products and containment facilities for handling highly potent compounds.

Although the construction activity so far has been largely in Europe, “everybody I speak with wants facilities in the U.S.,” Bottomley added. Beyond a desire to be near customers in a major market, having capabilities in the U.S. is positive now from both cost and supply security perspectives.

Looking forward to a strong 2014, France’s Isochem has its eye out for growth opportunities, said Xavier Jeanjean, vice president for sales and commercial development. With cash on hand and no debt, the company is in a good position to make acquisitions that add to its 2012 purchase of Wychem, a British maker of pharmaceutical intermediates. “We are looking to grow in Western Europe,” Jeanjean said. But the U.S. is an option as well. “It depends on where the opportunity is.”

During the week at Informex, Isochem landed a five-year, $18 million contract to make a catalyst for a high-performance polymer. Jeanjean said the company will build a $2 million plant at its facility in Pont-de-Claix, France, to support the project. He called the contract an important boost, given that Isochem’s nonpharma fine chemicals business has been lagging. 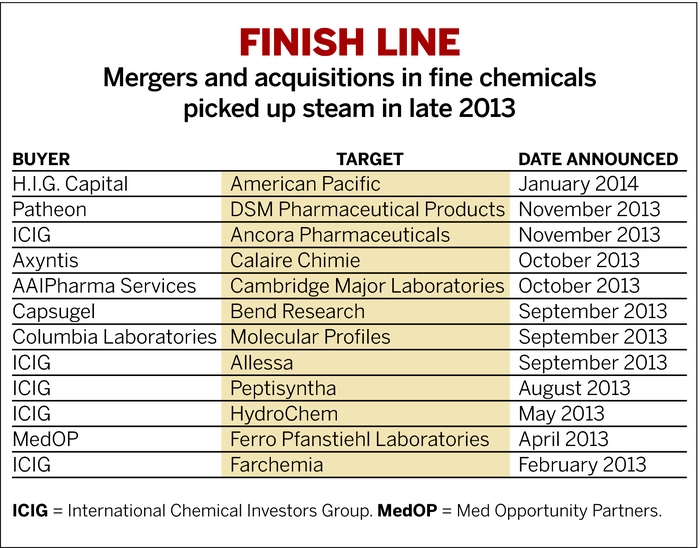 The company is seeking a buyer for its Framochem phosgenation facility in Hungary, according to Jeanjean. Isochem will continue to carry out phosgene chemistry in Pont-de-Claix, which serves the agrochemicals market, and at its plant in Vert-le-Petit, where production meets current Good Manufacturing Practices (cGMP) for active pharmaceutical ingredients (APIs).

Expansion in North America is also on the minds of executives at Holding FIS, the parent of Italian API producer Fabbrica Italiana Sintetici and Canada’s Delmar Chemicals. In Canada, the firm is spending about $20 million to add a kilogram-scale lab, a pilot-plant reactor, and large-volume production capacity, according to Massimo Barcaro, a Holding FIS board member. More R&D capability is planned as well. The goal is to establish infrastructure in North America comparable to what FIS has in Montecchio, Italy, Barcaro said.

FIS is also breaking ground on a new production building in Montecchio. It is already one of the largest contract manufacturing sites in the world, with more than 2,000 m3 of cGMP capacity, according to Stephen N. DeSalvo, director for U.S. contract manufacturing. When completed in 2015, the expansion will add suites for spray drying, sterile product filling, and highly potent API manufacture.

Also in Italy, Zambon Chemicals is adding a small- to medium-scale plant by mid-2014, said Elena Kolaxidis, who leads custom synthesis business development for the company. It will allow for spray drying of 1- to 50-kg batches, which can add up to a few metric tons per year of dry product. She noted that the company also wants to add another spray dryer that can handle batch sizes up to 1,000 kg.

Meanwhile, Navin Fluorine, which commissioned its first cGMP plant in India in 2011, is spending $20 million to expand capacity by about five times to between 15 and 20 metric tons. “We are making this investment proactively,” explained Jordi Robinson, global head of technical business development. “If we are going to stay in this business, we need genuine gram and multiton manufacturing capability.”

A fluorine chemistry specialist, Navin was formed in 1967 to manufacture refrigerant gases. In recent years, the company has built an organofluorine specialty and fine chemicals operation. Navin added contract research and small-scale manufacturing capability with the 2011 acquisition of U.K.-based Manchester Organics, Robinson said.

On another front, Albemarle has budgeted $4 million to add development-scale manufacturing to its South Haven, Mich., facility, which is currently used for clinical- and commercial-scale production. Most of the money will go to its kilolab, with a fourfold increase in capacity coming on-line in the second quarter, Global Business Manager Kurt Hoeprich said.

Yet another kilolab expansion is under way at Uetikon, which will triple capacity by adding a reactor at its Lahr, Germany, headquarters, said Chief Executive Officer Stefan Peterli. In the meantime, the company has lengthened its work shifts to meet growing demand from pharmaceutical customers. According to Peterli, Uetikon is coming off its fourth “good year” in pharmaceuticals, and it is looking for other opportunities to expand.

Among other developments, Chiral Quest’s 2012 purchase of Jiang Xi Long Life Biopharmaceutical brought with it a plant for making drug intermediates. Chiral Quest has since invested $23 million at the site to double capacity and install its core chiral chemistry. The firm aims to get cGMP certification soon after completing the expansion in April, said Ian Lennon, senior vice president for global business development.

“Long Life was already manufacturing before the acquisition, but none of it was chiral compounds,” Lennon explained. The expansion and upgrade will allow Chiral Quest to make chiral APIs and intermediates, such as α-amino acids, that are in high demand. The company supplies intermediates to Western contract manufacturers, including Lonza and Cambridge Major Laboratories.

Switzerland’s Dottikon Exclusive Synthesis, known as a hazardous reaction specialist, is adding chiral chemistry as well. “In today’s pharma pipeline, 30 to 50% of all APIs are chiral, and 20% of those are α-amino acids,” noted Ivo Hubacek, technologies development director. He said the company is using its hazardous reaction capabilities to make a range of these building blocks as catalog and custom products.

Along with capacity and technology expansions, recent mergers have been a source of growth for contract manufacturers. AAIPharma Services and Cambridge Major had a big presence at Informex in their newly merged form and boasted a comprehensive offering from early-stage development through formulation. Similarly, the combination of DSM Pharmaceutical Products and formulation specialist Patheon is heading toward completion in the first half of this year.

Private equity investments in pharmaceuticals are moving at a rapid pace as well. “There are millions of dollars on the sidelines waiting to be invested,” said Ampac Fine Chemicals President Aslam Malik, “and pharma is the place to go.” A week before Informex, AFC’s parent, American Pacific, announced that H.I.G. Capital would acquire it for nearly $400 million. The major impact of the deal will be to take the publicly traded firm private.

Although mergers and acquisitions are starting to happen, many fine chemicals suppliers argue that further consolidation is needed. “People talk about it, but the execution seems to be the issue,” Results Healthcare’s Bottomley remarked.

Still, some fragmentation makes sense because the fine chemicals industry mirrors customers with a range of sizes and needs. “There will be big contract manufacturers that will support big pharma, but there will also be room for more specialized players,” Bottomley explained. “Technology changes, and new suppliers will be needed to access innovation.”

According to Edward S. Price, president of PCI Synthesis, a midsized custom chemicals firm in Newburyport, Mass., the challenge for suppliers “is not technical or regulatory but understanding each individual customer and tailoring what you do to their needs.” Navigating this landscape requires flexibility to adapt. “The bigger an organization grows, the harder it is to do that,” Price added.

Although the players and markets continually shift, what has not changed is that suppliers and customers depend on maintaining relationships, forging new ones, and networking to make deals. For these reasons, venues such as Informex, which began 30 years ago as a small, tabletop exhibition, remain viable tracks for revving up business.

With reporting by Rick Mullin