[+]Enlarge
Credit: Lisa Hechesky/REUTERS/Newscom
Federal and state lawmakers are looking at legislation to prevent situations like the one in West Virginia last month that forced 300,000 residents to use bottled water. 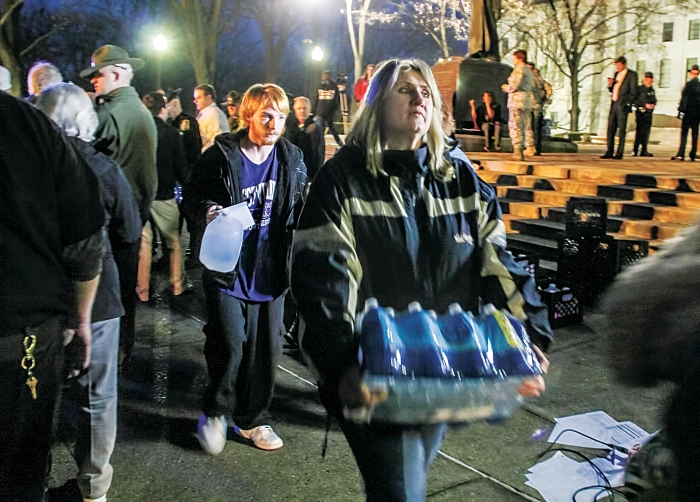 Credit: Lisa Hechesky/REUTERS/Newscom
Federal and state lawmakers are looking at legislation to prevent situations like the one in West Virginia last month that forced 300,000 residents to use bottled water.

Congress is considering legislation to improve the safety of aboveground chemical storage tanks that are located near public drinking-water supplies.

This comes after 10,000 gal of crude 4-methylcyclohexanemethanol, or MCHM, leaked from a tank in Charleston, W.Va., into a river in January. The chemical entered the state’s largest water supply system less than 2 miles downstream from the leak. As a result, 300,000 residents in the Charleston vicinity were left for days without access to clean, safe tap water.

Most states, including West Virginia, have no regulations for aboveground storage tanks, Randy C. Huffman, cabinet secretary of the West Virginia Department of Environmental Protection, told the committee. The states that do have regulation, he said, were driven to act by situations like the Charleston leak.

Consequently, the West Virginia Legislature is considering a bill on the safety of aboveground tanks that is similar to one the state passed years ago for underground storage tanks. A preliminary state investigation found some 1,000 above-ground tanks located near public drinking-water sources, Huffman said.

S. 1961 would call for companies to inform the Environmental Protection Agency and state and local water officials about the chemicals they store.

“That information,” Manchin continued, “is only so helpful when we don’t have adequate health and safety data on these chemicals.” This was the case with the Charleston spill as there was initially no readily available toxicity data on MCHM.

Manchin and others at the hearing pushed for the committee to overhaul the Toxic Substances Control Act to require EPA to assess the safety of commercial chemicals. In contrast, Boxer, the committee’s chair, urged the panel simply to move ahead quickly with new aboveground tank legislation.

Also testifying at the hearing was West Virginia Secretary of State Natalie E. Tennant, who laid out the impact of the chemical leak that tainted drinking water in the state’s capital.

“People are fed up. They are angry, and they are scared,” she said. She underscored the community’s confusion when the company and government officials issued contradictory assessments of the leak’s impact as well as the toxicity of the chemical.

Comments
Paul E. Eckler (February 10, 2014 11:18 AM)
As broadcast on CSPAN, the hearings also had representation from the tank farm association, who urged that Congress wait for the results of pending incident investigations before taking action. Most of the proposed rules are in existing regulations, which are apparently poorly enforced. Some loopholes may need closing. They urged updating existing laws rather than a new layer of regulations that raises administrative costs.
Reply »