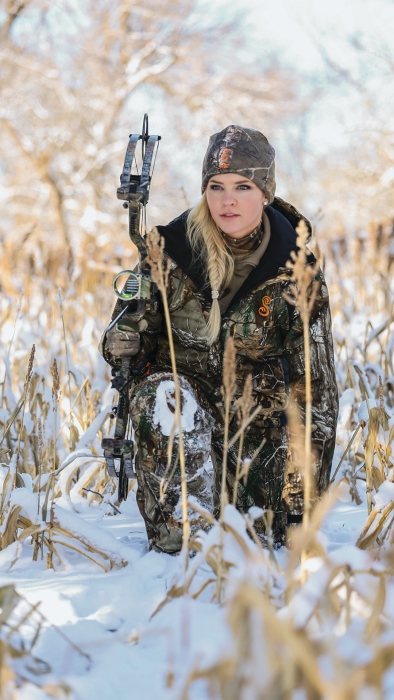 Theresa Vail is one of a kind: a sergeant in the Kansas Army National Guard medical detachment, a self-defined “grease monkey,” an expert M16 marksman, a double chemistry and Chinese major at Kansas State University, and the current holder of the Miss Kansas crown.

Her childhood was spent as an Army brat. She and her eight siblings relocated every few years as her dentist father moved between posts—including one four-year stretch in Germany. She recalls “always being in a different school, always getting to know different people, always having to adapt to new environments.”

She struggled to fit in, she says, and in Germany she was bullied. Her teeth had developed abnormally, and “because I was different, the kids singled me out,” she says. “They were just cruel with their words.” At age 10 she attempted suicide. Her father subsequently made her porcelain crowns, and that helped to turn things around. “I loved the way I looked,” Vail says. “I didn’t let the negative comments affect me anymore.”

Around the same time, she also started taking solace in being outdoors, especially going hunting with her father. Her latest weapon of choice is a bow and arrow. “Archery is so primitive, so challenging,” she says. “It gives me such a feeling of empowerment and independence.”

As a child, Vail hoped to follow in her father’s footsteps and become a dentist. Also like her father, she chose chemistry as a major when she got to college.

“I have always been the one to ask the questions of why and how do things work,” she says. She appreciates that chemistry gives her those insights at an atomic level. She also delights in a challenge and notes that her favorite class so far—organic chemistry—was the class that caused most of the health-career-oriented students to drop out.

As for her Chinese major, she says, “When I was a child, I had this huge obsession with the CIA, and I wanted to be an undercover agent for them in China. When I got to K-State and learned that the school offered it as a major, I said, ‘Absolutely, sign me up!’ ” She hasn’t yet been able to visit China, but she tries to practice with Chinese-born students attending Kansas State’s business school, she says.

Vail’s studies and National Guard service are largely on hold during her year as Miss Kansas, as she travels through her home state and the rest of the U.S. to speak about her chosen platform of empowering young women. “I try to tell them to be fearless and step outside their comfort zone,” Vail says. “I haven’t let anything hold me back. That’s why I think I’m so successful. I haven’t let fear get in the way.”

Vail made news during the Miss America pageant last September when she refused to cover her tattoos—the serenity prayer and a military medical insignia—in the swimsuit competition. Covering the tattoos would have felt hypocritical, she says, when she spends her time encouraging others to break barriers. She won the pageant’s America’s Choice award, based on votes for contestants’ videos on YouTube, and became one of the top 10 finalists.

After her year as Miss Kansas finishes in June, she plans to complete her final year at Kansas State, but she may no longer pursue dentistry. Instead, she may try to be a spokeswoman for an outdoor gear company, she says, and in that position continue to encourage girls and women to break out of conventional roles. Her favorite part of being Miss Kansas has been “the messages I get on a daily basis from younger women saying what an inspiration I am. And I’m just being myself!”