ADRIFT
[+]Enlarge
Credit: DOD/C. Todd Lopez
Tanks aboard the Cape Ray will be used by scientists to help neutralize chemical materials from Syria. 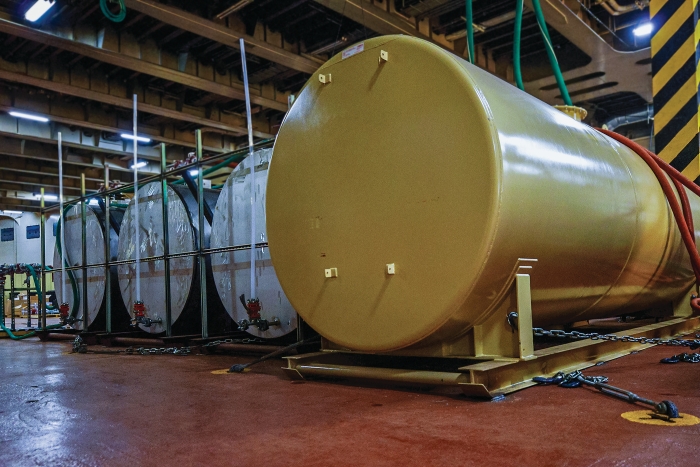 Credit: DOD/C. Todd Lopez
Tanks aboard the Cape Ray will be used by scientists to help neutralize chemical materials from Syria.

An unprecedented mission to destroy Syria’s lethal chemical warfare agents and precursors at sea is set to move into a new phase this month aboard a 22,000-ton U.S. cargo ship. The MV Cape Ray is the centerpiece in the complex international plan to eliminate Syria’s chemical weapons program. Built in 1977, the 648-foot vessel has been used to transport everything from components of oil rigs to military vehicles.

As the Cape Ray departed the Norfolk Naval Shipyard on Jan. 27, Defense Secretary Chuck Hagel hailed the historic mission. “You are about to accomplish something no one has tried,” Hagel told the ship’s crew members. “You will be destroying, at sea, one of the world’s largest stockpiles of chemical weapons and helping make a safer world.”

The destruction process is part of an agreement with the Syrian government to turn over its weapons for destruction by June 30. Under the United Nations-backed plan, the Syrian military is required to transport chemical weapons from 12 storage sites around the country to the northern port of Latakia, where the material is being loaded onto Danish and Norwegian cargo ships for eventual transfer to the Cape Ray. But Syria has delivered only a fraction of its arsenal to the port, possibly endangering the mid-2014 deadline.

On loan to the Navy from the Transportation Department’s Maritime Administration, the ship has been outfitted with two large, portable hydrolysis systems designed to neutralize the deadliest chemical weapons in Syria’s arsenal. 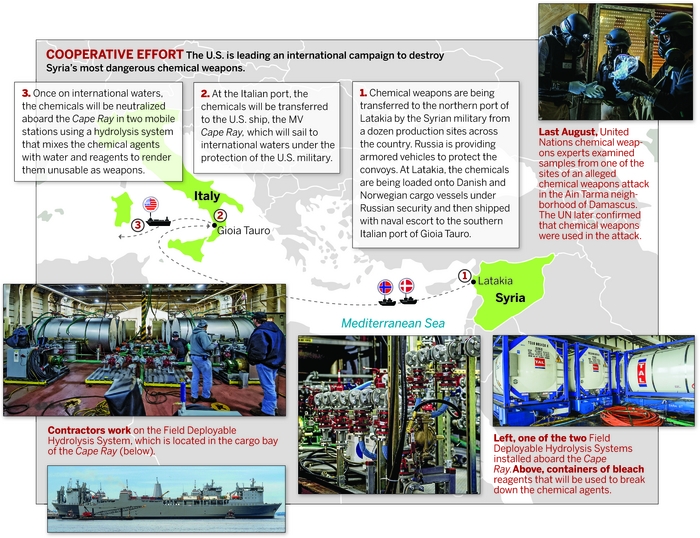 The crew of the Virginia-based Cape Ray includes 63 chemists, engineers, and other specialists from the Army’s Edgewood Chemical Biological Center. The center is located at Aberdeen Proving Ground, Md., and it’s where the mobile hydrolysis units were built.

The U.S. ship is expected to arrive at the Italian port of Gioia Tauro later this month, where it will rendezvous with the other ships. The Cape Ray will take on about 560 metric tons of chemical warfare materials and then head out to international waters in the Mediterranean Sea, where its crew will destroy the weapons. The mission is expected to take 45 to 90 days, depending on the weather and conditions at sea. The Navy will provide security for the ship while it conducts operations.

The U.S. will destroy one chemical agent—about 20 metric tons of liquid sulfur mustard agent—and several precursors to nerve agents. These precursors include methylphosphonyl difluoride, which is mixed with isopropyl alcohol in making sarin, and O-ethyl methylphosphonothioic acid, a component in the manufacture of VX nerve agent.

The Department of Defense began preparing for the mission more than a year ago. On Dec. 27, 2012, a meeting was held at the Pentagon to discuss the concern of dealing with Syria’s arsenal of chemical weapons. “There was a recognition that something was going to happen in Syria,” says Frank Kendall, undersecretary of defense for acquisition, technology, and logistics.

“We could have waited to see what happened and then reacted to that, or we could have moved out ahead of time and then prepared for what might happen or was likely to happen,” he remarks. “Fortunately, we took the latter course.”

By the end of January 2013, specialists at the Edgewood Chemical Biological Center had evaluated existing technology and configurations for neutralization of chemical weapons and recommended using the hydrolysis process.

The technology is not new, and there is no mystery about the process, says Kendall, who oversees the department’s nuclear, chemical, and biological programs. The Army has destroyed its own chemical weapons at various sites in the U.S. for decades using similar technologies.

“We had fixed installations that had hydrolysis units that could do this job,” Kendall says. “But what we did not have was a transportable, field-deployable system.”

Construction of a mobile system began in February 2013, and the first prototype was demonstrated in June. A second was demonstrated in September. The final product, the Field Deployable Hydrolysis System, is designed to deploy worldwide, and it can be shipped in roughly three dozen 20-foot containers.

The system uses heat, water, and reagents such as sodium hydroxide and sodium hypochlorite to turn the chemical weapon components into low-level hazardous waste that can be disposed of commercially. “It brings the chemical agent together with a reagent,” says Robert Malone, an environmental engineer at the Edgewood facility. “It creates a chemical reaction that basically destroys the chemical agent.”

Two Field Deployable Hydrolysis System units have been installed on the Cape Ray’s cavernous main trailer deck inside a sealed tent. Each unit cost about $5 million and contains a titanium-lined reactor for mixing the warfare agents with the chemicals that will neutralize them. Approximately 130 gal of mustard gas can be neutralized at a time, over the course of two hours, says Adam Baker, a chemical engineer at the Edgewood center.

The two units can process as much as 50 metric tons a day of chemical warfare agents. Straight calculation gives 11.2 days for complete destruction. But there is a ramp-up period, Baker cautions. “It’s going to be a slow start. We’re going to go very deliberately and safely.”

Malone, who has 20 years of experience destroying chemical weapons for the U.S., says the operational plan includes a cycle of six days of disposal plus one day for maintenance of the equipment.

The U.S. military, which began destroying its stockpile of chemical weapons in 1990, often handles munitions such as rockets and projectiles that include a casing and explosive as well as the chemical component. “That’s the part that really limits throughput, the de-mating of the explosive from the chemical agent and the body,” Malone says.

But the mission aboard the Cape Ray will be different. Rather than filled artillery shells, liquid chemical agents are being demilitarized. “This can be done fairly quickly because all of the material is in a bulk configuration,” Malone says. “It’s in large vessels, easily accessible, and it gives us a very high throughput.”

Initially, the expectation was that the destruction of Syria’s chemical weapons would happen on land, but that changed. Eradicating the weapons within Syria was viewed as impractical amid the country’s civil war. And the possibility of destroying the material in another country was rejected after Albania, Belgium, and other nations refused to accept the program.

Shipboard destruction of the chemical substances “wasn’t the first thing that came to mind,” Kendall notes. But with no other viable option, U.S. defense officials ultimately determined that the mission could be carried out at sea.

The portable hydrolysis system “can effectively neutralize and destroy all known chemical agents, anywhere on the planet,” says Carmen J. Spencer, the Pentagon’s joint program executive officer for chemical and biological defense. “There are operational advantages to doing it at sea,” Spencer says, citing the fact that when at sea, there is no potential for harm to civilian populations in nearby areas.

Officials stress that no hydrolysis by-products will be released into the water. The hazardous waste that is generated by the neutralization process will be treated to reduce its acidity and then stored in containers aboard the ship. Malone says the “effluent” is similar to other toxic compounds that industrial processes generate.

The Organisation for the Prohibition of Chemical Weapons, the global body overseeing the destruction of Syria’s chemical arsenal, has solicited bids to determine which commercial facilities will receive the waste for disposal. Bids have also been sought from private companies interested in destroying approximately 500 metric tons of less dangerous commodity chemicals from Syria. Although these chemicals have legitimate industrial uses, they must be destroyed because of their association with Syria’s chemical weapons stockpile.

If the international effort to destroy Syria’s arsenal is successful, there will be “one less nation on this planet that will then possess chemical weapons,” Spencer says.

Comments
MB (February 10, 2014 11:40 AM)
Don't trust Syrians on their inventory report, just like Libya's turned out to be under-reported. Would not thermonuclear temperatures satisfactorily eliminate organophosphates ? I guess it would pose some International Treaty complications. Who would notice ?
Reply »

What about Israel and Jordan ?
Reply »