Warm Welcome On A Frigid Day 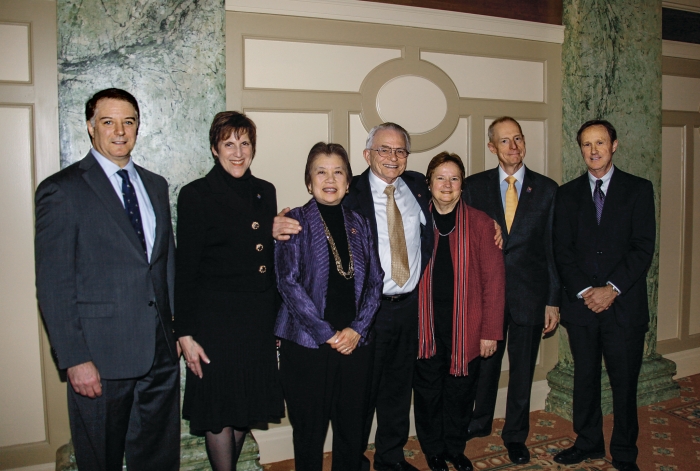 The American Chemical Society welcomed its new officers during a reception on a bitterly cold evening in Washington, D.C. During the Jan. 22 event, ACS governance and key staff members mingled with guests from the Washington science establishment and funding agencies. ACS President Thomas J. Barton spoke about his enthusiasm for his new role and his plans for the year ahead. “I will be focusing on a number of areas including energy, environment, and the public’s view of chemistry,” he said. “I have many passions, perhaps too many,” he added, but he noted that improving the quality of K–12 science education in the U.S. tops his list. Pictured from left are ACS Secretary Flint H. Lewis, ACS Executive Director and CEO Madeleine Jacobs, ACS Immediate Past-President Marinda Li Wu, Barton, ACS President-Elect Diane Grob Schmidt, ACS Board Chair William F. Carroll Jr., and ACS Treasurer Brian A. Bernstein.

Programs
ACS hosts reception for its 2020 officers
Governance
ACS introduces its new officers for 2019
ACS News
ACS welcomes its new officers
Share X
To send an e-mail to multiple recipients, separate e-mail addresses with a comma, semicolon, or both.
Title: Warm Welcome On A Frigid Day
Author: Sophie L. Rovner
Chemical & Engineering News will not share your email address with any other person or company.