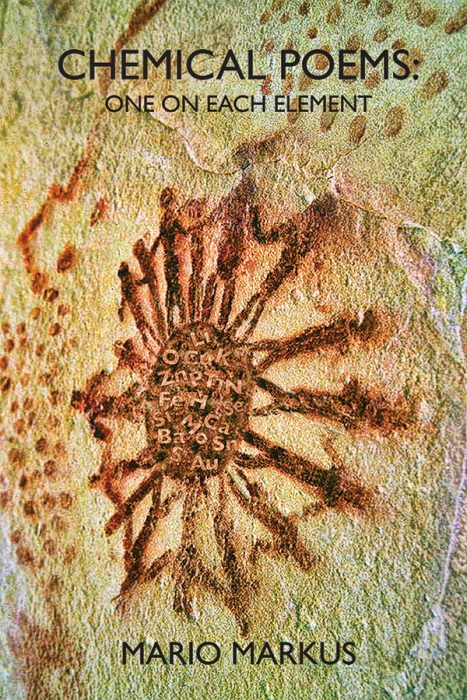 “The one who causes death / gives us / vitamins,” writes Mario Markus in “Osmium,” one of 125 entries in “Chemical Poems: One on Each Element.” This hefty book offers a view of the world through the elements, whose roles in biology and in human history he explores.

Markus is a chemist and professor emeritus at the University of Dortmund, in Germany. Born and raised in Chile, he has published a prior collection of poems in Spanish. The best of the poems in the latest collection reflect his sense of humor and his evident love of chemistry—and, very often, the elements’ dual nature as aid and poison.

Before the poems commence, he offers a brief introduction to the chemistry of the elements, which people familiar with the field will likely skip over but which provides a useful reference for everyone else. He also provides an extensive bibliography and a glossary of terms and ideas from a broad range of disciplines. Each of the 125 poems appears on a page opposite a brief prose passage about the element in question, known or postulated. The device allows Markus to play in the poems with details offered in the prose.

Often the prose pieces serve as troves for the cultural history surrounding an element. These little collections make way for satisfying associative leaps in their accompanying poems. Markus writes of nickel’s role in life-forms during the early history of Earth, and he mentions a present-day plant that accumulates nickel, before he concludes with an allusion to the allergic reaction some people have to the metal: “Sometimes / a painful map appears / of the old poison planet / on the skins of people / adorned / with Nickel.”

A few of the poems play with sound as well as meaning, as in the one for zinc, in which a pleasing falling rhythm emerges:

Hidden essence of pansies, of molds, of hyphae in grasses, branches and roots. Healer of wounds. Warden of smells ...

A similar rhythm—one that hearkens back to the poems of Sappho—is at work in “Polonium”: “Minimum circles / hidden in granite / called up to witness / the Word / of God.” The lines, as the prose passage tells us, refer to a creationist’s suggestion that polonium’s ability to speedily create rings in granite helps disprove geological time. But in the poem the anecdote becomes incantatory. Some poems employ lists to comparable effect, numbering the uses and marvels of the elements in question, like amulets by which we might remember and treasure—or decry, as the case may be—the actual stuff.

The Swedes saw it
at the far end
of stability.
It appeared on the beach,
a cigar with three arms.
The atoms danced in circles
for some minutes
and then vanished.
They called it
Nobelium.

Later, others found it:
Americans and Russians.
They saw it many times.
Strangely,
it did not have
three arms,
but two.
And it remained
for almost an hour.

No one knows
what the Swedes
had seen.
The baptism
swallowed the baptized,
leaving the name of something
that perhaps
no one saw.

Other poems have a choppy feel. Prior to its publication in English, “Chemical Poems” appeared in Spanish and then in German. I wonder whether the line breaks shifted at all in translation, or whether certain of the phrases and enjambments are more successful in another language. In the book’s foreword, philologist Karl Alfons Knauth calls Markus a translator between chemistry and poetry. He is that, but I found myself wishing that he had collaborated more closely, in rendering the poems, with a translator who had similarly remarkable skill in English and in poetic craft. (Although Markus thanks several people for help with English in the book’s acknowledgments, no translator is listed on the cover or title page.)

The best of the more straightforward poems are like Post-it notes the author has used to record his impressions of a thing he knows well and then left for a friend to find. And he knows his audience. I was curious to read the poem on gold and came to it imagining the praise, if with qualification, he might offer that metal. The poem’s ending, which I won’t spoil with an excerpt, is an effective and playful rebuke to such expectations.

Aid and poison: The element perhaps most present in our current awareness for its simultaneous desirability and toll on human and environmental well-being is tantalum, a component of the mineral coltan. Used in the making of cell phones and other electronic devices, coltan is mined, most infamously, in the Democratic Republic of the Congo. Markus’s poem on tantalum, unsurprisingly, treats this issue. What is surprising is the strength of the poems, taken together, in reminding us how many elements have been the loci of similar desire and conflict. Over and over, we hear of metals whose mining has disrupted the lives of indigenous peoples. Many of the examples are familiar, but having them all in one place brings home the complex, often problematic nature of humans’ relation to these elements.

A fair few of the poems have to do with radioactive weapons. Markus decries the making of bombs—reminding us of the irony, for instance, that the radioactive element discovered after the detonation of the first hydrogen bomb in 1952 was named after Einstein, who had by then denounced nuclear weapons. In “Neptunium,” he lists the many colors found in the element’s radioactive salts—which, as the facing prose passage notes, accumulate in commercially produced smoke detectors as a result of the decay of the element americium, used in their manufacture. Of those colorful salts, he asks,

Would you like to have them? Nothing is easier: Buy smoke detectors, the older the better. Like wine they mature. Buy many of them. You will get multicolored salts and, as a bonus, in some years, the bomb.

The social justice issues raised by the elements are nearly eclipsed by the biological ones: Many of the poems mention their stars’ roles in both maladies and treatments. In the poem for lead, Markus enumerates the ways in which, for thousands of years, humans unwittingly poisoned themselves with the metal. What other menace, he wonders, “disguised as a trifle, / is killing us now?”

A few of the entries read like riddles—for instance, the poem for element 121, unbiunium, is as hard to place as that theoretical element itself. And the prose passages, while they serve to illuminate and provide context for the poems, are themselves unique windows on both the elements and the author’s cosmopolitan, and empathetic, view of the world.

For tin, the 50th element, Markus tells of the buttons on Napoleon’s soldiers’ uniforms, the welded seams of the fuel tanks Robert Falcon Scott brought along on his fateful South Pole expedition, and the pipes of a church organ in 19th-century Estonia—all of which, he writes, crumbled in extreme cold. Those familiar with chemistry or industrial engineering will be well aware of tin pest, the phenomenon that might cause such disintegration. Some of these anecdotes themselves may disintegrate under scrutiny—the story of the buttons on Napoleon’s soldiers’ uniforms is likely more tall tale than truth. But in the context of this collection, its cultural significance—its existence in people’s memory—carries as much weight as its nominal veracity.

For those who must endure winters of tin-crumbling cold, “Chemical Poems” will provide a welcome diversion on long nights. It could even be used as a kind of trivia game, the results of which would only improve with the wine Markus mentions in several of the poems (just avoid the stuff that’s tainted with lead).

One of the book’s epigraphs comes from Georg Christoph Lichtenberg: “Those who know nothing but chemistry don’t know that very well either.” It’s a fitting expression of Markus’s sensibility. His thinking extends from chemical origins into corners of human experience and history that many scientists—and many poets, for that matter—leave untouched. If the end result in English leaves a bit of artistry to be desired, the world-spanning nature of the inquiry nonetheless makes this book a pleasure to spend time with.

Anna Lena Phillips is editor of the literary magazine Ecotone. She is based in North Carolina.