A professional nose talks about the future of sensory analysis 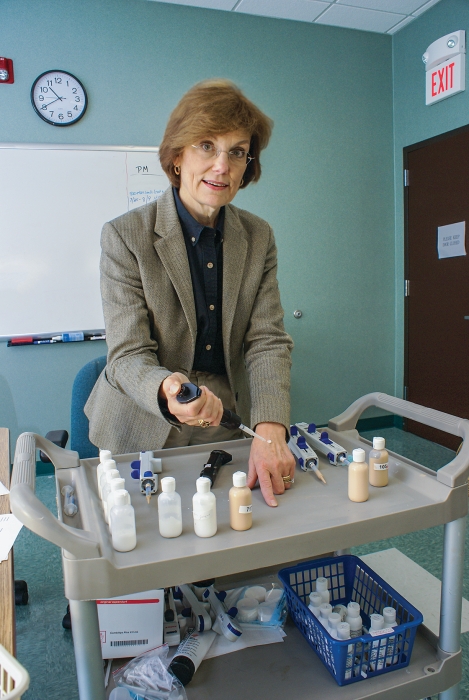 Every culture has its own particular taboos. For instance, when you walk into the office of Gail Vance Civille, president of Sensory Spectrum, it is really not a good idea to be holding a cup of flavored coffee—especially not of the hazelnut variety.

“If you had real hazelnuts in your coffee, I’d be happy for you,” Vance Civille says. Dozens of volatiles contribute to the distinctive odor of real hazelnuts. But hazelnut-flavored coffee? The synthetic scent is “one, two, or maybe three chemicals together to simulate the smell, but it’s not nearly as complex as the real deal. The smell is like a Charlie Brown Christmas tree. Scrawny.”

Vance Civille is a former chemist turned sensory analyst who has spent more than three decades using her nose to identify, critique, or develop descriptive language for a cornucopia of odors, such as those emanating from a glass of sauvignon blanc, a bottle of commercial salad dressing, or even the sweaty armpits of human subjects trying out new deodorants. Her clients range from cosmetic care companies to the food industry.

She’s sniffed the aromas emanating from cat litter trays and diaper pails to assess the relative efficacy of new odor-fighting components. On the day C&EN visited, Vance Civille was splitting her time between advising a test panel evaluating 60 new potential coffee brews from a food industry client and planning a project to develop a lexicon for another company’s suite of whiskeys. Her work also extends beyond odors: Vance Civille analyzes other sensory properties of products, such as the skin-feel of a new hand cream or the sound resulting from use of new motor-muffling technology.

But it’s her nose that can’t be turned off outside of work. She’s not a fan of fake butter odor used in movie theaters, nor the excessive use of cinnamaldehyde as a cinnamon bark proxy in oatmeal and baked goods, nor handwritten name tags at social gatherings because of the overpowering marker smell. “As you can imagine, I am an impossible person to have dinner with or to be anywhere with,” she quips.

Vance Civille is often asked whether professional sensory analysts like herself will one day be replaced by electronic noses or sophisticated analytical technology.

“Ain’t going to happen,” she answers. “You need the human perception to understand the chemistry.” Analytical instrumentation has developed by leaps and bounds over her career, she says, and can register the presence of compounds at parts per trillion. “But an instrument can’t see what’s important.” For example, a gas chromatography (GC) spectrum of chocolate can register huge spikes that humans don’t perceive. For chocolate flavor, some of the most important components are pyrazines that exist in parts per billion. “And when you do a GC trace, they are in little tiny mounds,” with 30 or so pyrazines contributing to flavor, she says. You’ll always need a human to know that the tiny mounds of pyrazines are essential to the experience of eating chocolate, she explains.

Vance Civille concedes that electronic noses could be useful for identifying negative odors during quality-control processes, such as the putrid odor of methyl mercaptan in animal fecal material that might contaminate raw materials including coffee or vanilla beans. But even so, you can’t always rely on an electronic nose for unexpected events, she adds. For example, she says, “a batch of vanilla comes in from Zanzibar, and it’s loaded with cat pee.” An electronic nose won’t notice unless it’s trained to detect that specific off-odor. “But a human will notice.”

According to Vance Civille, the biggest innovation in product sensory evaluation in recent years is the development of algorithms to look at the interactions between ingredients in products, the sensory properties of those products, and the consequent conclusions (whether accurate or inaccurate) drawn by consumers about the products.

For example, companies wishing to launch a new antidandruff shampoo need to ensure that the product has “a slightly medicinal smell,” Vance Civille explains. That’s because the first successful antidandruff shampoo had such a smell, and consumers have mentally linked this type of odor with the shampoo’s function. Consumers have an expectation that such a shampoo should smell more medicinal than floral, regardless of whether this is actually related to antidandruff efficacy.

Likewise, diapers should never be sold in packaging made of paper. That’s because when parents open the packaging and hear a crumpling sound, “they believe that the baby will be subject to diaper rash” she says. Diaper packaging that feels soft and doesn’t make noise aligns better with the consumer’s expectations of diaper performance, she notes.

The predictive power of sensory evaluation algorithms is “phenomenal,” she says. They help companies create a sound, smell, and tactile environment that is reinforcing to the product, sometimes independent of that product’s actual purpose. “Say you go into a fast-food restaurant. And you open the vestibule door, and you smell the bathroom deodorizer. You are not even conscious of it completely, but you will like that store less than one that smells of meat and fries.”