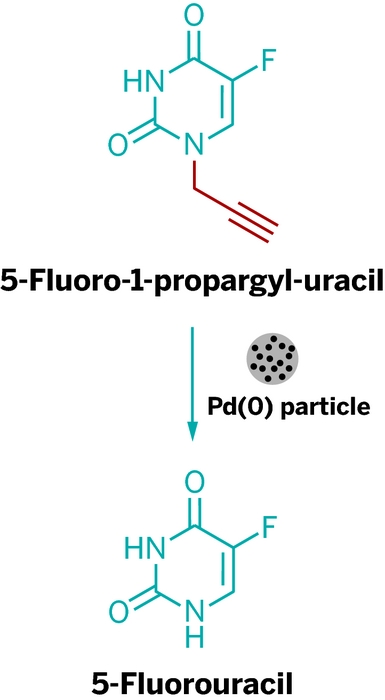 Chemotherapy drugs don’t attack just malignant cells—a long-standing problem in cancer treatment. As they flow through the bloodstream, the drugs also kill healthy cells and cause debilitating side effects such as hair loss, fatigue, and nausea.

Researchers at the University of Edinburgh, in Scotland, want to reduce these adverse reactions by modifying chemotherapeutics so that the compounds become toxic only when they reach tumors. The team, led by Asier Unciti-Broceta, proposes adding masking groups to cancer drugs to render the compounds harmless to cells. The drugs would get unmasked only inside a tumor that contains a previously implanted catalyst particle, the researchers suggest.

To validate their idea, the team masked the popular chemotherapy drug 5-fluorouracil with a propargyl group. Then the scientists placed polystyrene micro­particles impregnated with palladium into dishes containing pancreatic and colorectal cancer cells. When both the particles and modified fluorouracil were present, more than 80% of the malignant cells died after five days (Nat. Commun. 2014, DOI: 10.1038/ncomms4277). The palladium catalyst in the particles activated fluorouracil by removing its propargyl group via dealkylation. Neither the particles nor masked drug molecules alone killed any of the cancer cells.

The solid, uncharged version of palladium—Pd(0)—is not toxic, Unciti-Broceta says. “The metal is used, for example, in dental restoration,” he notes. To prove Pd(0)’s safety, the Edinburgh team implanted palladium-laced microparticles into zebrafish embryos. The fish developed normally over a four-day period.

University of California, Berkeley, chemist Carolyn R. Bertozzi says this exciting work—the first of its kind—“illustrates how rich might be the intersection of bioorthogonal chemistry and transition-metal-based heterogeneous catalysis.” Bertozzi coined the term bioorthogonal chemistry in 2003 to describe artificial reactions that can occur inside living systems without disturbing native processes.

Unciti-Broceta says the Edinburgh team still needs to test its strategy in mice with tumors. But the approach might one day help shrink patients’ tumors to a manageable size, he adds. “Then a surgeon could remove the tumor along with the palladium implants.”