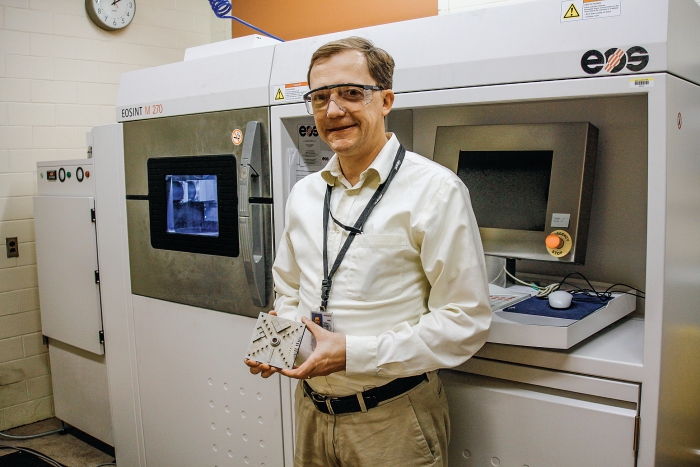 The promise of 3-D printing is undeniable. It holds the potential to transform manufacturing by making it possible to build better, stronger electronics and mechanical parts, maybe even biological tissues. So it’s not surprising that the technology—also called additive manufacturing—was chosen as the focus of the government’s first manufacturing innovation institute.

The National Additive Manufacturing Innovation Institute, also called America Makes, in Youngstown, Ohio, is the first of eight specialized research centers that the Obama Administration hopes to have on-line this year. The research focuses for half of these hubs has been set, while the others are still being developed.

These innovation institutes are a cornerstone of the Administration’s efforts to revive American manufacturing by bringing new technologies onto the factory floor. President Barack Obama has been traveling the country talking about the institutes’ potential to advance new technologies and create jobs. He also mentioned the effort prominently in his January State of the Union address, in which he noted that the U.S. has “the chance, right now, to beat other countries in the race for the next wave of high-tech manufacturing jobs.”

The individual institutes are designed to bring together companies, academia, and government to tackle major research challenges facing industry. The hope is that the hubs will create a support ecosystem around a particular technology.

Initial financial support from the federal government is coming primarily from the Departments of Defense and Energy. That funding will be matched or exceeded by funding from partner companies, universities, and local and state governments.

The Obama Administration plans to have a total of eight manufacturing innovation institutes up and running this year. These hubs are designed to bring companies and academia together to work on important industry problems. Because Congress hasn’t approved the new manufacturing initiative, the institutes are currently being primarily funded through existing programs at the Department of Defense and the Department of Energy. Although the topics of four institutes have not yet been announced, the others have been. Those four and their funding agency are the following:

The goal is for these manufacturing innovation institutes to help bridge the gap between basic research and products on the market, a hole so big it is often called the valley of death. “It is one thing to develop something and get it to work once in a lab. It is a different thing entirely to make a million or 10 million,” explains Michael F. Molnar, director of the Advanced Manufacturing National Program Office headquartered at the National Institute of Standards & Technology (NIST), which is coordinating much of the manufacturing effort.

“We continue to lead the world in things that we invent, but now they are being scaled up elsewhere,” Molnar says. What has changed, he says, is that other countries and other regions have really focused on transitioning research into products.

The idea for manufacturing-focused research hubs came out of a series of reports from the President’s Council of Advisors on Science & Technology (PCAST) and the presidentially appointed Advanced Manufacturing Partnership (AMP) committee.

“There is a sense that there was a willingness by companies to invest in these technologies, but the technologies were too risky for one individual actor,” explains Martin A. Schmidt, provost at Massachusetts Institute of Technology, who helped organize the first AMP committee and its current iteration, AMP 2.0.

That interest was proven with the first institute. America Makes has drawn 83 companies, universities, and governments that have pitched in more than $40 million since it was founded in August 2012, $10 million more than the federal government contribution. “That validated the notion that there is investment out there and we can unlock it by pooling the risk,” Schmidt says.

The U.S. manufacturing industry hasn’t always faced this problem. In the past, large companies had the capacity to support every step of the product development process in-house, from basic research to development to pilot projects to large-scale manufacturing. And companies that didn’t have all of those resources in-house were often surrounded by dozens of small to midsized companies that could support their businesses.

However, pressure from the financial sector forced many companies to abandon their in-house research labs and the infrastructure needed to turn research into products. And much of the outside support structure for companies has either disappeared or moved overseas.

“The greatest handicap for production in the U.S. is the erosion of what we call the industrial ecosystem,” explains Suzanne Berger. Berger is an MIT political science professor who led a recent MIT panel called Production in the Innovation Economy that examined U.S. manufacturing.

One part of that study followed the fate of 150 companies that had spun out of MIT-licensed technologies. Before the study started, many researchers thought the companies’ major problem was access to venture capital. But these MIT spin-offs were successful at getting start-up funding, Berger explains.

The biggest problem came later—sometimes eight or 10 years later—when it was time to move a product from the pilot stage to full-scale production. That’s an expensive step, and not one that venture capital companies have traditionally funded. The largest proportion of companies in the study ended up moving to Asia, primarily because they got significant foreign investment, Berger explains.

“When these companies actually scale up somewhere else, there is a lot of learning that we are losing,” Berger says. If the U.S. loses that, it is probably going to be losing the innovation that comes later with process improvement.

But the problem wasn’t just funding. “How do we get the kind of coordination that used to take place in one company in a much smaller and more fragmented industrial system?” Berger asks. “That is the real question for public policy.”

That is one reason Berger and her colleagues are supportive of the President’s proposed manufacturing innovation institutes, which bring together companies of all sizes with university researchers, educators, and local and state governments. They create that kind of support ecosystem around a particular technology by sharing ideas but also by sharing research space and skilled employees.

The President first proposed the idea of manufacturing hubs in 2012 as a program called the National Network for Manufacturing Innovation. His fiscal 2013 budget request included $1 billion for NIST to create the network of 15 innovation institutes, but Congress has not yet appropriated funds.

The America Makes institute is a pilot institute funded through DOD. This institute is already giving grants to its members to work together on projects that could be of interest to a wide range of industries.

“We are embracing the aerospace, power, energy, and health sciences sectors,” says Ed Morris, a former Lockheed-Martin executive who is the director of America Makes. “The pent-up demand in advanced manufacturing is incredible.”

A second center on power electronics, based in Raleigh, N.C., and funded by DOE, is also up and running. Another two centers on metals manufacturing and digital manufacturing, both funded by DOD, are soon to start up. The remaining four centers the Administration says it will start this year are still under development.

To become a topic for an innovation institute, a proposed research area has to be significant enough that it has a big impact on manufacturing—Molnar has a list of 135 topics companies are interested in. And the research must be “in that applied but precompetitive place,” Molnar explains. Ideally, the institutes would “not only benefit the company, they’d benefit the company’s competitors and the whole ecosystem,” he says.

The Administration is especially interested in topics that will attract small and medium-sized businesses, which are where much of the country’s job growth comes from, Molnar says.

The original vision for the manufacturing innovation institutes wasn’t to have the government decide the research topics. Rather, the idea was to let the private sector direct the focus.

But because the Administration was creating these new institutes from existing funds, it had to fit the topics into the mission of the funding agency. Congress currently is debating legislation (H.R. 2996 and S. 1468) that would create the National Network for Manufacturing Innovation and fund another eight centers. That congressional support would mean that the Administration could open competition up to whatever topic a consortium would propose.

The National Association of Manufacturers has long been supportive of public-private partnerships such as these innovation institutes and has supported the congressional legislation, says Brian Raymond, the organization’s director of technology policy.

But innovation centers aren’t going to be a silver bullet to fix manufacturing, he emphasizes. Tax reform, trade supports, business-friendly regulations, and innovation are just a few of the things that are important. “You have to push all of those at once.”

Schmidt from MIT says the innovation institutes are just one step toward improving manufacturing in America, but they are an important one.

“The White House is very serious about this, and they have demonstrated a commitment to this,” Schmidt says. This is an area that is important to lawmakers, regardless of their political affiliation. “Everyone wins if we can do this.” ◾