With degrees in chemistry, identical triplets are carving out their own careers—in medicine, dentistry, and forensic science

[+]Enlarge
Credit: Aliecia McClain
Dre (from left), Cre, and Bre at graduation in 2012. 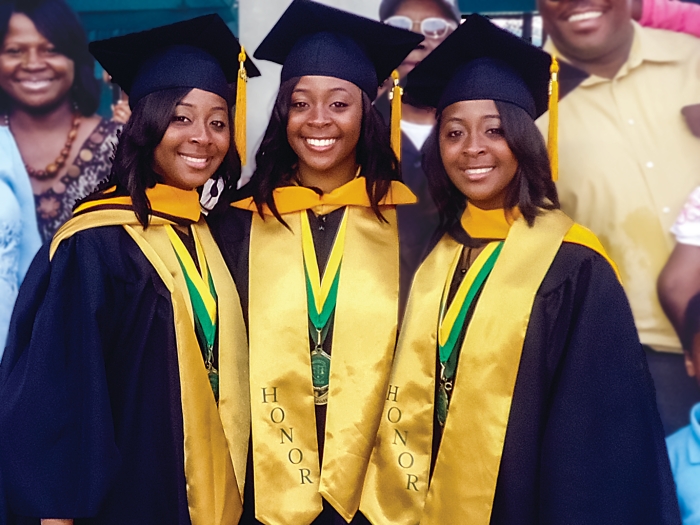 Credit: Aliecia McClain
Dre (from left), Cre, and Bre at graduation in 2012.

But don’t expect them to follow the same career paths. Bre is pursuing medicine, Cre is going into dentistry, and Dre is following her heart in forensic science.

“You can do a lot of things with chemistry,” Bre says. “It’s not specific to one type of job or profession that you want to go into.”

“With a chemistry degree, you have more career opportunities to choose from,” Dre adds.

The triplets grew up in rural Fort Davis, Ala. “We had a cotton field across the street and lived in a three-bedroom house,” Cre recalls. Their mother, only 19 when she gave birth to the girls, had just graduated from high school, and their father was serving overseas in the military.

“My mom opted out of her first year of college to take care of us,” Cre says. “She later enrolled in a dental hygiene program at the University of Alabama, Birmingham, to get her license as a dental hygienist.”

Their parents taught the girls the value of hard work, and their mom instilled in them an appreciation for the sciences. “My mom bought us a doctor’s kit for Christmas” when we were four, Cre says. “We used to play doctor on each other. We would pretend like we had a defibrillator with our hands, and we’d pretend to flatline.”

By the time the triplets reached high school, they knew they wanted to study science. They participated in HOSA-Future Health Professionals and began shadowing health professionals and volunteering at local hospitals. They also got certified to perform cardiopulmonary resuscitation (CPR).

The triplets haven’t always been in such agreement. In fact, when they were younger, they tried desperately to express their individualities. “All of us had different styles of clothing,” Cre says. “I hated what Bre picked out, and I hated what Dre picked out. I just wanted my own style.” To avoid the bickering, their mother dressed them alike until they were 13. “That was part of our punishment” for fighting, Cre says.

As their clothing styles evolved, so too did their personalities. Bre is the “motherly” one, always looking out for her sisters. Cre is the more outgoing and talkative one, and Dre is more laid-back and reserved.

They also excelled in different aspects of chemistry. Cre says she loved problem solving: “With chemistry, you can give me a problem, and I can think through the problem. It’s logical, and eventually I come to a solution.” Bre was particularly good in biochemistry and organic chemistry, and Dre found her strength in analytical chemistry.

Although they love chemistry, it didn’t come easily to them. “It definitely was hard for all three of us in school,” Bre says. “Some nights, we’d stay up studying biochem or physical chem, and we’d say, ‘What have we gotten ourselves into?’ ”

They credit the support they got from each other with getting them through the degree program. “Without my sisters, I don’t think I would have made it,” says Cre, who adds that having a solid support system is critical to encouraging more women of color to stay in the sciences.

Currently, Bre is working the graveyard shift as a certified nurse assistant at a health and rehabilitation center in Trussville, Ala., and plans one day to attend medical school. Cre is working as a dental assistant in Memphis and is planning on applying to dental school.

Dre is working as a forensic science associate in the drug chemistry department at the Alabama Department of Forensic Sciences, in Hoover. “Right now, I’m triaging evidence, basically screening the evidence that a police officer or agency brings in, like marijuana, cocaine, and heroin. We open the packages, take photos, describe the evidence, weigh it, and then pass it along to the next analyst to test it using the GC/MS instrument or the IR instrument, depending on what the drug is.” She plans on eventually getting a master’s degree in forensic science.

Although the triplets enjoy carving out their own identities, the feeling is bittersweet because their careers are taking them in different directions and to different parts of the country. “I miss them; sometimes it gets lonely,” Cre says.

In the fall, Bre will be moving to Virginia to start a master’s of medical sciences program at Hampton University. “We’re getting used to separating and going our different paths,” she says. “But we’re going to support each other no matter where we go in life.”

Maxine Werner (October 24, 2015 6:07 AM)
Medicine, dentistry and forensic science. Triple threat brains and beauty. Their parents must be exceptionally proud as they must be of themselves!
Reply »