Gabor A. Somorjai Award For Creative Research In Catalysis

Sponsored by the Gabor A. & Judith K. Somorjai Endowment Fund 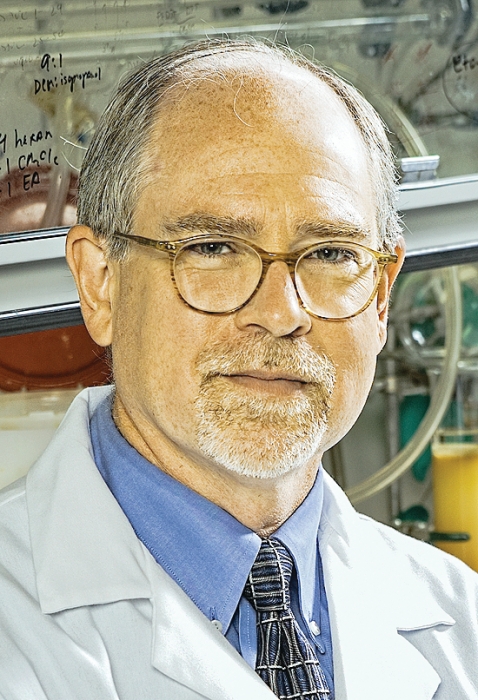 In the 1980s, many chemical engineers were developing heterogeneous catalysts by studying reaction mechanisms and kinetics. Mark E. Davis decided to attack the problem differently by first synthesizing new types of catalytic materials and then figuring out which reactions they can catalyze. “Over the years, we’ve been able to create whole new areas of heterogeneous catalysis by creating new materials,” he says. For his work in developing catalytic materials, Davis is receiving the Somorjai Award.

In particular, Davis’s research on zeolite and molecular sieve catalysts “has been world leading and groundbreaking both in its creativity and in its quality,” says Robert J. Cava, a solid-state chemist at Princeton University. Zeolites are crystalline silicate materials that are extremely porous. These pores make zeolites ideal catalysts, Davis says, because they are about the same size as many organic molecules, providing selective active sites. By tuning zeolite structure and composition, Davis and his colleagues have synthesized new types of materials that can perform a wide range of chemistries, such as reduction-oxidation or acid-base chemistry.

His group was the first to synthesize a molecular sieve with pores larger than 1 nm, expanding the size of possible reactants. The synthesis of this large-pore material, called VPI-5, “is renowned as a groundbreaking event in the history of zeolite chemistry,” Cava says.

Davis also has developed new catalytic materials by taking advantage of the ability to control the hydrophobicity of zeolites. In recent work, he used these hydrophobic materials to create catalysts that isomerize glucose into fructose. This reaction is a key step in converting sugars sourced from biomass into feedstock chemicals, such as monomers for making polymers. The zeolites rely on tin or titanium centers in the crystal structure to serve as Lewis acids to catalyze the reaction.

To keep the Lewis acids active in water, Davis used materials in which the active centers are confined within hydrophobic pores. These catalysts are a breakthrough in the field and already have inspired others working on biomass conversion, says Avelino Corma, who works on heterogeneous catalysts at Polytechnic University of Valencia, in Spain.

Besides synthesizing new zeolites, Davis also has developed other types of heterogeneous catalysts, such as supported aqueous-phase catalysts that promote enantioselective transformations.

Davis, 58, received all three of his chemical engineering degrees from the University of Kentucky: a bachelor’s degree in 1977, a master’s in 1978, and a Ph.D. in 1981. After graduate school, he joined the chemical engineering department at Virginia Tech. He became a full professor there in 1989. In 1991, he moved to California Institute of Technology, where he is currently the Warren & Katharine Schlinger Professor of Chemical Engineering. He is a member of the National Academy of Engineering, the National Academy of Sciences, and the Institute of Medicine of the National Academies.

Davis has won numerous awards over the years, including being the first engineer to win the Alan T. Waterman Award from the National Science Foundation. In 2011, he was the masters world champion in the 400-meter dash for the 55 to 59 age division.

Davis will present the award address before the Division of Catalysis Science & Technology.