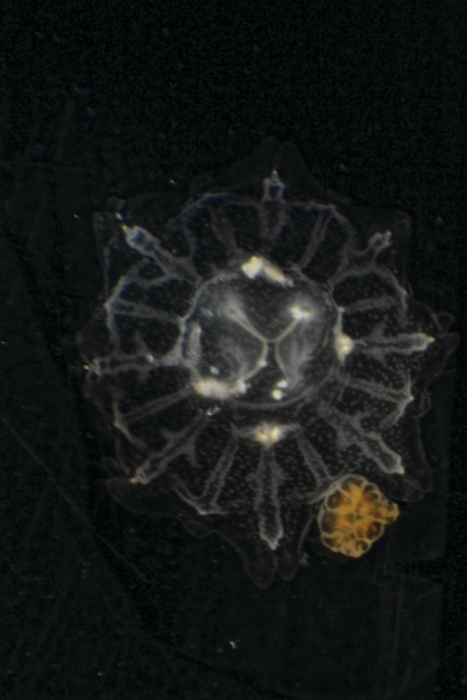 Credit: Courtesy of Barrett Christie
Ooey gooey: The small jellyfish on the right—nearly 1 mm in diameter—is filled with peanut butter.

What do you get when you cross peanut butter with jellyfish? Scientists at the Dallas Zoo and the Children’s Aquarium at Fair Park, in Texas, have been telling this joke for years. But a few months ago, instead of just delivering the obvious punch line, they headed into the lab to get a more scientific answer.

“It was something I had conceived of several years ago,” says Barrett L. Christie, aquarium supervisor. “Wouldn’t it be hilarious to enrich some brine shrimp with peanut butter and get jelly­fish to eat them?” But the timing was never right.

In November of last year, though, Christie’s coworker, P. Zelda Montoya, who breeds jellyfish for the aquarium, had a major surplus of moon jellies, otherwise known as Aurelia aurita. So the pair decided it was time to give the experiment a try.

At first, they fed the baby jellies peanut-butter-filled brine shrimp as planned. But then, knowing that jellyfish can capture small particles from water, Montoya began emulsifying the peanut butter in seawater and feeding it directly to the translucent critters.

Jellyfish retain the hue of whatever they’ve eaten for a few hours after feeding, so the scientists observed their invertebrates turn the color of a jar of Jif. And although they didn’t have a control group of animals, Christie and Montoya say their peanut butter jellies grew at a rate similar to regular A. aurita, at least over a 30-day monitoring period. The researchers published their findings in Drum & Croaker, a lighthearted, non-peer-reviewed journal for public aquarium professionals (2014,45, 14).

Christie is up front about his study not necessarily having a noble purpose. But jellyfish are notoriously difficult to keep alive in aquariums, he points out. Aquarists haven’t been able to figure out what to feed certain species. “So this was a little bit of a joke,” he says. “But it also holds a kernel of promise for future studies.”

You might think the fact that researchers are investigating the odor of earwax is a joke, too. But a team led by George Preti of the Monell Chemical Senses Center, in Philadelphia, is quite serious about swabbing out the auditory canals of its human subjects. 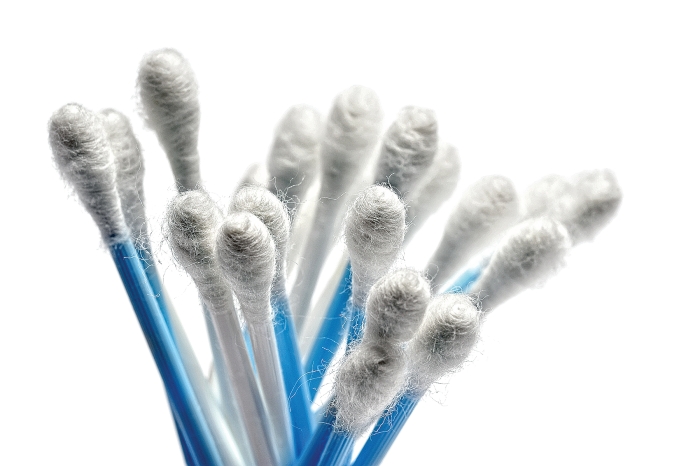 Credit: Shutterstock
Forensic swabbing: Your earwax odor may identify you.

“Body odor can be used to identify an individual,” says Katharine A. Prokop-Prigge, a Monell postdoc. “No two people smell the same.” So Prokop-Prigge, Preti, and the rest of the group wanted to know whether the same is true of earwax.

To find out, the researchers swabbed the ears of an equal number of Caucasian and East Asian men and then analyzed their specimens’ chemical makeup with gas chromatography-mass spectrometry. Mainly composed of long-chain fatty acids and other oily compounds such as squalene, earwax comes in two varieties: yellow and wet, or white and flaky. Because of a single gene variation, Caucasians typically carry around the former, and East Asians generally sport the latter.

The Monell team determined that the two types of earwax contain a similar profile of odiferous compounds (J. Chromatogr. B 2014, DOI: 10.1016/j.jchromb.2014.01.043). The yellow variety just has larger amounts of the volatile chemicals, making it smellier. Two of the most prevalent components in Caucasian earwax, the researchers found, are hexanoic acid, which has a barnyard animal odor, and isovaleric acid, which smells like dirty socks and parmesan cheese.

East Asian earwax contains only one volatile at higher levels than Caucasian earwax: 6-methyl-5-heptene-2-one, which Prokop-Prigge describes as having a smell reminiscent of nail polish.

According to the postdoc, these results have greased the wheels for further earwax research. “We’re interested in what earwax can tell us about you, your health, and even where you’ve been.”