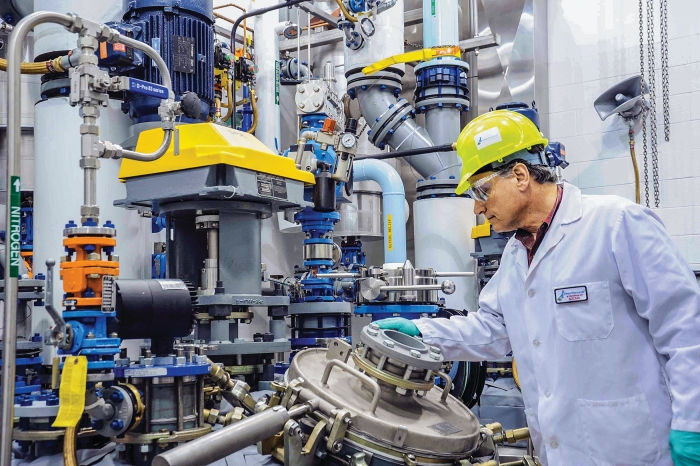 Ariad Pharmaceuticals spent 15 years trying to come up with its first product, but when the company finally had it, things moved fast.

It would take the Cambridge, Mass.-based biotech firm less than five years to conduct clinical trials and get an initial regulatory approval in 2012 for its cancer drug Iclusig (ponatinib). Both U.S. and European regulators accelerated approval because the drug addresses rare, life-threatening illnesses that lack satisfactory treatments.

After determining in 2006 that it had a compound for development, Ariad started clinical trials in 2008. Exciting results soon emerged. “The drug was working exactly as designed,” says Christopher K. Murray, Ariad’s vice president for technical operations. With the excitement, however, came a sense of responsibility to succeed in developing a product that could benefit pat­ients with no other alternative, he adds.

To move quickly, Ariad needed a partner to make the active ingredient at large scale. “We had a strategic plan to work with a small, flexible contract development and manufacturing organization based in the U.S.,” Murray explains. Location was near the top of Ariad’s requirements list for ease of communication and access. After evaluating several U.S. firms, Ariad settled on Riverview, Mich.-based Ash Stevens as the best match.

“We knew we had a program that needed to move along very quickly,” Murray says, “and Ash Stevens didn’t blink an eye.” Although small, with 80 employees, Ash Stevens has made oncology products for more than 50 years and has manufactured a dozen new drug entities. Moreover, it had experience handling fast-tracked drug programs, and at one point juggled three concurrently.

Fortunately, the synthesis of ponatinib is a straightforward convergent route from two key intermediates. Although similar in overall structure to other tyrosine kinase inhibitors, the molecule differs from most of them because it contains a carbon-carbon triple bond, which Ariad incorporated purposely for specificity and potency.

“Ariad had a synthetic route, and together we contributed to industrializing it,” is how Stephen A. Munk, chief executive officer of Ash Stevens, describes the relationship. For example, to avoid isolating an intermediate product, the synthetic process combines two Sonogashira couplings into one step to create the alkyne arm. According to Murray, “the efficiency and impurity control realized in this telescoped metal-catalyzed coupling step is impressive.” Munk calls it a “great example of industrialized palladium chemistry.”

But the work didn’t end there. Ariad wanted to apply Quality by Design (QBD) principles that rely on statistical methods to gain an enhanced understanding of safety and control in manufacturing. Believing that regulators were heading toward requiring QBD, “Ariad really wanted to push the envelope and be state of the art in terms of its regulatory filing,” Munk says. 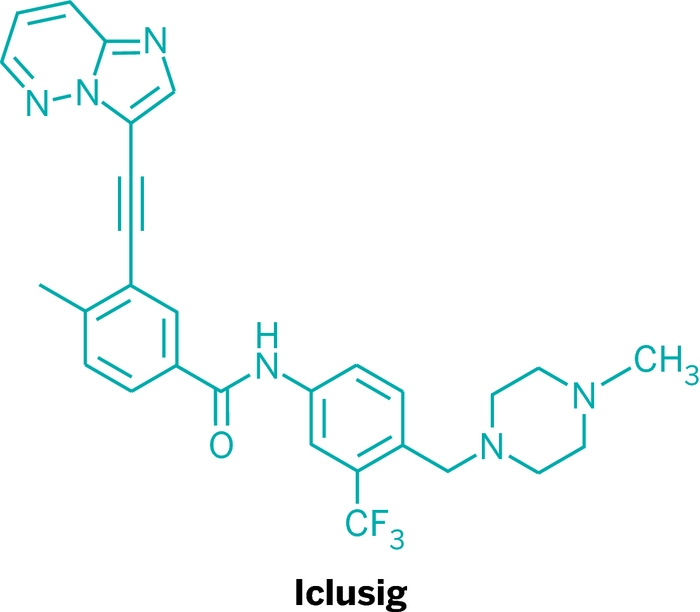 Years in development: Less than five

According to Murray, regulators’ standards for chemistry, manufacturing, and controls have increased significantly over the past decade. But regulators aren’t the only ones driving change. “It is a shift in the whole industry toward building robust processes that are based on data, statistical design, and documentation,” he says.

Along with QBD, Ariad wanted an overall picture of its product from launch to going generic many years down the road. As a result, Murray says, “process development of ponatinib was challenging partly because of the timeline and budget but also because we committed internally to a life-cycle management strategy.” In addition to helping satisfy impending regulations, QBD would help here as well, he adds. “We agreed with Ash Stevens that we would collaborate closely and make it work.”

Implementing QBD took a huge team effort, the partners say, and being on a regulatory fast track didn’t help. Regulators “don’t give you a pass on how much work you have to do,” Munk says. “You still have to do the same amount of process qualification, parametric work, report generation, documentation, and so on.”

In addition, “Ariad also invested far more time and effort than I have generally seen in understanding every detail of the analytical chemistry,” he says. Ariad scientists, Murray acknowledges, aren’t shy about being involved and asking questions.

For example, although Ariad doesn’t have manufacturing capabilities, it has always had analytical and process chemistry labs in which it develops technology to transfer to production partners. “It is the perfect balance between having those internal resources and managing overall costs,” he says.

At the same time, contract manufacturers such as Ash Stevens are the experts in their own plants and in presenting processes to the regulatory authorities, Murray says. “They were equally the experts in the overall process design and the life-cycle management, and so we jointly issued QBD documents.” The companies plan to continually update these “living documents” and rely on them for running the process for the life cycle of the product.

“We have very good cross-functional collaboration and communication,” Murray says. Although the partners challenge each other frequently, because their communication is earnest, open, and respectful, they can truly collaborate and end up with the best possible result, he believes.

Beyond communicating, Murray believes the relationship works because of shared values around scientific excellence, business integrity, and clinical scholarship, as well as an appreciation for good project management. He says it’s rare to find a contract services partner that routinely delivers on time, tracks every milestone, and follows up and communicates results.

“Ash Stevens understood all of the pressures that we were under as a small pharmaceutical company bringing a product to the market and all of the travails you can run into with a clinical program,” Murray says.

Less than five months after Ariad’s filing and three months ahead of schedule, the Food & Drug Administration granted an accelerated approval in December 2012 on the basis of results from a pivotal Phase II trial. But after Iclusig was on the market for 10 months, sales and some clinical trials were suspended because of concerns about severe vascular side effects that occurred in at least 27% of patients, according to FDA. Facing an uncertain future, Ariad cut its staff by 40%, or 160 employees, to conserve resources.

Faster than analysts expected, FDA allowed sales to resume in December 2013 for a smaller patient population and with a risk mitigation strategy in place. Iclusig now is limited to patients who specifically have the T315I mutation or for whom no other treatment is indicated. As a result, the number of eligible patients, about 1,300, is less than half of the initial estimates.

With a price tag around $125,000 per year per patient, Iclusig could reach annual sales of about $110 million by the end of 2015, analysts estimate. Whether Ariad will ever see greater sales from broader use of the drug is uncertain, although some clinical trials are expected to proceed. And FDA has asked for a new study to determine whether the drug can be effective at lower doses. The setback had no effect on the partnership between Ariad and Ash Stevens, where the fit remains good and the process remains on track.

Drug Development
The complete response letter: The mail no one wants to receive
Pharmaceuticals
Ups and downs for Pfizer in contract manufacturing
Pharmaceuticals
Drug manufacturing woes grow
Share X
To send an e-mail to multiple recipients, separate e-mail addresses with a comma, semicolon, or both.
Title: Staying On Track
Author: Ann M. Thayer
Chemical & Engineering News will not share your email address with any other person or company.