LIGHT AND STRONG
[+]Enlarge
Credit: DIC
Automakers increasingly use heat-resistant plastics like polyphenylene sulfide to reduce the weight of their vehicles. 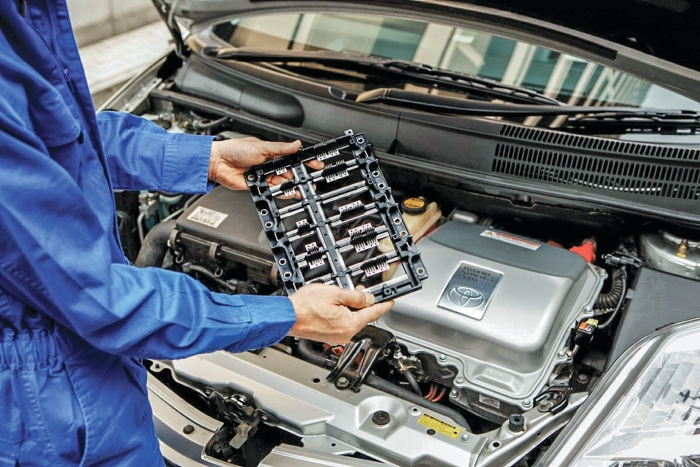 Credit: DIC
Automakers increasingly use heat-resistant plastics like polyphenylene sulfide to reduce the weight of their vehicles.

The business of making the high-strength plastic polyphenylene sulfide has not known this much excitement since PPS first appeared on the market in the early 1970s.

A Japanese company, Teijin, is teaming up with a South Korean firm, SK Chemicals, to build a plant in South Korea based on a new SK process. Both are newcomers to the market. Meanwhile, Japan’s Toray Industries is also building a large new facility in South Korea that will take advantage of the country’s lower costs. DIC recently started up a PPS plant in its home base of Japan, and China Lumena New Materials is cementing its role as the world’s largest producer with a new plant of its own.

More than 40 years after PPS was launched, prospects for the engineering plastic are rosier than ever. Lightweight and resistant to heat and chemicals, PPS is being used to make more and more car parts every year.

As Japanese PPS producers increase capacity to satisfy global demand growth of as much as 8% annually, they are drawn to the business-friendly environment of South Korea. But overcapacity has plagued the industry for years, and whether the market can absorb all the new capacity remains to be seen.

Global demand for PPS is roughly 80,000 metric tons per year, and the market is worth more than $500 million, according to Kiyotaka Kawashima, general manager of the solid compounds division of DIC, the world’s second-largest PPS producer.

“Prospects are good for this material for at least the next three to five years,” Kawashima says. “The variety of automotive applications is increasing, as is the range of applications in other industries.” In addition to cars, DIC is targeting smaller markets such as reusable containers used in the food industry.

When Teijin enters the market, it will be treading on DIC’s auto industry turf. Teijin is already a major supplier of polymers, notably polycarbonate, to the auto industry as well as the electric and electronic sectors.

“Demand is still quite small for this metal-replacement material, compared with the polycarbonate market and its demand of 3 million tons annually,” says Shingo Suzuki, Teijin’s general manager for electric materials and performance polymers. “But PPS is one of the most successful and promising super engineering plastics.”

TAKING OUT THE CHLORINE

SK’s Initz process does away with p-dichlorobenzene as starting material and does not generate unwanted coproducts. NOTE: X is a chlorine-free proprietary molecule that is recycled.

The auto industry is seeking to reduce the weight of the vehicles it produces, and it is looking to plastics to accomplish this, according to Robert Outram, associate director at IAL Consultants, a London-based chemical market research firm. “PPS is very niche. It’s used in high-performance, high-temperature applications,” he says.

Fuel-efficient turbocharged engines are a natural outlet for high-performance plastics because the temperatures and pressures at which they operate can be too high for regular plastics, Outram says. Another potential application is housings for the batteries in electric cars, where PPS can help to contain excessive heat or chemical leaks.

PPS is rarely used on its own but rather is blended with glass fibers and other filling materials before being formed into parts. Highly heat resistant, it can withstand temperatures of nearly 550 °F. It does not dissolve in solvents below 400 °F.

Featuring a structure of alternating sulfur atoms and phenylene rings, PPS is extremely stable, according to Chevron Phillips Chemical, the main U.S. producer. The traditional process for making PPS involves polymerizing p-dichlorobenzene and sodium sulfide in a polar organic solvent. Developed in the late 1960s by Phillips Petroleum (now Chevron Phillips), the process is used by all PPS producers except SK and Teijin.

SK built a pilot plant using its novel process in 2009, according to Hyo-Kyung Kim, president of Initz, the Teijin-SK PPS venture. The process uses benzene as the starting material rather than p-dichlorobenzene. And unlike the traditional process, it does not generate any side products, Kim says.

“We did not intentionally set out to avoid dichlorobenzene,” Kim says. “We thought that we could create a more economical and environmentally friendly process.” With annual capacity of 12,000 metric tons, the Initz plant is scheduled to begin producing in about a year.

At Teijin, Suzuki is confident that the combination of SK’s process and Teijin’s compounding technology will enable Initz to capture 20% of the global market. Teijin may be new to PPS, he says, but Initz will benefit from Teijin’s close links to Japanese manufacturers, particularly auto parts makers that operate internationally.

Teijin’s competitors in Japan, the world’s top producer of PPS, aren’t standing by. Toray announced in October that it will build its own South Korean PPS plant, with 8,500 metric tons of capacity. Using the traditional process, the facility will produce its own starting materials—including p-dichlorobenzene—and also feature compounding facilities. Toray plans to sell the output primarily in South Korea and China.

With a global market share of about 25% to protect, DIC is not sitting on its hands either. The company recently completed a 5,500-metric-ton PPS plant in Kashima, Japan. If or when DIC builds another PPS plant, it will implement a cheaper production process, Kawashima notes, adding that the company is currently conducting process development research. The final outcome might be a series of modifications to the standard process or a completely new one in order to achieve lower costs.

DIC is strong in Japan, but it also operates compounding plants in Malaysia and Austria. The company intends to become a truly global player in an industry that currently doesn’t have one, Kawashima says. “We don’t want to be just a regional giant.”

Any global player should be active in China, which absorbs roughly two-thirds of the world’s PPS output, according to Lumena. Based in Chengdu in the southwest of the country, Lumena is about to start up a 25,000-metric-ton plant that will boost its capacity to 55,000 metric tons.

PPS demand in the country is mostly driven by the desire to cut air pollution, Lumena says. Filters made with PPS, the firm claims, can cut emissions by up to 30% in steel mills, power plants, and incinerators.

At Teijin, Suzuki notes that the growth of the PPS market will not depend on one particular country or application. For example, much is made of hybrid cars because they often contain twice as much PPS as conventional vehicles. But hybrids are a small slice of the auto market. More important for PPS, Suzuki says, is the overall switch from metal to plastics in auto manufacturing.

If a global PPS leader ever emerges, not only will it have to develop a presence in all parts of the world, but it will also have to learn to satisfy user requirements that vary widely according to where they are located. For that reason alone, the PPS business should remain lively for years to come.

Petrochemicals
Polyester made from coal? China is betting on it
Business
AkzoNobel has new route to ethyleneamines
Materials
Electric cars fuel separator market growth
Share X
To send an e-mail to multiple recipients, separate e-mail addresses with a comma, semicolon, or both.
Title: Venerable Resin Turns New Again
Author: Jean-François Tremblay
Chemical & Engineering News will not share your email address with any other person or company.