MAGNETIC FIELDS
[+]Enlarge
Credit: Jongpil Kim
These red and blue coils generate an electromagnetic field across cells growing in the wells of a plastic plate inside an incubator. The device can expose the cells to different magnetic frequencies or block out the natural magnetic field of Earth. 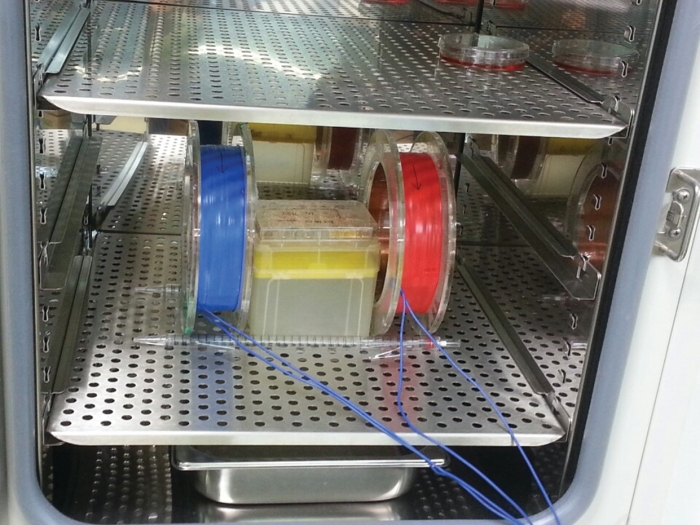 Credit: Jongpil Kim
These red and blue coils generate an electromagnetic field across cells growing in the wells of a plastic plate inside an incubator. The device can expose the cells to different magnetic frequencies or block out the natural magnetic field of Earth.

Environmental conditions, such as heat, acidity, and mechanical forces, can affect the behavior of cells. Some biologists have even shown that magnetic fields can influence them. Now, for the first time, an international team reports that low-strength magnetic fields may foster the reprogramming of cellular development, aiding in the transformation of adult cells into pluripotent stem cells (ACS Nano 2014, DOI: 10.1021/nn502923s). If confirmed, the phenomenon could lead to new tools for bioengineers to control cell fates and help researchers understand the potential health effects of changing magnetic fields on astronauts.

“It’s been a huge unknown how a cell senses electromagnetic fields and then translates that into a change in identity or a change in gene expression,” says Christopher J. Lengner, a cell biologist at the University of Pennsylvania. He worked with a group of bioengineers led by Jongpil Kim of Dongguk University, in Seoul, South Korea, to see if these fields could influence a process they were all interested in: reprogramming a cell’s developmental state.

Since 2006, researchers have been using methods to transform adult cells into pluripotent stem cells using viral vectors. The vectors carry genes that cause global changes in a cell’s gene expression. Bioengineers are interested in this process because it generates stem cells that could be used in tissue engineering.

Kim’s group followed the recipe for inducing pluripotency in cells from adult mice, either with no applied magnetic field or in a 1-millitesla field at one of three frequencies—10, 50, or 100 Hz. Then they monitored the cells for gene expression patterns characteristic of pluripotent stem cells. Exposure to the 50-Hz magnetic field resulted in a 30-fold increase in the number of cells that got reprogrammed. And surprisingly, they found that cells grown in a chamber that blocks Earth’s geomagnetic field were unable to transform into stem cells.

Previous work had shown that exposure to low magnetic fields can have epigenetic effects, so the researchers looked at the expression levels of genes coding for enzymes that modify histones, the proteins that pack chromosomal DNA. In cells exposed to the magnetic fields, they found a significant increase in the expression of a gene for an enzyme called MLL2. This enzyme methylates histone proteins to regulate gene expression. As further evidence of MLL2’s connection to the magnetic field effect, the team found that MLL2 was down-regulated in cells when Earth’s geomagnetic field was blocked. When they overexpressed the MLL2 gene, the cells could transform into pluripotent stem cells, even in the absence of a magnetic field.

“It’s still unknown how the cells are sensing the electromagnetic field,” Lengner says. “But we now have an idea how it affects them at a molecular level.”

Yick Wah Fong of the Harvard Stem Cell Institute is skeptical about the link between magnetic fields and MLL2. The expression of this enzyme, he says, may simply reflect that a cell is undergoing a developmental change and is not itself the trigger for that change.

Tufts’s Levin says the results raise a number of questions. In particular, how do cells sense both the static magnetic field of Earth and the oscillating magnetic fields applied in the study? Levin would like to see more research on the sensing mechanism. This kind of work will help researchers understand the potential physiological effects of space travel. In space, Earth’s magnetic field is no longer at play, but astronauts would be exposed to new ones.

Comments
Erin Reynolds (January 14, 2015 11:29 AM)
Stem cell therapy is the use of stem cells to treat or prevent a disease or condition. Bone marrow transplant is the most widely used stem cell therapy, but some therapies derived from umbilical cord blood are also in use. http://www.placidway.com/package/2265/Stem-Cell-Therapy-for-Diabetes-In-Europe
Reply »

Sebastião (June 25, 2015 10:27 AM)
Good day
this might be related to Marko Rodin's theory on DNA's third groove (magnetic one)
I don't know if the authors will read this, but it might be a good thing for them to try and understand his theory.
Marko is a mathematician, so he might not say things as a(n) (epi)geneticist
Reply »