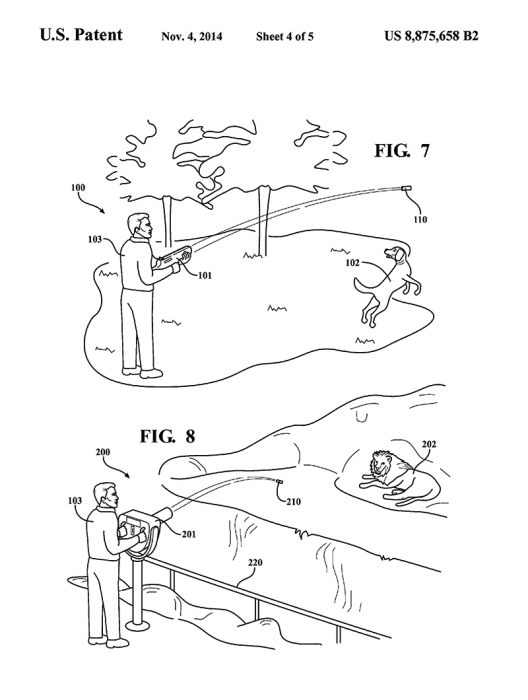 A new year brings new ideas. As we begin 2015, the Newscripts gang wanted to bring two wacky-yet-wonderful new inventions to our readers’ attention.

The first item, which we found via those patent-perusing enthusiasts at Annals of Improbable Research, is a projectile pet food (US 8875658 B2). The invention, assigned to information technology service firm A.J. Boggs & Co., is for an edible dart, ball, or disk that can be fired from a launcher for pets to chase and then eat.

“Every time I tell someone about this patent they laugh,” lead inventor J. Clarke Anderson tells Newscripts. Anderson says he got the idea while playing with his kids. He noticed that their Magic Nuudles—edible cornstarch pieces that can be used to create sculptures of just about anything—were about the same consistency as the darts that go into their Nerf foam dart blasters.

So, they took some dog food, added it to the end of the Magic Nuudles, and rolled them so they would fit into the blaster. Anderson’s dogs loved chasing the edible projectiles as they were launched hither and yon in the backyard.

“There’s really nothing fun about dog food,” Anderson points out. “The idea that you’ve got something you can shoot around to give the dog some exercise at the same time, we thought, was pretty cool.” He says the invention could help curb pet obesity and could also give pet owners an opportunity to spend time with their beloved companions after a tiring day at work while also kicking back on the deck with a beer.

The patent also mentions using the projectile food to feed the wildlife at zoos and safari parks.

Anderson tells Newscripts that he’s currently looking for partners and investors, and is even considering crowdfunding the projectile food project.

In nonedible food news, the bacontrepreneurs at J&D’s Foods recently started selling bacon-scented pillowcases. For $12.99, you can buy a pillowcase that smells like bacon, and the aroma will last six to 12 months if the pillowcases are laundered properly.

J&D’s got their start selling bacon salt, a vegetarian seasoning that “makes everything taste like bacon.” Since then, they’ve gone on to create baconnaise sandwich spread, as well as nonedible bacon-scented products, such as a bacon sunscreen and a bacon shaving cream. 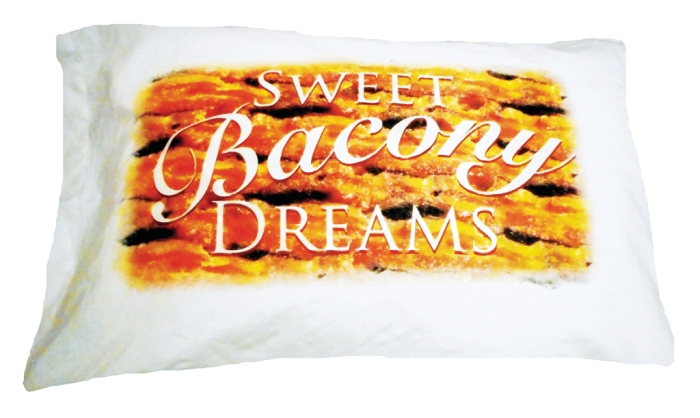 According to a press release, the pillowcases use state-of-the-art printing technology stolen from NASA. When the Newscripts gang asked for further details on the printing process, J&D’s cofounder David Lefkow said, “If I told you, I’d have to kill you. And you seem nice, so I don’t want to kill you.” Lefkow did divulge that the process involves applying a bacon-scented polymer to the pillowcase.

“We’ve done a lot of different bacon-scented products before, and this one was the most difficult,” Lefkow tells Newscripts. The toughest part, he says, is finding the thing that smells most like bacon and also overcomes the inherent smell of the polymer ink.

Thousands of the pillowcases have already been sold, Lefkow says—a clear demonstration of Americans’ hunger for bacon-themed products.