High-intensity source could get IR imaging in clinicians’ hands by speeding up data acquisition and enabling use of cheaper, uncooled detectors 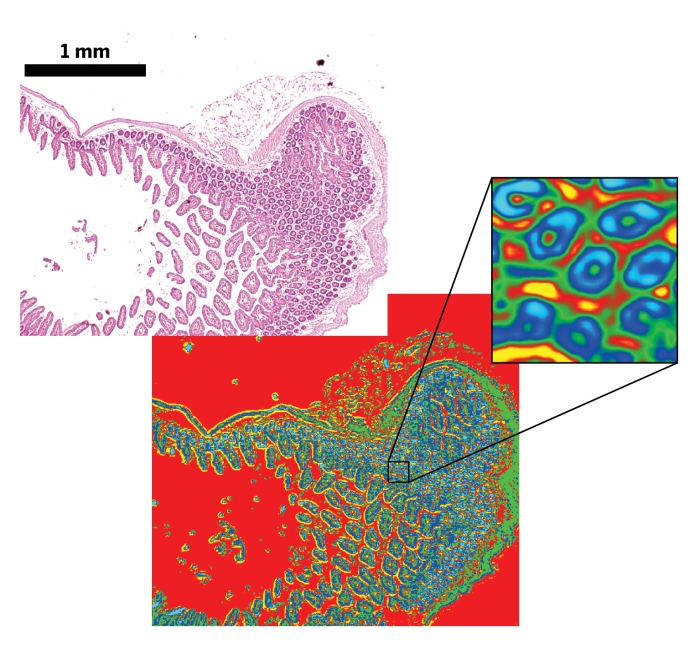 During the past two decades, infrared imaging has shown great promise for mapping tumors and other clinical applications. But conventional IR imaging is slow. The instruments are big. And the detectors must be cooled, often with liquid nitrogen. So the technique has remained out of the hands of physicians.

A new way of capturing IR images might finally change all that.

The secret is a relatively new IR source—the tunable quantum cascade laser (QCL). QCLs are high-intensity IR sources, which now can be tuned over broad wavelength ranges. They can be used with less sensitive detectors than the ones typically used for conventional Fourier transform (FT) IR imaging.

QCLs have enabled what Rohit Bhargava, a bioengineering professor at the University of Illinois, Urbana-Champaign, calls “discrete frequency imaging,” in which a handful of frequencies are collected, one frequency at a time. This type of data acquisition is faster than collecting the whole spectrum.

“There are many cases where you don’t need the whole spectrum,” Bhargava says. For example, to distinguish different kinds of tissues in a sample, his team has found that at most 20 or 30 frequencies are important. And often just two or three are enough.

Conventional FTIR instruments can’t zero in on specific frequencies because they rely on a “globar” source, which is essentially a heated wire. Its low intensity is spread out over the whole mid-IR spectral range. Even though the entire spectrum is collected simultaneously in FTIR, it is slower than QCL because multiple scans and averaging are necessary to achieve the signal-to-noise levels required for most clinical applications.

QCLs have also allowed scientists to look at samples they couldn’t look at before. The switch from globars to QCLs “means many more photons per spectral bandwidth—orders of magnitude more,” says Wolfgang Petrich, a professor at the University of Heidelberg, in Germany. The extra photons allow the analysis of samples that would otherwise yield insufficient signal-to-noise ratios, such as water-rich samples that swamp IR peaks of interest.

At the moment, scientists do almost all IR imaging on dried cells, “because infrared doesn’t go through water very well,” says Peter Gardner, a spectroscopist at the University of Manchester, in England. “I think the QCL system will be very good at that. You’ve got more power to punch through the water, which allows you to obtain a spectrum of a living cell.”

For other samples, scientists can use a less sensitive but also less expensive detector, Petrich notes. For example, QCLs can be used with microbolometer array detectors, which measure IR radiation as heat. Unlike the mercury cadmium telluride (MCT) detectors used in FTIR imaging, bolometers don’t need to be cooled with liquid nitrogen, making them less expensive and easier to operate. And they come in larger formats that allow scientists to acquire images from a larger field of view.

Until now, researchers have been required to build their own QCL-based instruments. San Diego-based Daylight Solutions has started selling a QCL microscope called Spero for IR imaging applications. The system includes a tunable QCL source that covers the spectral region from 900 to 1,800 cm−1, the so-called fingerprint region in IR spectroscopy (Analyst 2014, DOI: 10.1039/c4an00638k). The company hopes that its commercial instrument will encourage clinical use.

Despite the strengths of QCL IR microscopy, none of the researchers plans to throw away his FTIR instrument anytime soon.

In applications where the full spectrum is needed because the frequencies of interest aren’t already known, it makes sense to go with the FTIR, Petrich says. But he thinks that using FTIR is probably unnecessary in biomedical imaging. “In biomedical IR spectroscopy, we know where our molecules of interest sit.”

These results suggest a bright future for QCL imaging, but even its advocates don’t expect it to reach the clinic immediately.

“We’re interested in trying to get into pathology departments,” Gardner says. “But it will be many years before this would be used routinely for regular patient diagnosis in the hospital.”