Prominent researchers and organizations see many gains in normalized relations 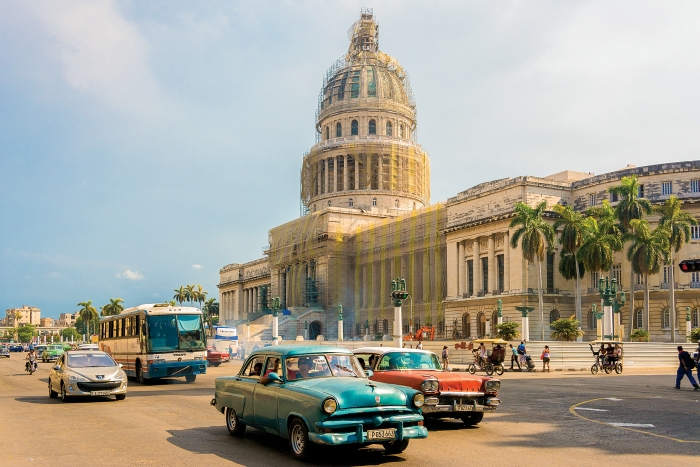 Credit: Shutterstock
The Cuban Academy of Sciences is housed in El Capitolio, seat of the Cuban government until the Communist revolution in 1959.

The U.S. scientific community is signaling enthusiastic support for President Barack Obama’s moves in late 2014 to restore diplomatic relations with Cuba. The Administration announced changesthat will defang a more than 50-year-old U.S. trade embargo with Cuba, a major source of antagonism with the only communist country in the Western Hemisphere. These include facilitating travel between the countries for research and allowing scientists to attend professional meetings and participate in educational activities.

For science and technology, “it will be a tremendous relief,” says chemist Zafra M. Lerman who is president of the Malta Conferences Foundation, which supports scientific meetings and collaboration in the Middle East.She also advocates for scientific exchange between U.S. and Cuban scientists and has visited Cuba seven times with members of the American Chemical Society. In the past, she says, “we were limited in what we could do and only could stay for a short time. I think this will now give us the opportunity to have collaborations between American scientists and Cuban scientists in addition to being able to attend and ­lecture with no hassle in conferences.”

The American Association for the Advancement of Science “applauds President Obama’s statement regarding efforts to establish new diplomatic ties with Cuba,” the organization says in a statement. In April 2014, AAAS and the Cuban Academy of Sciences signed a landmark memorandum of understandingthat outlined a plan to advance scientific cooperation by Cuban and U.S. scientists in the areas of emerging infectious diseases, brain disorders, cancer, and antimicrobial drug resistance.

As one of the last vestiges of the Cold War, the U.S.-Cuba standoff often served to highlight the sometimes terrifying, sometimes compassionate roles of science and technology in the mid- to late-20th century’s clash of ideologies. The nuclear arms race with the Soviet Union—with Cuba as a proxy state just 90 miles from the U.S.—was a boon to the U.S. research enterprise. The U.S. federal government poured trillions of dollars into chemistry, physics, and other sciences to maintain military and economic superiority.

But in time, particularly after the end of Soviet-era economic support in the 1990s, Cuba’s historic strengths in medicine and related research areas nurtured the flowering of a biotechnology effort on the island that continues today. Cuba produces many sought-after medicines to treat cancer and infectious diseases and provides them cheaply to the developing world.

Stiff political opposition remains in the U.S. to normalizing relations with Cuba and lifting the trade embargo, which only Congress can do. Sen. Marco Rubio (R-Fla.), the U.S.-born son of Cuban immigrants, issued a blistering critique of Obama’s actions, as have other lawmakers.

However, “openness worked with Eastern Europe,” and it will work with Cuba, says Ruben Carbonell, a professor of chemical engineering at North Carolina State University. Carbonell was born in Cuba but left for the U.S. with his parents just weeks before the Castro regime took power in 1959.

Carbonell says he has been back to Cuba twice—both times to visit family, with one visit timed so he could attend an immunology meeting. Among the many impressive technologies Cuba has developed as part of its burgeoning biotechnology enterprise, he says, is the ability to make biotherapeutics on a large scale.

“Cuba has 30 vaccines for infectious disease as well as 30 oncology products that are either in the world market or under investigation,” he says. With the lifting of the embargo, it would be easier to bring some of these vital medicines to the U.S. for clinical testing, Food & Drug Administration approval, and marketing, he says.

“The labs in Cuba—for academe or companies—are not always on par with the U.S.,” Carbonell says, “but they do pretty well with what they have. The Cubans do have production and regulatory systems in place. They have great products and they do great science.” Global companies are eager to invest there, he asserts, which will help the Cuban people with economic development as well as provide U.S. firms with a market of some 11 million people.

Carbonell and other researchers encourage colleagues to do more with Cuba, including participating in international scientific meetings that are, or soon will be, scheduled to take place there.

“We have an obligation to the people of Cuba to enable them to make it ahead in the world,” Carbonell says. Life expectancy and infant mortality rates in Cuba are on par with the industrialized world. However, he adds, “life there is very, very tough, with a daily struggle for food and other basic necessities.”