Techcomp Holds Cards For All To See 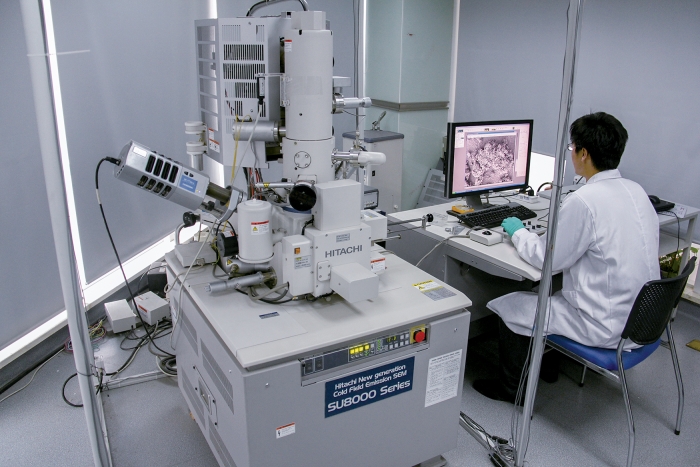 A company that manufactures its own products and distributes similar ones made by other firms is bound to get into sticky situations, and yet Techcomp thrives in that dual role. The Hong Kong-based firm builds scientific instruments at a plant in Shanghai while acting as the Chinese, or in some cases pan-Asian, distributor for a stable of international suppliers.

Techcomp At A Glance

Main businesses: Manufacture of scientific instruments, mostly gas chromatographs. Distribution of instruments made by others.

And rather than try to reduce the potential for conflict, the company has been expanding the range of lab instruments it makes by buying up manufacturers in Europe and North America. Techcomp took its biggest step in that direction in October when it spent $13.5 million to acquire Bruker’s U.S.-based gas chromatography business.

One of the largest instrument distributors in China, Techcomp provides sales and technical support in most of the country. The company’s geographic coverage and market knowledge act as draws to foreign instrument makers struggling to develop their businesses in China. In recent years, Techcomp has been using its stronghold in China to support its expansion in the rest of Asia and elsewhere in the world.

“Our approach is to be very open,” says Richard Lo, the candid founder and chief executive officer of Techcomp, as he explains how his company can be both distributor and manufacturer. “When discussing a possible cooperation, we explain all the facts and potential conflicts. And if we later develop a new business that might affect the relationship, we call them up.”

Lo earned a bachelor’s degree in biochemistry in Hong Kong in the early 1980s and an M.B.A. a few years later. Upon graduation, he was hired by a major trading firm to launch its scientific instrument business in China. Lo left the firm in 1988 to found Techcomp as an instrument distributor.

One of the reasons Techcomp has grown as a distributor, according to Lo, is that it offers superior customer support. For instance, phone calls to the company are always answered by a person. “I hate it when it’s a machine that answers you, and I imagine my customers hate that too,” he says.

As Techcomp grew, it started to represent more and more foreign companies, becoming something of an instrument superstore for China. Hitachi, which Techcomp started representing in 1996, currently dominates the firm’s product offerings. Hitachi had been selling its instruments directly in China but was dissatisfied with the results, Lo says.

Good technical support is important in the instruments business, says Steven Hamilton, director of education at the Society for Laboratory Automation & Screening, a U.S.-based professional group. SLAS members “are looking for distributors with established Chinese networks and a good reputation for support,” he says. “A big challenge is finding a distributor who has a commitment to customer service, training, and support—not just selling.”

Even if they provide superior customer service, distributors don’t appeal to all instrument buyers in China. Kevin Chen, lab hardware manager at the Guangdong-based pharmaceutical firm HEC Pharm, says his company prefers to negotiate directly with manufacturers. Major instrument companies, such as Agilent Technologies and PerkinElmer, are able to provide customer service in China that is equal to what they offer in their home countries, Chen figures.

Techcomp launched its own manufacturing business in 1994 by opening a plant in Shanghai that turns out gas chromatographs, spectrophotometers, and other instruments. According to Lo, Techcomp is a mid-range gas chromatograph provider. “We’re making Honda Civics and Toyota Corollas, not Rolls-Royces or BMWs.” About half are exported to the U.S. and Europe, where they are often sold under the names of better-known companies, Lo notes.

For most of its history, Techcomp’s sales and profits have been growing by 20% annually. But since 2013, the company’s financial performance has leveled off, Lo acknowledges.

It would be easy to blame the Japanese yen, which was strong in 2013 and harmed the sales of Hitachi products in China. Techcomp might also attribute its lackluster performance to new red tape that government labs in China must confront before they are allowed to buy instruments made abroad. And Techcomp could just tell its investors—the company has a dual listing in Singapore and Hong Kong—that growth will soon resume because China is about to invest massively in food safety labs throughout the country.

Lo says the problem is actually that Techcomp became too focused on China, so he has opted to put the company on a “sustainable” growth path that is less sensitive to what’s happening there. But the firm’s distribution-plus-manufacturing strategy isn’t changing.

Indeed, Lo says the geographic expansion of Techcomp’s distribution empire is proceeding well. Since 2012, his company has been the exclusive distributor in Western Europe for instruments made by Hitachi group company Hitachi Koki. In 2004, Techcomp started representing Hitachi Koki as well as Hitachi High Tech across all of Asia except for Japan.

And since 2009, Techcomp has acquired five instrument makers in North America and Europe. “To achieve sustainable growth in the coming 10 or 20 years, we have to move to the major markets of Europe, the U.S., and Japan,” Lo says.

In early 2013, for example, Techcomp bought Edinburgh Instruments, a Scottish maker of gas sensors and spectrometers. In the U.S., Techcomp was motivated to buy Bruker’s GC business because the U.S. firm’s advanced chromatographs complement the more basic ones Techcomp makes.

SLAS’s Hamilton sees further opportunities to buy innovative instrument manufacturers in Europe and the U.S. “There has been quite a bit of consolidation in the U.S. and European lab instrument market,” he says. “Consolidation often leads to displaced people starting new companies, and they’re often undercapitalized.”

Techcomp tries to add value to the companies it acquires in Europe and the U.S. by integrating their operations with its Shanghai plant. Although it doesn’t shut Western operations down, Techcomp can lower their manufacturing costs with cheaper parts from China. And Techcomp’s scientists and engineers in Shanghai can help speed up the product development efforts of their counterparts in Europe and the U.S.

Conversely, the Western companies that Techcomp acquires make the group better by contributing managerial talent. One of Lo’s goals is to put foreign managers in senior positions as he aims to return his company to its traditional expansion rate of 20% per year. “Our management team is getting old and conservative, so we need new blood to give us some energy again,” he says.

Those doing business with Techcomp for the first time should expect a company that lays all its cards on the table. They will also discover a company with an aggressive stance toward growth, never mind the claims of being old and conservative.