Five refrigerants that won’t harm stratospheric ozone and have lower global warming potentials than many similar products got a green light from the Environmental Protection Agency last week. 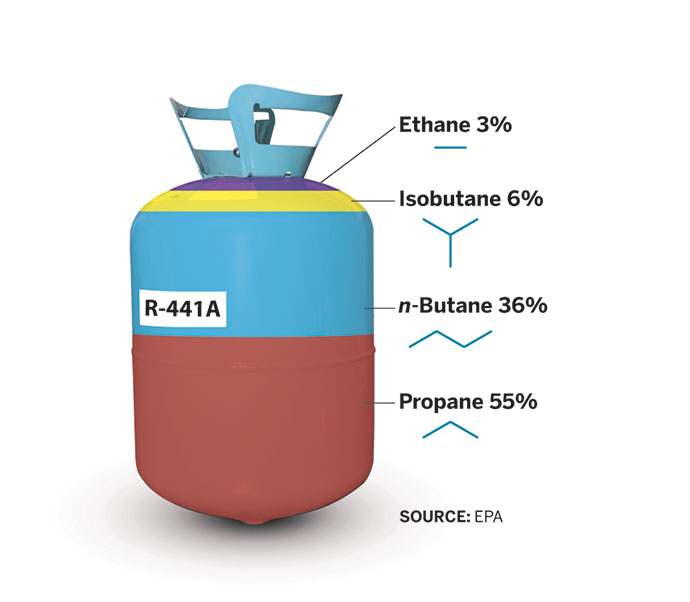 The five products—one hydrofluorocarbon (HFC), three short alkanes, and a blend of hydrocarbons—are already used in Asia and Europe, the agency says.

EPA approved the products via a part of the Clean Air Act designed to ensure that new refrigerants are less environmentally damaging than those they replace. The agency approved ethane for low-temperature refrigeration units; isobutane for retail refrigeration units and vending machines; propane for home refrigerators and freezers and vending machines; difluoromethane, also known as HFC-32, for room air-conditioning units; and the hydrocarbon blend R-441A for retail refrigeration, vending, and room air-conditioning units.

EPA Administrator Gina McCarthy called the agency’s action “an example of how we can turn the challenge of climate change into an opportunity to innovate our way to a better future.”

In the new rule, the agency exempts the four hydrocarbon products from the Clean Air Act’s prohibition against discharging refrigerants to the atmosphere. “Current evidence suggests that their venting, release, or disposal does not pose a threat to the environment,” the agency explains. Other refrigerants, including HFC-32, must be captured during maintenance or the disposal of cooling equipment.

Stephen Van Maren, a director with the Alliance for Responsible Atmospheric Policy, an association of chemical makers and refrigeration and cooling companies that rely on HFCs and ozone-depleting hydrochlorofluorocarbons, says he expects to see a variety of repercussions from the new regulation. “The ability of companies to adapt to the provisions of the rule varies quite a bit by sector and company,” Van Maren tells C&EN.

Comments
Clint (March 16, 2015 12:38 PM)
I guess the EPA does not know that alkanes are highly flammable. A leak around the sparking compressor of someone's home refrigerator should be wonderful fireworks.
Reply »