[+]Enlarge
Credit: Shutterstock
Hold on: The microbes you encounter on the subway aren’t so bad, study suggests. 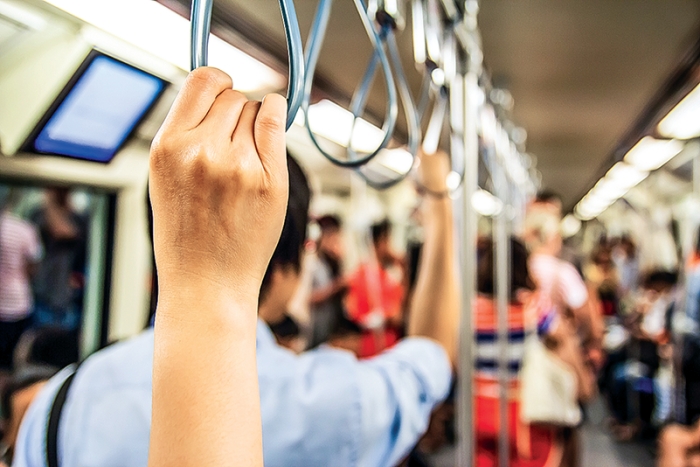 Credit: Shutterstock
Hold on: The microbes you encounter on the subway aren’t so bad, study suggests.

Most people riding public transportation try not to think too hard about what germy substances might be lurking on the ticket machines, handrails, and benches in highly trafficked stations and train cars. Commuter Christopher E. Mason isn’t one of those people.

After seeing his daughter, Madeleine, put communal toys in her mouth at day care, the genomics professor began pondering the microbial makeup of surfaces that people interact with every day. Used by more than 1.7 billion people each year, the New York City subway system, which Mason rides to get to work at Weill Cornell Medical College, came to mind as a network of microbe-laden surfaces ripe for analysis.

So he gathered a team of students and postdocs and in 2013 launched PathoMap, a project to characterize the microbial ecosystem, or microbiome, of an entire city. The researchers visited every station along the 24 subway lines of the NYC Metropolitan Transit Authority; swabbed turnstiles, garbage cans, and kiosks in each; and then sequenced the DNA they collected.

Mason’s group recently published its baseline microbial map of the Big Apple (Cell Systems 2015, DOI: 10.1016/j.cels.2015.01.001). What the researchers found, he says, is that “the subway system is not something to fear.” Of the 640 species of microorganisms the team identified, most of them were normal bacteria found on the human body. Only 12% were pathogens. And even though one of these pathogens was the plague-causing bacterium Yersinia pestis, Mason says this malicious microbe was at low levels and appeared to be deceased: His team wasn’t able to grow a culture from its sample.

Despite New York City’s reputation as a hotbed for the arts, one type of organism the PathoMap team didn’t find there was a musically inclined microbe. Had the researchers looked across the pond, at the University of Plymouth in southwest England, they might have spotted Physarum polycephalum.

BIOCOMPUTER MUSIC
Credit: ICCMR/Plymouth University
In this clip, Miranda describes how his research group has interfaced a slime mold biocomputer with a piano to produce original musical compositions.

Last week, this bright-yellow, single-celled organism—commonly referred to as a slime mold—played a piano duet with Eduardo R. Miranda during the university’s Peninsula Arts Contemporary Music Festival. Miranda, a professor of computer music, has been working for years to couple living tissue, such as nerve cells, with silicon-based processors to build so-called biocomputers. 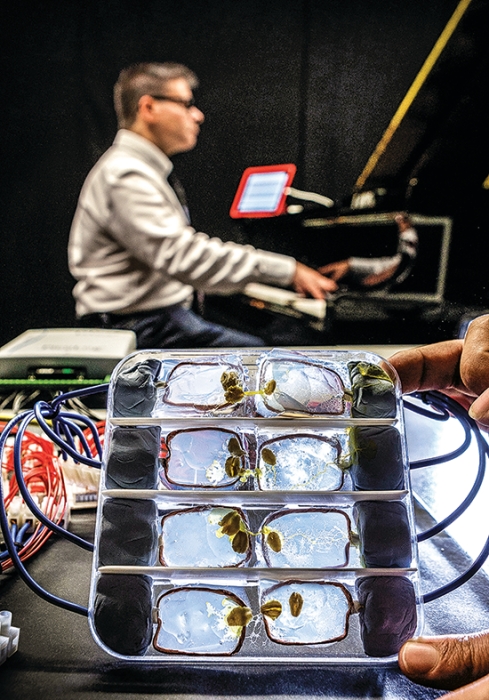 When he discovered P. polycephalum, he tells Newscripts, he was thrilled because “it’s much easier to handle than cultured in vitro neural networks.” So he and his team began experimenting with the amoeba-like organism, which grows a network of tubules to access food sources.

The researchers grew slime molds over a series of agar-coated electrodes. As the molds colonized the electrodes and spread their tubules, they emitted electrical signals that the electrodes detected. In 2011, the team demonstrated its working biocircuit using a synthesizer to convert the mold signals into musical tones (J. Bionic Eng., DOI: 10.1016/S1672-6529(11)60016-4).

The recent pi­ano concert, Miranda says, was a real-world test of his group’s biocomputer.

As Miranda struck the piano’s keys, electromagnets within the wired-up instrument converted the tones into electrical impulses. These impulses stimulated the slime molds, prodding the organisms to respond with impulses of their own. The piano received and translated those signals into a musical accompaniment.

Miranda reports that P. polycephalum was a festival crowd-pleaser: “We had to run the performance twice to accommodate the high number of people who turned up to see it.”