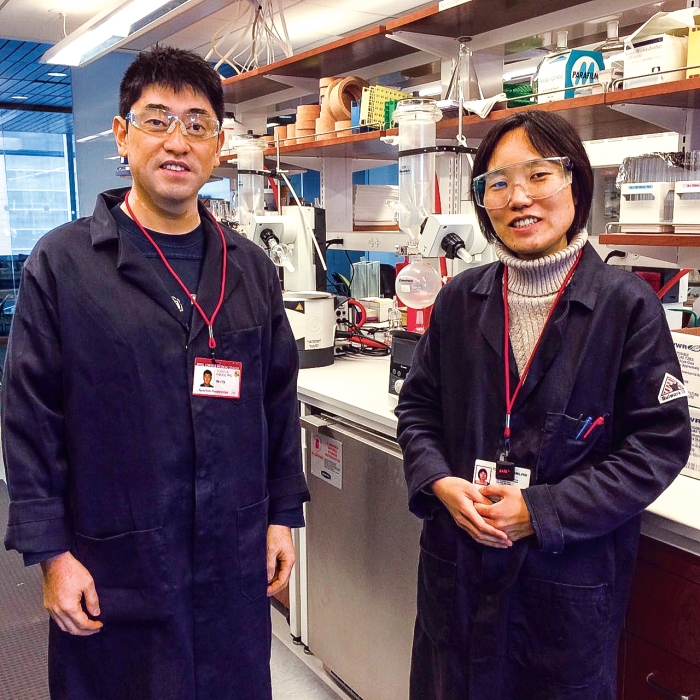 “That’s Memorial Sloan Kettering across the street,” says Michael A. Foley, looking out the window of a conference room down the hall from his 16th-floor office in Manhattan. “We are sitting in a Weill Cornell Medical Center facility, and we can see all the way up to Harlem looking through the lab.”

Beside Foley sits an out-of-towner. Kazuyoshi Aso, a medicinal chemist employed by Japan’s Takeda Pharmaceutical, heads a team of 16 medicinal chemists from his company currently occupying Tri-I TDI’s new, $20 million facility under a five-year partnership. The chemists, all from Japan, will work with principal investigators from the three academic institutions on identifying drug prospects.

Tri-I TDI is a new entrant in a broader effort across New York City to develop a pharmaceutical research hub on par with those in Boston, San Francisco, and San Diego. Foley and others point to decades of high-quality, Nobel Prize-winning research in New York City and to a new spirit of collaboration between institutions that historically had little interaction. Foley also points to connections being forged between these institutions and companies ranging from start-up biotechs to large drugmakers.

Previously at the Broad Institute, where he headed the Chemical Biology Platform, Foley is the cofounder of four companies, including Infinity Pharmaceuticals and CombinatoRx, both of which went public. He also cofounded the Institute of Chemistry & Cell Biology at Harvard University. His mission at Tri-I TDI is to foster partnerships for early-stage research and the development-oriented science required to identify and advance drug candidates.

Foley and Aso view the Takeda partnership, Tri-I TDI’s first and only, as mutually beneficial. “People like Kazu who come with 25 years of hard-core medicinal chemistry can teach the faculty a tremendous amount about how that chemistry can advance their projects,” Foley says. “And they get the benefit of seeing novel biology that they’ve never seen before within the walls of Takeda.”

The shift, according to Aso, requires that Takeda develop external partnerships and access the kind of resources, especially in biology, that are found in great abundance at the New York City research institutions.

On the face of it, the partnership between Tri-I TDI and Takeda is not unlike other recent ventures around the world—including some in New York City. For example, the Alexandria Center for Life Science, a multitower research center that opened in 2011, is occupied by researchers from Pfizer, Eli Lilly & Co., and Roche, all of which came to New York to collaborate with the city’s research institutions. The Seattle-based Accelerator venture fund is also leasing space at the center to support small, scientist-run companies.

But Tri-I TDI distinguishes itself with a somewhat lighter touch, providing industry partners with lab space in which to work with academic scientists without actually leasing the space. It is not competing with Alexandria, Foley says. “As the ecosystem expands in the city, the critical missing piece will be lab space.”

The partnership with Takeda presents some unique challenges, Foley acknowledges. “There are three great social experiments going on here,” he says. “The research culture at Takeda is evolving. There is an influx of industry drug discovery experts coming to interface with pure academics. And then, it’s Japan-meets-the-U.S. at a personal level of the scientists adjusting to New York, a new language and home, and cold that they’ve never experienced.”

For those Takeda scientists who have studied and worked outside of Japan, the adjustment may not be terribly arduous. Aso notes that he worked for Takeda in Boulder, Colo., which has far fewer Japanese cultural amenities than Manhattan. But it is hard to downplay the complexity of cultural exchange in the partnership compared with one between Tri-I TDI and a U.S. or a European drug firm.

Indeed, several Western companies expressed an interest in partnering with Tri-I TDI. Takeda, which was selected by the presidents of the three member institutions, had an edge in the selection process on a personal level, Foley says. “A key factor was Tachi Yamada.”

Recently appointed chief science officer at Takeda, Yamada has spent a lot of time outside of Japan. He is the former head of research at GlaxoSmithKline and was president of the global health program at the Bill & Melinda Gates Foundation. A pioneer in collaborative research, Yamada is very familiar to the pharmaceutical research community in New York.

“He helped build this model,” Foley says. “It was his vision for what the partnership would look like that made it no contest with anyone else.”

Under the terms of the partnership, Takeda can make the first offer on any project presented by an investigator. Other companies can make bids if an agreement is not reached.

Programs not taken by Takeda will be “nicely positioned for Accelerator or other venture capital spinouts,” says Misti Ushio, executive vice president of the science-oriented investment firm Harris & Harris, which is an investor in the Alexandria Center. “I think it’s creative thinking, and I think Takeda showed some guts to come in and do something like that.”

Aso’s group is already in partnership discussions on a project that was selected from an original round of 40 proposals from primary investigators at the three institutions. “It is a very exciting novel target in pain where you would have the analgesic effect of morphine without any of the addiction and respiratory depression,” Foley says.

Having worked through a round of proposals, the Takeda chemists say they have a good feel for New York science culture. Although the basic approach to science is no different at Tri-I TDI than at Takeda, according to Yoshiyuki Fukase, director of medicinal chemistry at Tri-I TDI, project management is significantly more streamlined.

“Goals are set at Takeda, but there are daily and weekly goals here, and you have to prioritize projects constantly to meet them,” says Fukase, who will be at Tri-I TDI for three years. “At Takeda, you need to complete a goal 100%. Here, if you get to 80%, it can lead you to the next step.”

Tomoko Ashizawa, a medicinal chemist in Takeda’s central nervous system drug discovery unit now working at Tri-I TDI, adds that a flat management hierarchy also tends to accelerate progress. “In Japan, it is very difficult to speak to someone at a management level,” she says. “Here, I can walk over to Mike Foley’s office, knock on his door, and engage in conversation with him. It is very easy to communicate.”

Ashizawa, who studied chemistry at California Institute of Technology and RWTH Aachen University in Germany before completing her Ph.D. in Japan, adds that simply living and working in New York City has a stimulating effect.

“The people here are so energetic, and I can absorb that energy,” she says. “New York feels like a place that is perfect for working really hard. I used to live in California, and I can feel the difference.”