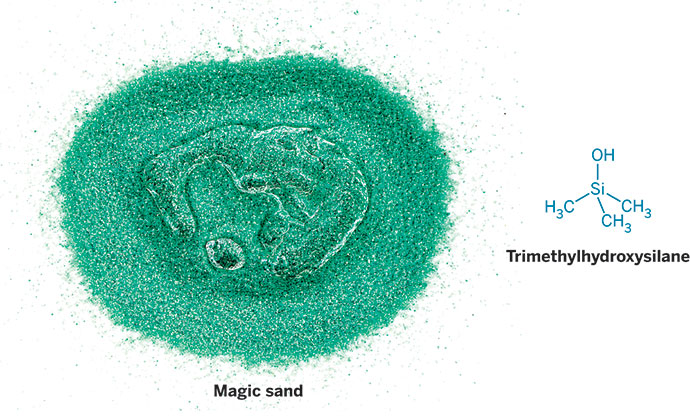 The basis for two popular educational toys is something you can find in great abundance on the beach. But magic sand and kinetic sand have a little extra chemical kick that makes them act quite unlike their boring beach-bum cousin.

At first glance, magic sand seems a lot like traditional sand, if you ignore its often vibrant color. Magic sand is granular; it slides through your fingers just like the beach variety.

But when you place it underwater, magic sand starts revealing its unusual characteristics.

Underwater, magic sand can be shaped and molded into fun shapes, such as a castle or an apple, without creating a cloudy suspension of sand grains. And if you pour away the water, a magic sand sculpture collapses into a pile of completely dry sand, instead of maintaining its shape as wet beach sand does.

That’s because magic sand repels water instead of absorbing it. Even after being submerged in water, this curious sand stays dry.

To produce magic sand, companies start with standard sand, silicon dioxide, and then add a very thin layer of a chemical called trimethylhydroxysilane. This coating makes the sand hydrophobic, or water-repellent. That’s in contrast to standard beach sand, which is hydrophilic, or water-loving.

The trimethylhydroxysilane may not entirely coat a sand grain, but these hairlike molecules wave their hydrophobic ends to repel the water, explains chemist Kathleen Carrado Gregar of Argonne National Laboratory, who once wrote a lesson plan on magic sand for the American Chemical Society.

Aficionados often notice a silvery shimmer of trapped air surrounding a magic sand sculpture when it is submerged underwater. This trapped air acts as a middleman between the hydrophobic coating and the hydrophilic water.

The trapped air also helps the water swiftly slide off the magic sand without wetting it, says Brian C. Utter, a physicist at James Madison University. Utter studies the movement of sand, so it wasn’t too surprising when a friend gave him a bag of magic sand as a joke. It didn’t take long before he pulled the magic sand off of his shelf and started using it with his undergrad students in experiments about how sand moves when shaken. He now buys the toy in 50-gal drums.

Magic sand was originally developed to clean up oil spills. The idea was that the coating would repel water but help attract and trap oil. Although scientists did try using it to clean up spills, the modified sand’s main claim to fame is as a toy. It is also a useful tool for science teachers to explain the difference between hydrophobic and hydrophilic materials, says Michael Chapman, who teaches seventh-, eighth-, and ninth-grade science at Boston College High School.

Although magic sand is made in factories, it mimics a phenomenon that happens occasionally in soil, especially after forest fires, explains plant scientist Xi Xiong of the University of Missouri, Columbia. During a fire, the rapid decomposition of organic matter produces organic acids that coat soil particles and make them hydrophobic, she says. This can be a problem because water can pool around the sand rather than flowing to streams and rivers.

Kinetic sand, on the other hand, has no analogy in nature. Like magic sand, kinetic sand is coated beach sand. In this case, the coating is poly(dimethylsiloxane), a stretchy substance that often shows up in products like Silly Putty.

Like the magic sand coating, poly(dimethylsiloxane) is hydrophobic, Carrado Gregar explains. But with kinetic sand, the thick, viscous coating’s main role is to help the sand stick together so it can be cut and molded without making a mess. That allows kids and adults alike to build sand castles right on their desks without stray granules of sand accumulating where they don’t want them.

Kinetic sand’s sticky properties also make it easier to clean up, presumably a major incentive for toy-buying parents and neat-freaks with a penchant for building sand sculptures.

junervy (September 24, 2015 8:14 AM)
Looking to do more than just play with the sand for drop-in science at a children's museum. Going to check out the hydrophobic quality and then try it with the kids. Thanks!
Reply »

Benjamin D. U. Hur (December 2, 2016 3:13 AM)
Well, it is an excellent article. However, I've got to point out a key parameter to enhance its functionalities such as dilatancy or auxeticity or viscoelasticity in addition to "self-healing" and/or "grab-release mechanism". That key ingredient is proprietary.
Reply »

Benjamin D. U. Hur (December 2, 2016 3:18 AM)
Well, it is an excellent article. However, I've got to point out a key parameter to enhance its rheological flow properties such as dilatancy or auxeticity or viscoelasticity in addition to "self-healing" and/or "grab-release mechanism". That key ingredient is proprietary.
Reply »