A major chemical company such as BASF could undoubtedly ferry rice farmers to a fancy hotel in a major city so they could participate in the debut of a pesticide. But last month, the company instead chose to launch its newest rice fungicide, Seltima, in the rice paddies of Jombang, a small town 50 miles southwest of Surabaya, Indonesia’s second-largest city.

The green paddies proved a far more memorable setting than a big-city hotel. And beyond being scenic, the choice of venue served a practical purpose. Within their familiar surroundings, the hundreds of local rice growers who attended the event formed a relaxed but focused audience that asked thoughtful questions. BASF had in the past bused local farmers to fancy city venues, only to discover that they were ill at ease and unreceptive in the alien environment.

In Jombang, BASF staff members hit the right notes and made the audience comfortable. Judging by the loud but friendly heckles, Vinda Amelia Sali, a Jakarta-based branding and communications manager for BASF, was embraced like a local when she walked on the stage to act as the master of ceremonies. And Saurin Shah, BASF’s India-born crop protection business manager in Indonesia, received an enthusiastic response when he delivered half of his opening speech in Bahasa, Indonesia’s national language. 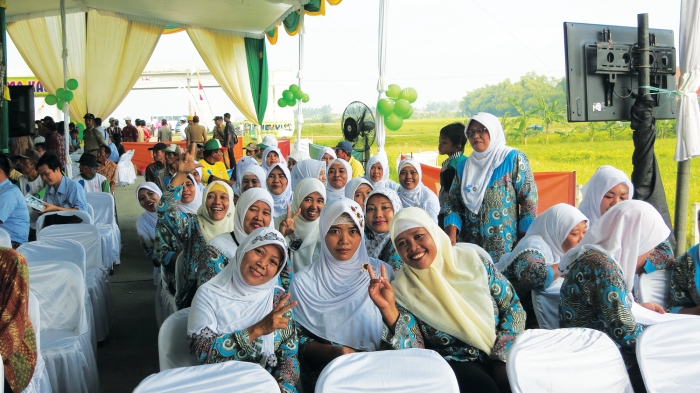 With a fast-rising 250 million mouths to feed and a national goal of food self-sufficiency, Indonesia is an important market for major crop protection firms. But one of the challenges the companies face is getting their message out to farmers in a country that is a vast archipelago. Major players such as BASF grab what chances they can get to interact directly with farmers.

“For BASF, the challenge in Indonesia is one of physical distribution of our products,” said Leon van Mullekom, the company’s Dutch-born and Singapore-based director of crop protection in Southeast Asia. “But we also need to reach out to farmers to show them how to use our products properly and safely.”

In Indonesia, the use of advanced technology could have a dramatic effect on crops. BASF data indicate that the country’s average rice yield of 5.1 metric tons per hectare (about 4,500 lb/acre) is well below that of Japan and China, where the average yield is 6.7 metric tons per hectare. Seltima can increase yields in Indonesia by 10 to 15%, van Mullekom claimed. “Using Seltima easily pays off the small investment it requires.”

To demonstrate to growers why they should buy BASF products, the company has set up “field schools” where farmers can test them. The company also depends on its distributors to reach out to Indonesian growers and provide financing to those who don’t have the cash flow required to pay for products such as Seltima. But most farmers can afford the product, van Mullekom said, noting that many have a motorcycle and a mobile phone.

The field schools appear effective at communicating what BASF products can achieve. Rohmat Agus Mulyno, the leader of an informal co-op of about 20 Jombang farmers, reckoned that Seltima will deliver impressive results once deployed. The members of his group already achieve an above-average 6 to 8 metric tons per hectare without using Seltima. But having observed the results obtained at the nearby field school, Mulyno predicted that BASF’s fungicide could easily raise yields to 13 metric tons per hectare.

In Jombang, the weather allows growers to generate three rice harvests per year, Mulyno noted. He expects members of his group to start using Seltima next season, which is just a few weeks away. Using the product will prove worthwhile even if its effectiveness starts to drop over time, he said. Mulyno has observed that crop protection technologies normally start to become less effective after a few years.

Seltima does not contain a new active ingredient but rather a previously launched BASF fungicide, pyraclostrobin, which belongs to the strobilurin family. The novelty in Seltima is an encapsulation technology that allows the active ingredient to slowly release directly on the rice leaf surface. Because fighting fungus generally makes plants stronger, BASF markets Seltima as part of its AgCelence line of plant health products.

The product was launched first in Indonesia largely because it’s the first country where the government authorized its use. Even though Seltima does not feature a novel ingredient, its slow-release technology requires a new registration with authorities. BASF will roll out the product in other parts of the world in coming months.